The factory Honda Civic Type R driver started the race, which featured all drivers on the same medium tyres and with no ballast, on the front row and tracked early leader Jack Goff's Eurotech Racing Civic.

Goff led the opening spell of the race, which was interrupted with a safety car after a collision between Tom Oliphant's Ciceley Mercedes and Brett Smith's Eurotech Honda during their battle on the fringes of the top 15.

Goff controlled the restart on lap five of the 20 but was always under pressure.

Just before half-distance a rain shower swept across the circuit and the leader was the first to find the slippery surface - slewing wide at the Riches and into the following hairpin.

That let Neal through into first place and allowed Speedworks Motorsport Toyota Avensis driver Tom Ingram to make it a three-way fight for the win.

Neal was under pressure all the way to the flag but held on for his second victory of the season and his 63rd BTCC career win.

"I really didn't know what to expect from that, so I am over the moon," said Neal.

"The engineers were telling me over the radio to be careful in the conditions, but I couldn't, because the other two were straight back on me. It was hard work, but worth it." 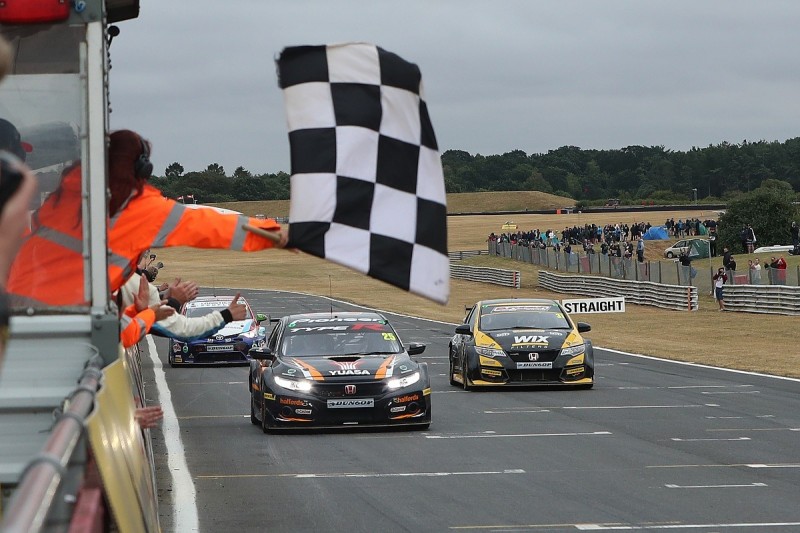 Goff said he had been warned of the rain on his pits-to-car radio, but was unable to avoid his minor slip.

"I was being told just as I hit the rain," he said. "But I was pleased to bank the points. This has been a great weekend despite not scoring in the second race - so I have to be pleased."

Ingram had a couple of attacks at Goff's second place but, with the championship lead in his pocket, he was satisfied with third spot.

"I was quicker than Jack and Matt at certain points of the track and they were quicker in others, so it was ebb and flow," he said.

"But I was thinking about getting to the finish and getting as much as I could. We needed this and we have bounced back to the top from a long way behind."

Andrew Jordan took fourth in his WSR BMW 125i M Sport ahead of Tom Chilton's Motorbase Ford Focus, while there was a huge dogfight in their wake.

Sixth eventually fell to Colin Turkington in his WSR BMW. He finally unseated a dogged Chris Smiley (BTC Norlin Honda) to grab the slot in his badly damaged car, which had started in eighth position.

While Smiley was destined for retirement, Josh Cook took seventh from Matt Simpson.

Reigning champion and race two winner Ash Sutton was the last classified finisher after a troubled race that began with a penalty for a grid infringement.