Josh Cook has broken his victory duck in the British Touring Car Championship, taking his Power Maxed Racing Vauxhall Astra to an untroubled win in the opening round of the weekend

The polesitter was challenged on his way to the opening corner by fellow front row starter
Chris Smiley in his BTC Norlin Honda Civic.

Smiley nosed ahead going through Holly Wood but Cook reasserted himself at the head of the pack by the left-hander of the Craner Curves.

Smiley struggled on the harder Dunlop option tyres and Team Dynamics Honda Civic driver Dan Cammish, who had made a rapid getaway from the second row, followed Cook through.

Cook was able to pull away over the latter stages and eventually crossed the line nearly 3.5 seconds clear of his rival.

"I didn't make the best of starts and the car was a bit loose to begin with," said Cook.

"I was battling with Smiley but he gave me just enough room at the Craners. From there, I was able to get my foot down.

"It is a credit to the team - the car was perfect. Once I got a gap, I overtook [the lapped]
Matt Simpson and put him between me and Cammish. I was hoping that it would break
[Cammish's] soul. It seemed to work." 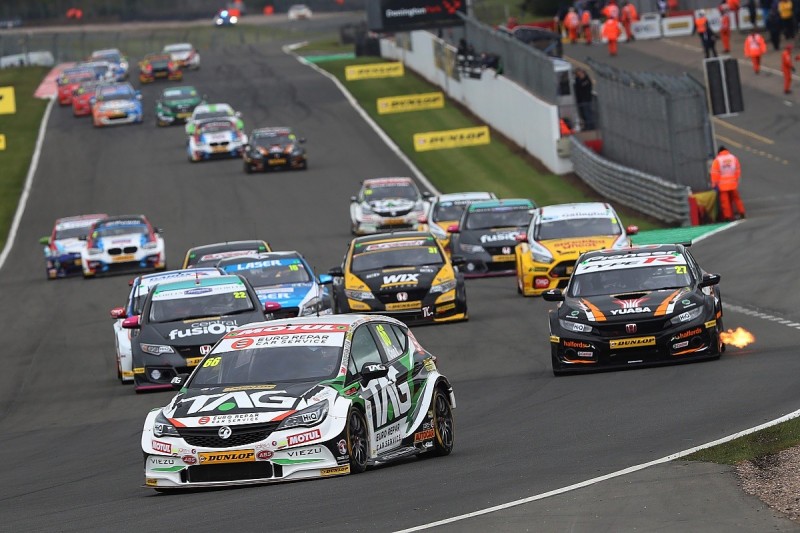 Cammish, who took his first career podium in the BTCC, said that he was just unable to
match the performance of Cook.

"He did break my spirit a little bit," admitted the Honda man.

"Credit to Josh, he was perfect throughout and there was just nothing I could do to match him. But I am pleased with this result. Our Civic is a new baby and we are still learning about it."

Behind them, Sam Tordoff was running in a strong third place in his Motorbase Performance Ford Focus.

He was in touch with Cammish until lap 10, when he was forced into the pits with a suspected electrical problem which was hampering his gear changes.

Matt Neal finished sixth in his Team Dynamics Honda Civic after a battling from 17th. He was into the top 10 after five laps and picked his way further forward to the flag.

Reigning champion Ash Sutton, who had started in 22nd spot after engine problems in
qualifying, climbed up to 12th spot at the flag.