The reigning Independents Trophy holder battled from 13th on the grid to capitalise on his lack of success ballast and the use of favourable medium tyres to take victory.

He capitalised on the lack of pace from those ahead with weight and the harder rubber to jump into the top six after two laps, and picked off the opposition from there.

Behind leader Dan Cammish (Team Dynamics Honda), Chris Smiley struggled on the harder tyres on his BTC Norlin Civic and a queue formed behind him.

Ingram passed Moffat and zeroed in on Smiley.

Smiley had dragged up to the bootlid of Cammish, on the harder tyres and with 66kg of ballast.

He managed to overhaul the leader going into the Old Hairpin, and Ingram managed to leapfrog the hamstrung car on the run to McLeans.

The top two set off in a private dual, with Ingram finally managing to unseat Smiley going into the chicane. 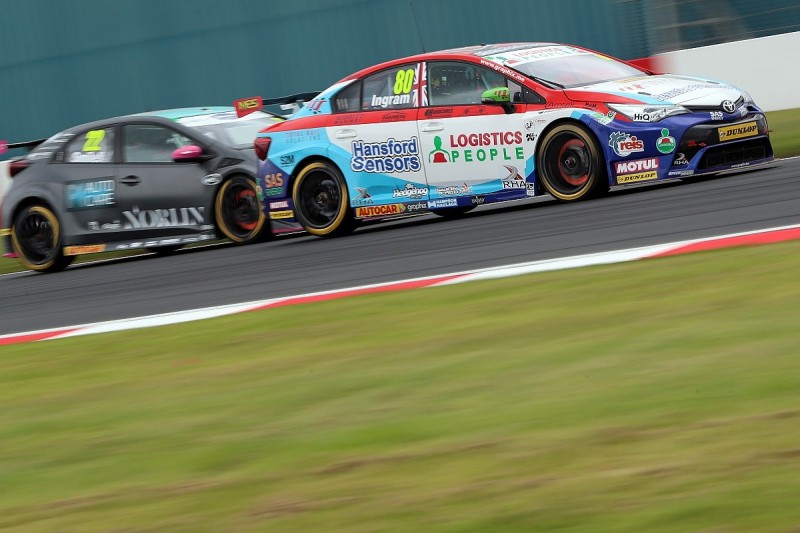 "The car was sensational all the way through - with no weight on, we have one hell of a car" said Ingram, who extended his lead at the top of the table.

"Our car has been strong on the mid-corner to exit - like it was at Brands Hatch - and that was what made it possible for me to jump Smiley.

He made things tough for me, but he was fair and didn't make any mistakes."

Smiley held on for second place, which marked his best BTCC career result to date.

"Tom had more pace than me at the end, and I simply didn't want to do anything stupid and throw it all away. I am delighted though."

Jack Goff, who had mirrored Ingram's progress from 12th on the grid, jumped ahead of Cammish to grab the final podium slot.

Adam Morgan came from 22nd on the grid after a clash in race one to take his Ciceley Motorsport Mercedes-Benz A-Class to fifth ahead of Motorbase Performance man James Cole.

Polesitter Josh Cook, who had the harder tyres and 75kg, was powerless to halt his slide to seventh place after the 16 laps.

Double champion Colin Turkington had been due to start in ninth place, but his WSR car was wheeled off the grid with a water system problem.

It was fixed and he returned to action, but pitted for good later on.

Rory Butcher, who took his AmDTuning.com MG6 to ninth place, has been drawn on pole for the reserved grid race, and he will share the front row with Ash Sutton's Subaru Levorg, which had finished eighth.