Team BMR driver Sutton brought his Subaru Levorg home in third - behind the race winning Toyota Avensis of Rob Austin and Eurotech's Jack Goff - to claim the championship by an eventual winning margin of 21 points.

Sutton started the damp reversed-grid race two places behind WSR driver Turkington in 12th, with the pair working their way up the order in the opening sequence of corners in tandem.

Turkington put a car between himself and Sutton at the final corner on the opening lap by overtaking the Honda Civic Type R of Goff at Clearways to cross the line in fifth place, and then set about chasing after the leading quartet.

But Turkington's charge was brought to a premature end a matter of corners later, after a clash between him and Mat Jackson's Motorbase Ford Focus broke Turkington's rear suspension.

Speedworks Motorsport driver Tom Ingram tapped Jackson on the approach to Graham Hill bend and, seeking an opportunity to put more cars between himself and Sutton, Turkington went to overtake the pair on the run to Surtees.

Turkington cleared Ingram's Speedworks Motorsport Toyota Avensis but, as he moved back on to the racing line, he and Jackson made contact that broke the right-rear upright on Turkington's BMW 125i M Sport.

The Northern Irishman returned to the pits but retired from the race with terminal damage. 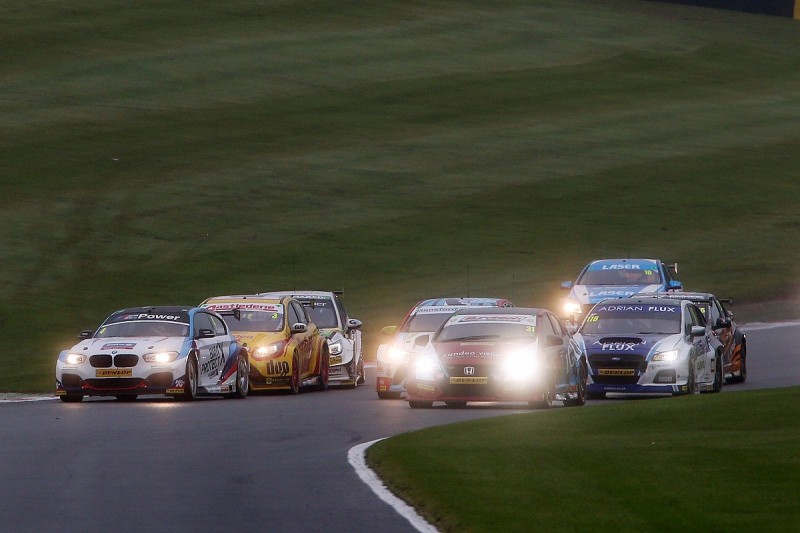 That left Sutton - promoted to fourth as a result of the collision ahead - with an unassailable lead in the championship and able to cruise home to the finish.

While Austin had raced well clear at the front of the pack, Sutton clung to the back of Goff and the pair cleared the polesitting Team Hard Volkswagen CC of Mike Epps at Druids at mid-distance, three laps after a safety car period - thrown to recover the stranded Vauxhall Astra of Senna Proctor - had ended.

Sutton stalked Goff thereafter but did not attempt an overtake, and instead settled for third across the line to confirm a first crown in only his second season in the series.

"It's been a great team effort and I can't thank the team enough for this. It's a dream come true."

Austin eventually won the race by 3.185 seconds, in the final race for his Handy Motorsport team's Toyota Avensis before the squad switches to run an Alfa Romeo Giulietta from 2018, ahead of Goff.

Behind Sutton, Ingram was fourth in his Toyota Avensis and with that claimed third in the drivers' standings, beating Team Dynamics' Gordon Shedden by two points.

Epps clung on to finish a strong fifth ahead of Shedden's Civic, with Jackson bringing his Focus home in seventh and the second Dynamics Civic of Matt Neal finishing eighth.