Tom Ingram scored a thrilling last-lap win in the second British Touring Car Championship race of the day at Brands Hatch to move himself into the series lead.

Ingram’s Excelr8 Motorsport Hyundai i30 N was in fourth place with 12 laps remaining, but he made a late move on Tom Oliphant to snatch his second victory of the season.

Oliphant, carrying the full 75kg of success ballast on his West Surrey Racing-run BMW 330i M Sport following his win in race one, was a gargantuan 2.045 seconds clear of the field at the end of the first lap, but his good work was undone by a safety car.

Gordon Shedden had made a poor start from the outside of the front row in his Team Dynamics Honda Civic Type R, and then got nudged sideways at Paddock Hill Bend by Jake Hill.

The three-time champion was 13th at the end of the first lap, and then came under attack into Paddock Hill Bend from the WSR BMW of Stephen Jelley.

There was contact between the pair, and Jelley went onto the grass, then sailed helplessly across the track and ushered the Honda into the gravel.

While Jelley hit the barrier and needed retrieving, Shedden got back on track but could only progress to 22nd by the finish.

Dan Rowbottom in the other Dynamics Honda was running second at the restart ahead of Ingram, but Oliphant made a good getaway to re-establish himself at the front.

Ingram, in fact, lost a place to Hill, who got his Motorbase-run MB Motorsport Ford Focus on the inside of the Hyundai at Clearways, and then completed the move at Paddock.

Now Oliphant’s ballast was beginning to tell, and up to seven cars were circulating in the leading group, before a front-left puncture sent third-placed Hill off the track at McLaren and into the pits. 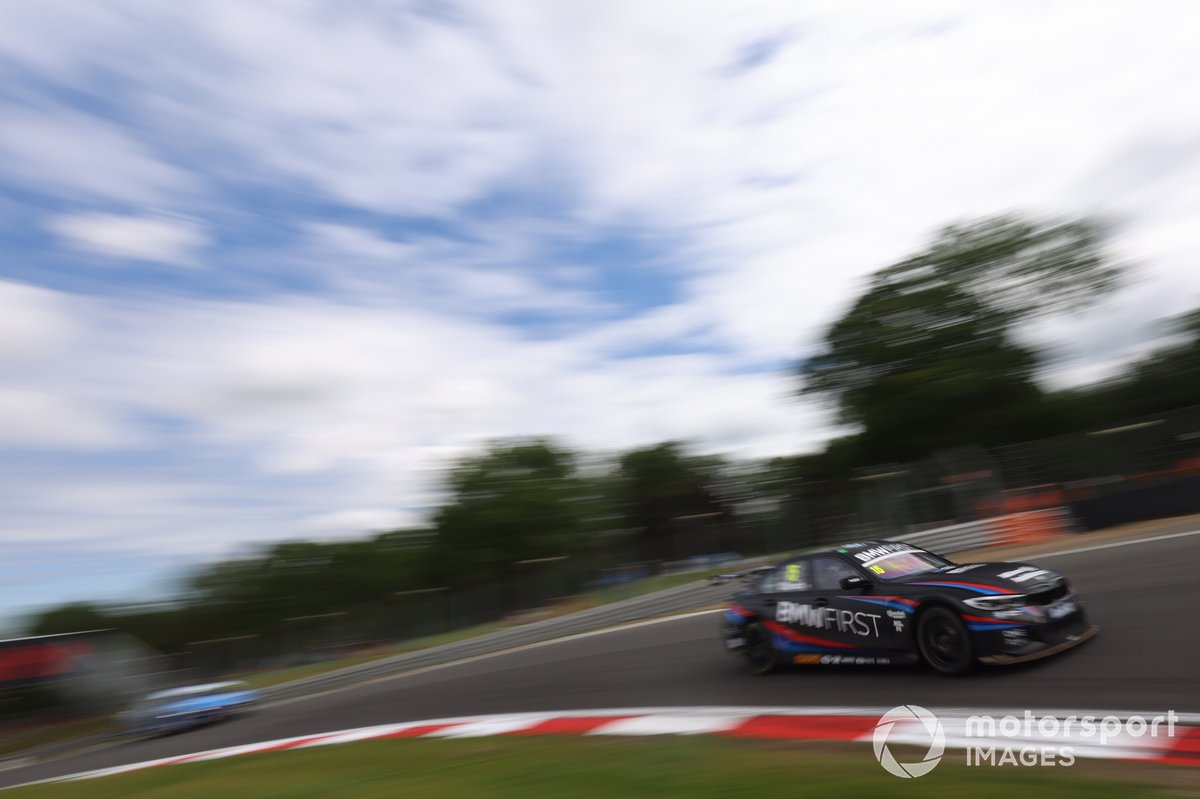 With 10 laps to go, Rowbottom, his Honda carrying 57kg of ballast, made a move outside Oliphant at Druids.

There was contact between the pair as they went downhill on the exit, and Rowbottom ran wide at Graham Hill Bend, promoting Ingram to second.

There were nine laps remaining for Ingram to try a move, and it finally came at Paddock on the last tour.

Ingram saw a gap, and inserted the Hyundai into it, only for Oliphant to close the door and the two to make contact, right-rear to front-left.

Both controlled the moment beautifully, with Oliphant still narrowly ahead, but Ingram had an overlap on the inside up to Druids and completed the move.

Worse was to come for Oliphant, who drifted wide out of Clearways, allowing the Laser Tools Racing Infiniti Q50 of Ash Sutton to pip him to second.

“It was just a case of biding my time,” said Ingram, whose Hyundai was carrying 33kg of ballast.

“There were a lot of quick people around me, and I could have done something half-arsed that didn’t pay off.

“Tom left me a massive gap, and I’m not going to not fill it on the last lap, am I?”

Rowbottom, who had conceded third place to Sutton at Surtees on the penultimate lap, came home in fourth, while the BTC Racing Honda of Josh Cook and Power Maxed Racing Vauxhall Astra of Dan Lloyd were also in the leading group, fifth and sixth.

Ingram drew the number 12 from the reversed-grid ballbag, meaning Adam Morgan will start the finale from pole in his Ciceley Motorsport BMW.

It was another bad race for Colin Turkington, who was 17th in his WSR BMW.