BMW racer Tom Oliphant held on to secure victory from a fast-closing Gordon Shedden in the first race of the British Touring Car Championship round at Brands Hatch.

While poleman Dan Rowbottom let his revs drop too far and struggled away from the start, Oliphant lit things up in his rear-wheel-drive, West Surrey Racing-run BMW 330i M Sport to surge from fourth on the grid into the lead by Paddock Hill Bend.

Aiden Moffat was another rear-driven racer on a mission, and the Scot, from fifth on the grid, sailed his Laser Tools Racing Infiniti Q50 around the outside of Shedden’s front-row-starting Team Dynamics Honda Civic Type R at Paddock Hill Bend to move into second.

Tom Ingram also got ahead of Shedden at Graham Hill Bend, but ran wide at Clearways, allowing the three-time champion back into third.

Shedden, with the other LTR Infiniti of Ash Sutton in tow, then homed in on Moffat.

Sutton tried to round Shedden at Paddock on the fifth lap of 24, before Shedden then got inside Moffat at Druids to move into second.

At the end of that lap, Oliphant was 3.776 seconds to the good, and the gap remained above 3s until lap 14.

From that point on, Shedden set the fastest lap and began taking bigger chunks out of the BMW.

With a lap to go the gap was 0.828s, and Oliphant was catching the lapped Hyundai of Rick Parfitt Jr.

Parfitt delayed Oliphant at Surtees and McLaren, but then jumped out of the way in time for the Cheshire man to just hold off Shedden at the flag.

“I absolutely attacked the first few laps, and I just needed to manage it after that,” said Oliphant.

“I allowed Gordon to eat into the gap, because I wanted to have some tyres left if there was a safety car.”

Shedden added: “We just lost too much track position early on in the opening three or four laps, and I didn’t have time to get to him. That left me with too much to do.”

Rowbottom, who had been “too clever” trying to minimise wheelspin at the start, dropped to seventh on the opening lap. 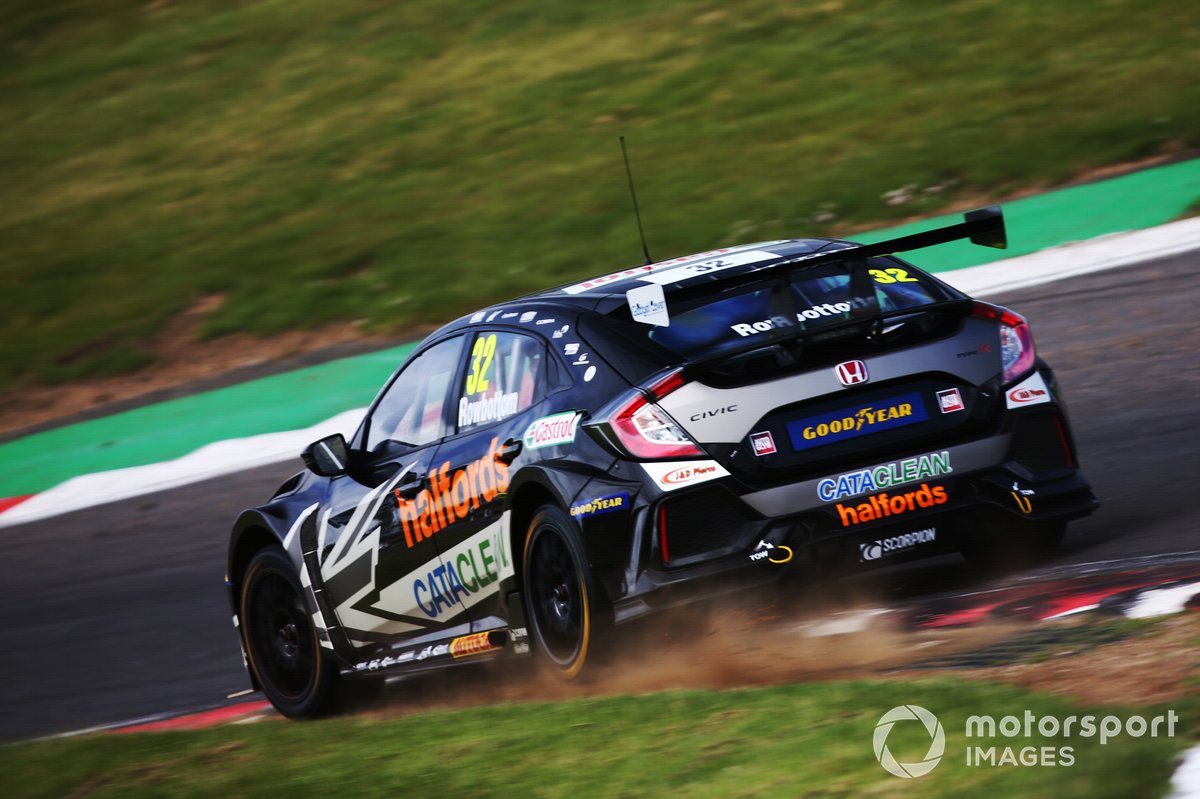 But the BTCC sophomore picked his way through the pack in methodical fashion, and got into third when he passed Moffat for third at Druids on lap 10.

The overtaking had taken too much from Rowbottom’s tyres, but he comfortably completed a Dynamics Honda 2-3 and left his heavily ballasted pursuers behind.

These were led by Jake Hill, who at mid-distance found a chink of light to Moffat’s inside into Clearways, and chiselled it wide enough for him to slip his Motorbase-run MB Motorsport Ford Focus ahead.

The consequence was that Moffat rapidly lost further places to Sutton, Ingram and Chris Smiley as he fell to eighth.

Hill, running 39kg of ballast, spent the rest of the race fending off championship leader Sutton, with the full 75kg of weight whack on his Infiniti, in a close race for fourth.

Ingram, with 66kg on his Excelr8 Motorsport Hyundai i30 N, fell away from this pair as the race wore on, but held on from team-mate Smiley and Moffat for sixth.

Stephen Jelley took ninth on the road, but a 5s penalty for a false start demoted his WSR BMW to 15th. Up to ninth therefore came Josh Cook, on 48kg of ballast in his BTC Racing Honda, and the top 10 was rounded out by Jack Goff’s Team Hard Cupra Leon.

Colin Turkington had a disastrous race in his WSR BMW, carrying 57kg of success weight.

The four-time champion was running 14th when contact with Sam Osborne’s Motorbase Ford at Clearways precipitated a spin, and he finished 21st.