Nearly 30 years ago a new British Touring Car era kicked at Silverstone, the setting for this weekend's sixth round of the 2020 season. KEVIN TURNER talked to some of the key figures for the 31 March 2011 issue of Autosport magazine

At Silverstone in April 1991, the British Touring Car Championship embarked upon a new era. Whereas now the NGTC cars are well established, nearly 30 years ago it was a different flood of two-litre machines that set the BTCC on a new path.

Two-litre cars were not new to the category - they had run alongside the Class A Group A cars (mainly Ford RS500s) in 1990 - but this was the first time they took centre stage.

The loss of the fire-breathing 550+bhp turbocharged RS500s that had dominated the front of the field was not popular, but four-time champion Andy Rouse (below, left), who helped formulate the new rules, says it had to happen.

"One of the reasons we changed was that we got good coverage with the BBC," he says. "While there were lots of RS500s it was a good show, but they were about to run out of homologation. It was a case of reinvent the BTCC to keep it going.

"I looked through all the cars that could be used and two-litres was the way to go, because most manufacturers had a [normally aspirated] two-litre car in their range. All of them now had the same chance of winning, so it all made sense."

There was another compelling reason to simplify the regulations and move away from the traditional multi-class structure. John Cleland, the 1989 champion in a Class C Vauxhall Astra who would go on to be a star of the new formula, remembers: "Very seldom had the championship been won by the driver who won the most races and spectators didn't understand it. 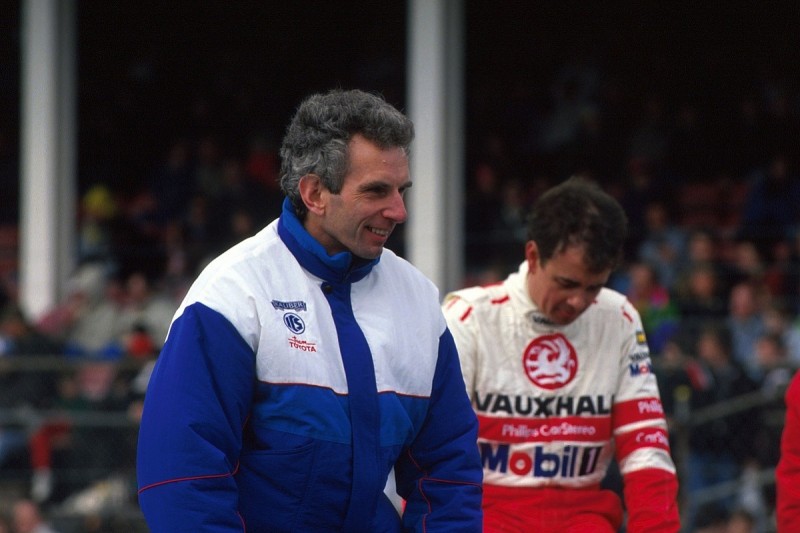 "In 1989 I never truly felt I'd won the BTCC. To go to a one-class structure meant the driver who won the most races won the championship, and that's absolutely right."

Nevertheless, the new cars took some getting used to. Tim Harvey, who made the switch from RS500 to BMW M3, wasn't initially impressed.

Podcast: Choosing the greatest touring car of all time

"It was disappointing," he recalls. "All racing drivers want the fastest, most spectacular cars. The M3s initially felt gutless, but what they lacked in power they made up for in handling and agility. You quickly worked out what you needed to do."

Thanks to experience of the M3 in Japan, the man who got on the pace quickest was Will Hoy (below, leading Rouse at Brands Hatch). He stepped into a Vic Lee-run BMW and took the first two victories of the new era, the first of which - the Silverstone opener - was the first BTCC race win for anything other than an RS500 since August 1987.

The relative strengths of the cars - the BMWs had better traction and were stronger on the brakes, while the FWD cars tended to be aerodynamically efficient and faster on the straights - meant the advantage swung back and forth

Works BMW driver Steve Soper, completing only a part-campaign thanks to DTM commitments, took round three at Donington Park before Vauxhall got off the mark at Thruxton with a 1-2 for Cleland and Jeff Alam.

Up to that point the front-wheel-drive Cavaliers had been quick, but tyre wear had hurt their race pace against the rear-wheel-drive M3s. As a tyre war raged between Dunlop and Yokohama the problem would return, but at Thruxton Vauxhall's Dunlops held together for Cleland to take the first of his 17 overall BTCC wins.

"I was still pretty much an unknown," he says. "I love Thruxton and to see the chequered flag for the first time was really important. It justified Vauxhall getting involved and continuing. 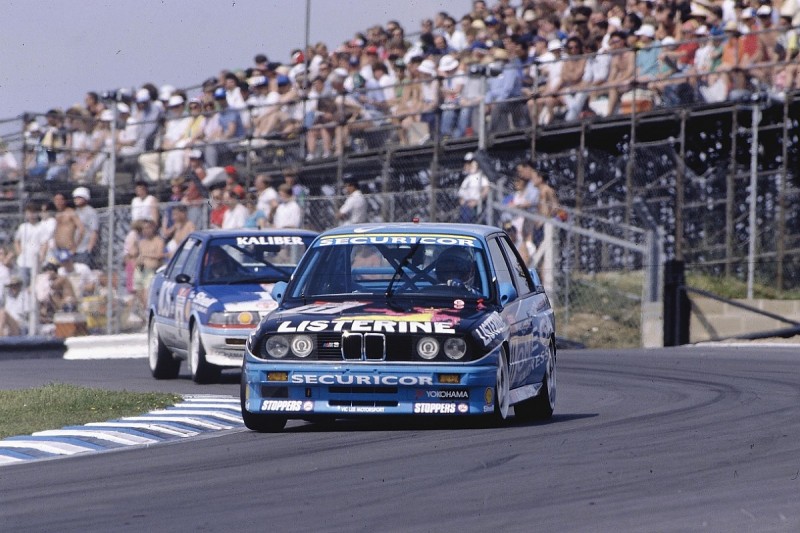 "The cars were very equal. The BMW was probably kinder to its tyres. Our Dunlops dropped off, whereas Will was on Yokohamas, which were renowned for staying together. It was a real battle that year and we were trying so many different tyre developments.

"Vauxhall had only run the Cavalier for a year, but the BMW had a racing pedigree. We were still learning."

Cleland won the next race at Silverstone, but only after crashing in a rainstorm. "I was leading, went straight on and hit the barrier [at Brooklands]," he recalls. "I was on the radio before I was out of the car saying it was too dangerous. I realised I had to get the race stopped, so I'd still win the race on countback!"

It worked. Almost. Ex-champion Frank Sytner, who started on rain tyres in his M3, took the lead when Cleland crashed and lost out on countback. But then organisers decreed the race would not count for points, so Cleland gained nothing.

Tim Sugden and Soper added to BMW's tally at Brands Hatch and Silverstone, with Hoy all the while picking up points, before another now-common element was introduced at Donington in July: the multi-race format.

Rouse won both legs to give Toyota its first BTCC wins. It meant three of the six marques represented had already taken victories, something that hadn't happened since 1987.

The relative strengths of the cars - the BMWs had better traction and were stronger on the brakes, while the FWD cars tended to be aerodynamically efficient and faster on the straights - meant the advantage swung back and forth depending on the circuits and conditions.

"It made it all quite interesting because you didn't get the same winner all the time and the racing was hard," says Rouse. 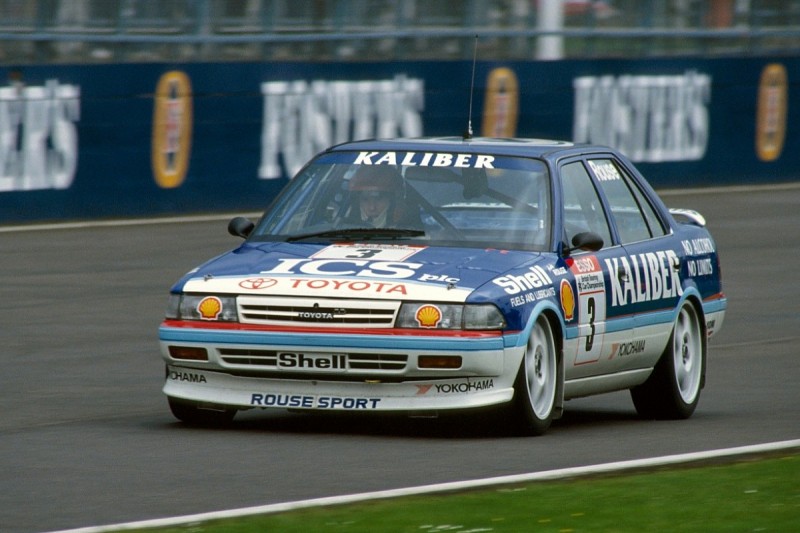 Cleland won Oulton Park's next round, but a stirring drive to second by a flu-ridden Hoy kept the BMW man in the fight. He and Rouse added victories at the Brands Hatch double-header so, despite a third points-paying win for Cleland at Donington, Hoy headed to the penultimate round at Thruxton with the chance of securing the crown a race early.

But a storming start by Cleland - a surprising feature of the season for an FWD car against RWD BMWs - got him the lead. "We worked really hard to get the right engine mapping to get off the line," he recalls. "I spent years developing starts and the tyres helped enormously."

"Will had a nice touch with the BMW - it was a perfect combination. He deserved to win it" John Cleland

Then Soper - ever the BMW man - forced Cleland wide at Campbell, allowing Hoy into the lead. Soper then overtook the title favourite and all looked set until Hoy clashed with Soper's team-mate, Jonathan Palmer. A rattled Hoy retired after more contact with Cleland.

PLUS: The touring car great who never won the BTCC

It all came good for Hoy at the Silverstone finale. While Harvey headed to his first two-litre victory, thus cementing a relationship with VLM that would lead to the 1992 crown, Hoy did enough with fifth.

Even though he was edged onto the grass by Hoy's team-mate Ray Bellm - not the last time he would fall foul of BMW aggression - Cleland concedes the right driver won.

"Will had a nice touch with the BMW - it was a perfect combination," he says. "He deserved to win it."

Hoy, Cleland and Harvey would soon be joined by stars such as Alain Menu, Joachim Winkelhock and Gabriele Tarquini as more and more manufacturers created a boom time for the BTCC during the 1990s. The new rules, which would soon spread around the world, had set the scene for arguably touring car racing's greatest era. 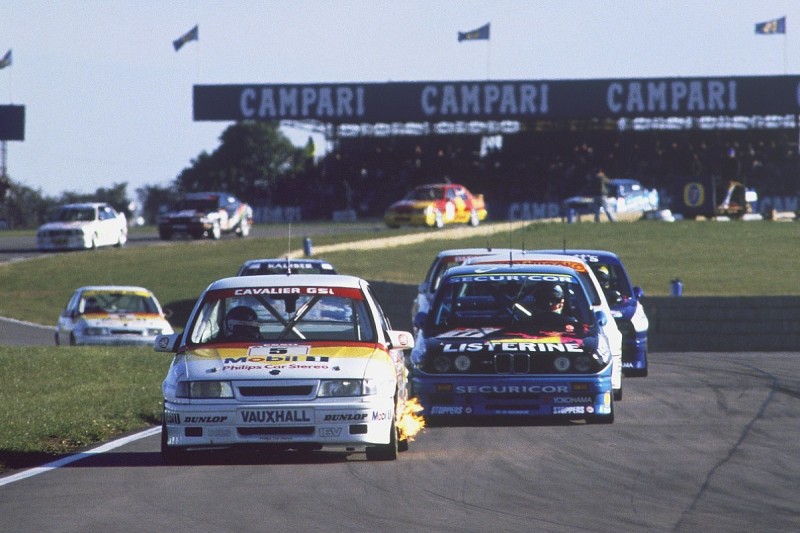