The WSR driver was taken to the Queen's Medical Centre in Derby after suffering a heavy impact to the driver's door of his BMW 330i M Sport in the first race at Donington Park.

He and Power Maxed Racing driver Rob Collard collided at the Old Hairpin and Jordan span across the track where he was collected by Adam Morgan and then Stephen Jelley.

Jordan briefly returned to the circuit for race three, where he told ITV4 that he has been suffering from chest pains.

"[I'm] very sore," he said. "Everything was alright at the hospital.

"I didn't really want to go but I was having some chest pains - they wanted to check that out. That was all OK but very sore."

The 2013 champion added that it was the largest crash of his career.

"It was definitely the biggest hit I've ever had.

"Credit to WSR and BMW, the car stood up and did its job. Nothing's broken.

"Yes, it's tweaked the cage but it would with an impact like that.

"[It's] frustrating, but it's what happens when you're racing the pack and get turned round like that. There's not a lot you can do.

"Then Collard made a mistake round the left of the Craners and ran wide. I then went past him on the left, [I] left well more than a car's width at the apex and got harpooned in the right rear." 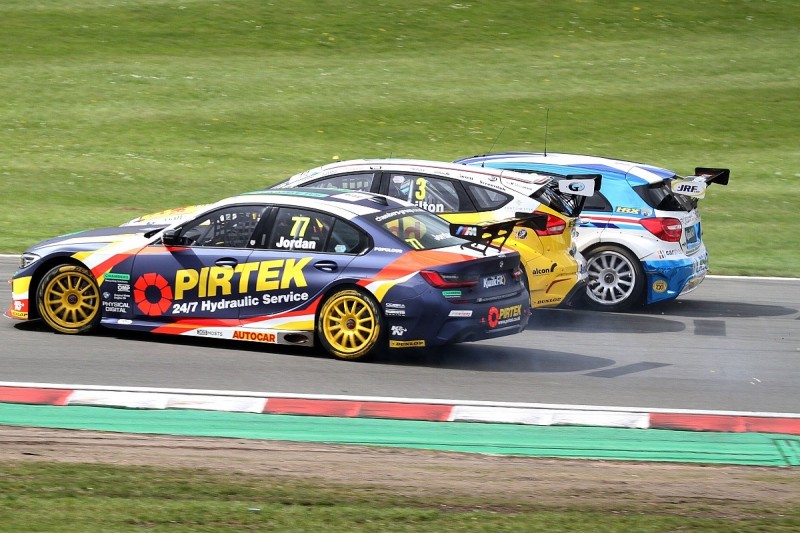 He also used the interview to call for TOCA to review the BTCC's driving standards.

"I find it quite funny because their written [guidelines] in black and white that we got was that you've got to be at the B-post for the car behind.

"I've got a rub just in front of my right-rear wheel. Last time I checked, that wasn't the B-post.

"When I go and do my historics at Goodwood, you don't have these racing incidents. We need to clamp down on that."

Collard earlier told Autosport he felt "really bad for Andrew" but added: "To me, I don't feel did anything wrong".

He argued that Jordan "tried to over squeeze me to slow me down or he hasn't considered that I'm there and he's just turned in front of me, which caused the impact.

"I'm on the track just doing my normal thing and he's just come across the front."