Ollie Jackson fended off Adam Morgan to take his second reversed-grid British Touring Car Championship win in the finale at Snetterton, as chaos reigned behind the leading duo.

While Jackson found Morgan trying to prise a way past on the final lap, a controversial crash at the final corner between title contenders Tom Ingram and Rory Butcher as they fought for third enabled new championship leader Colin Turkington to grab the final podium position.

Jackson's Motorbase Performance Ford Focus started from third on the grid, and he moved up to second when the polesitting Excelr8 Motorsport Hyundai i30 of Chris Smiley made a poor getaway.

The feisty Jackson then drove around the outside of the Ciceley Motorsport Mercedes A-Class of Morgan at the Agostini and Hamilton left-handers, with minor contact as they fought, to claim the inside line and the lead at the tight Oggies right-hander.

While Morgan put Jackson under pressure, Butcher demoted Smiley from third on lap three and moved in on the leading duo, so Morgan found himself surrounded by Motorbase Fords.

Morgan found the Mercedes a bit hairy through the fast Riches right-hander, preventing him from setting up Jackson into the Wilson hairpin, and in turn had to keep his eye on Butcher behind.

A fourth car - the Speedworks Motorsport-run Toyota Corolla of Ingram - joined the leading quartet in the last couple of laps. 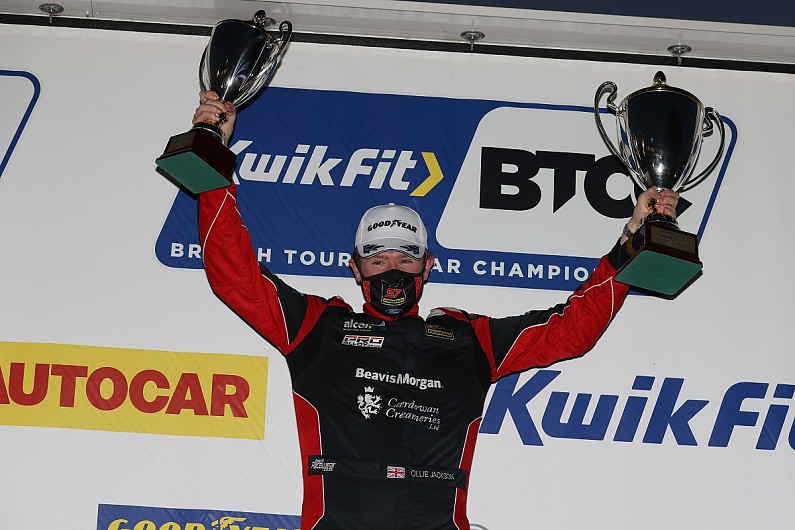 Ingram had vaulted from seventh to fourth on lap five when Smiley and an angry Ash Sutton clashed, with Jake Hill also getting caught up in the incident.

Once free of that aggression, Ingram set fastest lap and tore into the leading trio. Then, as Butcher ran a little wide into Coram on the final lap, he inserted the Toyota inside.

There was contact further round the corner, with Butcher's Ford snapping onto the grass, from where it shot back onto the circuit at the tight Murrays left-hander and harpooned Ingram off the road.

Turkington had also picked his way through the warfare, and was surprised to inherit third at the flag in his West Surrey Racing-run BMW 330i M Sport, while Sutton - his Laser Tools Racing Infiniti Q50 battered by repeated assaults - also got past to claim fourth.

Up front, Jackson held on by 0.217 seconds to defeat Morgan.

"Fantastic - the first win was really emotional, this one just felt brilliant," he said.

Butcher managed to get across the line in fifth ahead of the Honda Civic Type Rs of Dan Cammish (Team Dynamics) and Josh Cook (BTC Racing).

This trio had endured their own war on the opening lap, when contact from Butcher pushed Cook into Cammish as they entered the back straight, and Cook looked not long for this race until his left-front disintegrated sufficiently for bodywork to no longer be rubbing on tyre.

The smoky, assaulted Toyota of Ingram got across the line in eighth ahead of Hill's MB Motorsport Honda, while Aiden Moffat charged from the back of the grid to complete the top 10 in his LTR Infiniti, after problems with a sticking throttle in the first two races.

Turkington leads Sutton by nine points going into the Brands Hatch finale, with Cammish (25 behind), Ingram (34 adrift) and Butcher (63) also in with a mathematical chance of the title.