The BTC Racing Honda of Josh Cook led the way in free practice for the third round of the British Touring Car Championship at Oulton Park.

Cook's Civic Type R is running without success ballast as he is down in 13th in the championship following a disastrous second round at Brands Hatch, where he was scuppered by incidents and the Honda power-steering plague.

As the chequered flag fell to end the second of the two free practice sessions at Oulton Park, Cook strung together a storming lap to knock the identical Civic of Team Dynamics-run works driver Dan Cammish off his perch at the top of the times by 0.140 seconds.

Cammish, who also suffered power-steering problems as well as an engine failure at Brands Hatch, has dropped to fifth in the points and arrived at Oulton Park carrying 36kg of success ballast, and in turn only moved to the top of the order with just over a minute remaining.

The man Cammish deposed was Rory Butcher, who after his race-win-costing puncture heartbreaks at Brands Hatch is sixth in the standings, and carrying 30kg of ballast on his Motorbase Performance Ford Focus ST.

Butcher absolutely blitzed the early going in the second free practice session - the only dry period of running - and was over three tenths of a second to the good when the red flags appeared after Ash Sutton went straight on at Lodge Corner in his Laser Tools Racing Infiniti.

Butcher didn't improve once the session resumed, but a raft of late quick efforts completely reshuffled the order of the top 10 around him.

Up to fourth came the impressive Excelr8 Motorsport Hyundai of Chris Smiley, running ballast-free this weekend, while fifth was a superb joint BTCC comeback for Mike Bushell and the Power Maxed Racing Vauxhall Astra. 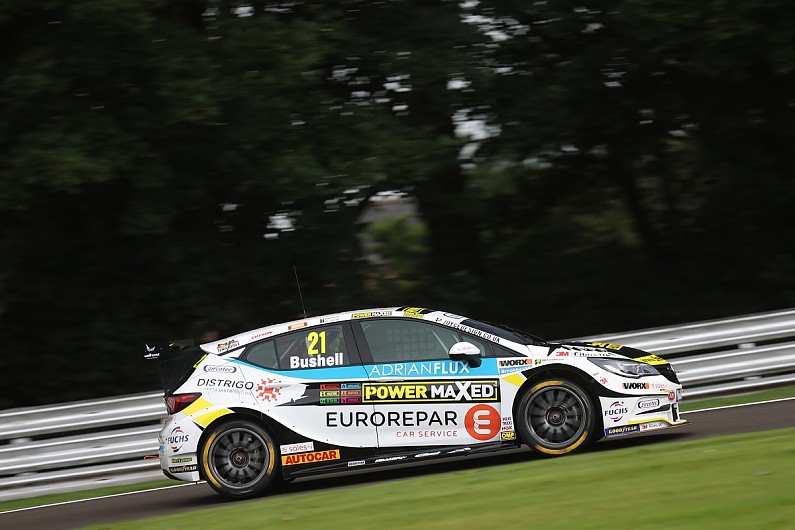 Bushell is only in the car for this weekend and the following round at Knockhill, and he also went fastest by 1.7s in the opening session - that was a wet/dry period, and Bushell had the right strategy of going onto slicks early and having them up to temperature when the quicker times were set at the end.

Reigning champion Colin Turkington will be trying to do what he shocked everyone by doing in 2019 - getting a 60kg-ballasted, West Surrey Racing-run BMW 330i M Sport on to pole at Oulton Park - and made a respectable start in that quest by going sixth fastest.

Adam Morgan was seventh in his Ciceley Motorsport Mercedes A-Class, with Tom Ingram eighth in the Toyota Corolla run by Speedworks Motorsport and Tom Oliphant ninth in the second of the WSR BMWs.

Tenth was three-time champion Matt Neal, who is carrying the #700 on his Dynamics-run Honda this weekend in honour of what will be his 700th BTCC start in Sunday's second race.

With the damage to his Infiniti limited to a heavy consumption of gravel, Sutton returned to the track but could do no better than 19th fastest.