The rear-wheel-drive West Surrey Racing-run BMW 330i M Sport of Turkington predictably outdragged the polesitting Team Dynamics-fielded Honda Civic Type R of Dan Cammish away from the line, before Cammish's revs dropped and he fell to fourth.

Up to second came Ollie Jackson, but the Motorbase Performance Ford Focus ST was passed in audacious fashion by Ingram's Speedworks Motorsport-tended Toyota Corolla into Sheene Curve on the opening lap.

Jackson then ran wide at Sheene on lap three, allowing Cammish an easy pass up to third, before the safety car emerged.

A barging match over 12th between Michael Crees (BTC Racing Honda) and Bobby Thompson (Trade Price Cars Audi) on the short straight between Hawthorns and Westfield ended with the two cars plunging into the gravel, and there was a lengthy delay while diggers trundled into action to remove them.

Ten laps of racing remained, and they turned into something of a war of attrition.

Turkington, Ingram and Cammish formed the leading group, but on the 16th lap of 18 Cammish ran off the road at Surtees, with early reports suggesting power-steering failure. 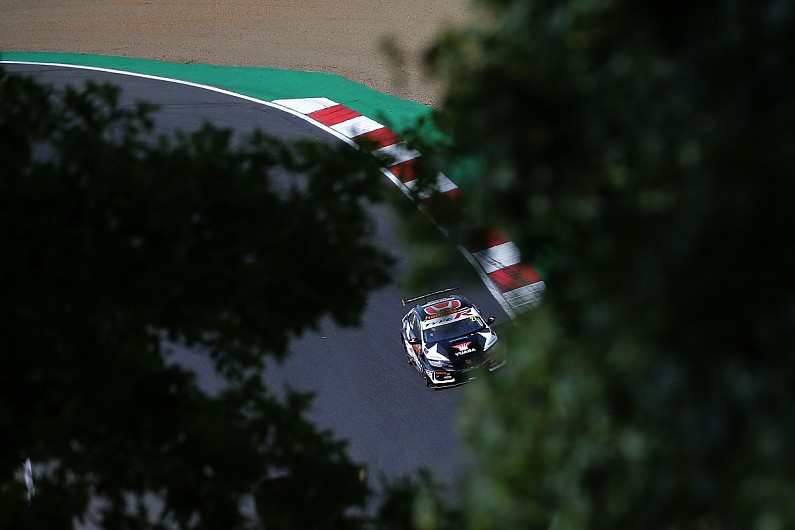 While Cammish resumed at the tail of the field, Ingram fell away to finish 3.222 seconds adrift of race winner Turkington.

Ash Sutton continued his progress from his poor qualifying session, racing the Laser Tools Racing Infiniti Q50 from sixth on the grid to third, thanks to an aggressive move on Jackson into Clearways.

Jackson was also demoted by his extraordinary team-mate Rory Butcher.

Following his first-race puncture while leading, Butcher started his Focus from 25th on the grid, but was up to 12th by the time the safety car emerged on lap three, and finished fourth.

Tom Chilton was running fourth, after passing Jackson, when his BTC Racing Honda was struck by power-steering problems, forcing him out of the race.

Jake Hill was sixth in the older-spec MB Motorsport Honda when he pulled off onto the grass and retired on the straight after Surtees.

Remarkably, for the second successive event, race-two winner Turkington has drawn the number '12' for the reversed grid, meaning Aiden Moffat will start on pole in his Infiniti, with Jack Goff's Team Hard Volkswagen alongside.