Turkington dominated the earlier free practice sessions in his West Surrey Racing-run BMW 330i M Sport, but found things a lot hotter in qualifying, and was embroiled in a three-way battle for pole as times tumbled shortly after the halfway point.

In a session affected by intermittent light rain, Turkington stamped in a 1m09.134s, only to find that pipped by the Laser Tools Racing Infiniti Q50 of Ash Sutton, who lapped in 1m09.095s.

Moments later, Turkington grabbed the top spot back with 1m08.998s, a new qualifying lap record for BTCC cars at Donington.

A red flag two-thirds of the way through the session, to enable some hefty marshals to shift the chicane tyre stack back into place, preceded a further 10 minutes of running, during which there were no significant improvements.

"The first qualifying of the year is always a bit of a step into the unknown," Turkington told Autosport.

"I got something of a banker in there on my first run, but I knew if the conditions held up there was the potential for a bit more.

"I got a clean space on my own, and managed to hook it all together.

"The track conditions were a bit difficult because there were spots on the windscreen, and you have to manage how hard you're pushing." 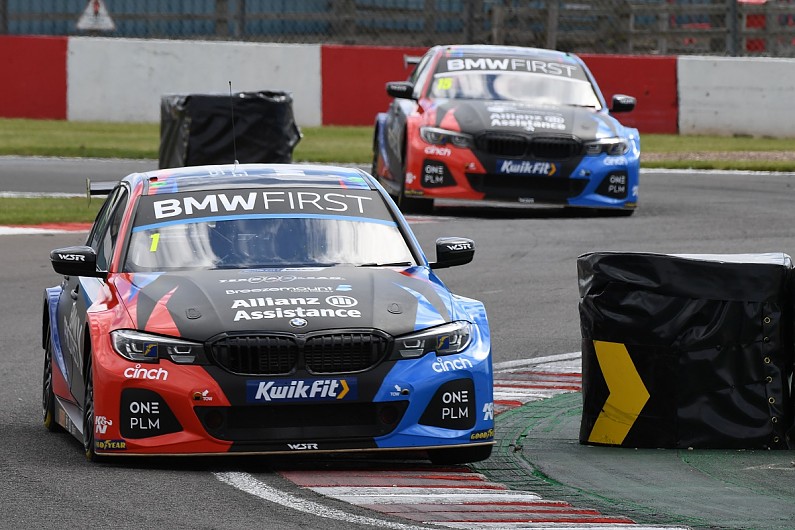 Dan Cammish in the lead Team Dynamics-run Honda Civic Type R managed to insert himself between Turkington and Sutton, with his lap falling just 0.087s short for a front-row starting position.

"Dynamics proved again why they're so well-regarded," said Cammish.

"We had a differential problem, which we found 15 minutes before the start, and they changed it in 16 minutes.

"This one's for them - I was totally on the limit."

Tom Ingram sat at the top of the times on the early runs with his Speedworks Motorsport-run Toyota Corolla, but didn't manage to improve and eventually qualified fourth.

Fifth was Tom Oliphant, who equalled his best BTCC qualifying performance in his WSR BMW, and shares the third row with Rory Butcher.

The Scot briefly held pole in his Motorbase Performance Ford Focus, but then an off on the Craner Curves provided a hairy moment before he rejoined after the Old Hairpin.

Jake Hill's MB Motorsport Honda Civic and the BTC Racing Honda of Jake Cook will share the fourth row, while the top 10 was completed by another Honda - Matt Neal's Dynamics machine - and the Ciceley Mercedes of Adam Morgan.

Jack Goff managed to get out on a track for a couple of laps in his Team Hard Volkswagen, damaged in free practice after a puncture caused him to crash at McLeans.

But there was drama for Goff's team-mate Nicolas Hamilton, whose bonnet flew up on the back straight. He did not rejoin after going to the pits.