© 2020 Autosport.  All rights reserved.
Previous / Plato out of 2020 BTCC season with Vauxhall
Next / Plato: Economic fears key to BTCC sabbatical in 2020

The Scotsman, who has switched to the Kent squad for this season to drive the new-shape Focus, topped the morning session of the opening day on Tuesday, and then rain meant it was impossible to improve during the afternoon or Wednesday.

Butcher did a short run at the end of the first morning, completing two laps quicker than anyone else's best and finishing 0.757 seconds clear of the BTC Racing Honda Civic of Tom Chilton.

PLUS: The new car that could shake up the BTCC pecking order

Butcher had earlier caused a red flag when an electrical failure caused the Ford to coast to a halt as it exited the pitlane, but managed to get in some quick running after that.

"The car has been really good straight out of the box," he said.

"Since the electrical issue it has gone really smoothly and we've worked our way through our plan.

"We're definitely in a good place with the car. We decided to do a proper run at the end and see where we are - it turned out to be a good lap and the car was mega."

Tom Ingram topped the times for much of the morning before dropping to third in the Speedworks Motorsport-run Toyota Corolla, with Jake Hill (MB Motorsport Honda), Dan Cammish (Team Dynamics Honda) and Stephen Jelley (Team Parker Racing BMW) next.

The Tuesday afternoon times were skewed by some runners being out when the track was not so wet, but Wednesday offered a more representative day of running on grooved tyres.

Ash Sutton headed both sessions in his Laser Tools Racing Infiniti, with his morning time enough to see off Ingram by 0.845s. 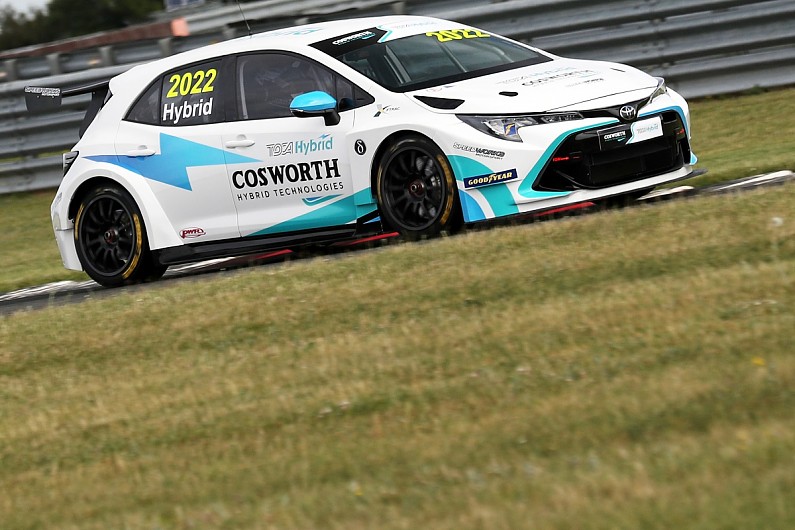 Butcher was third on the day, while Michael Crees (BTC Honda) leapt up to fourth on a late run to head Aidan Moffat in the other Infiniti and reigning champion Colin Turkington's West Surrey Racing-run BMW.

The official BMWs of Turkington and Tom Oliphant didn't set representative times in the dry session.

The BTCC Cosworth hybrid development car also ran through both days of the test, with Darren Turner at the wheel of the Speedworks-run Toyota.

The test mainly involved checking systems and consisted primarily of in and outlaps, and the car was not officially timed.

Plans for the hybrid to stay on for a third day at Snetterton with Andrew Jordan driving have been cancelled due to the likelihood of the gloomy weather continuing and the prospect of approximately 60 Mini Challenge cars being on the track at the same time.

As usual, there were some new faces at the test. W Series and Carrera Cup GB racer Esmee Hawkey took over Hill's MB Honda for Wednesday, lapping 23rd of the 27 runners, while reigning Touring Car Trophy champion Henry Neal drove his father Matt's Dynamics Honda on Wednesday afternoon before handing it back to the three-time champion.