WSR driver Jordan claimed his first pole since Thruxton 2014 but caused the last of five red flags in a heavily interrupted session, which ended proceedings prematurely.

Practice pacesetter Dan Cammish threw down the early gauntlet in his Honda Civic Type R before the BMWs of reigning champion Colin Turkington and Jordan responded to go top.

But then the first red flag was waved only seven minutes into the session when a bale was clipped at the Jim Clark Esses and knocked onto the circuit.

After a brief delay the session resumed but another stoppage came just four minutes later, which meant the drivers did not have a chance to improve and only 15 runners had set a banker lap.

The second incident was caused by Nicolas Hamilton who, on cold tyres, ran wide at the exit of the chicane and smashed his Ford Focus RS into the tyre stack, which forced the Motorbase driver to halt his car on the run to Tower.

When the session restarted again, there was only a further two minutes of incident free running before Tom Ingram clipped another bale at the Esses to drag it onto the circuit.

Team Hard driver Bobby Thompson then rounded the corner unsighted and hit it head on in his Volkswagen CC.

Four further minutes of running again did not allow a big enough window for drivers to heat their tyres and improve before there was a fourth red flag incident.

Butcher had fallen foul of the interrupted session and was yet to post a flying lap. He had set a very competitive first sector but lost the rest of his lap to the Thompson shunt.

Butcher ran wide on the exit of Clervaux and kicked up dust, which, combined with his cold right-rear tyre, meant he suffered a massive spin on the exit of the chicane and he buried his AMD Tuning car into the barriers. 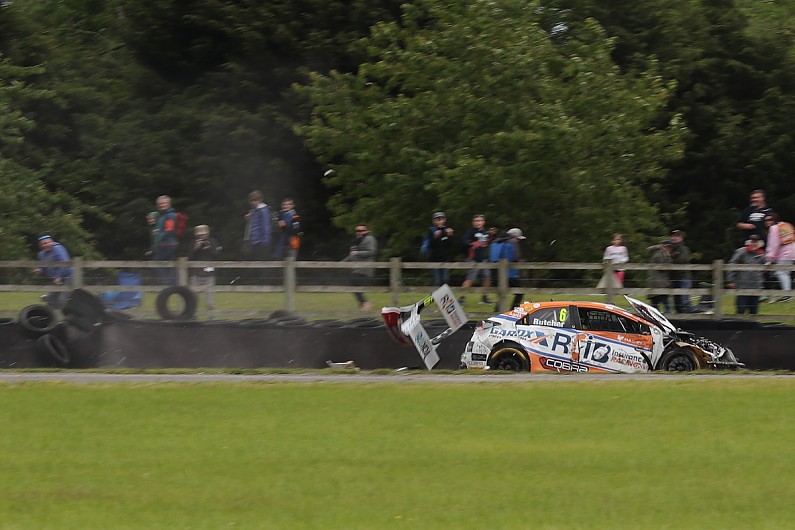 This stoppage was far longer as the tyre wall required repairs, and light rain arrived over the circuit during this time so it looked as if Jordan was on course for pole.

But when the session resumed for a final shootout he improved his time in a mad dash during what should have been the final 13 minutes.

However, Jordan suffered a puncture on a quick lap and so lost his car on the run into the complex and span across the track, causing the fifth red flag.

As the rain was increasing at this point, the chequered flag was waved with lap time improvements looking unlikely.

Jordan had his fastest lap wiped for causing a red flag, but his second effort of 1min21.734sec was still enough for pole.

Chris Smiley ended 0.148s off in second, ahead of Tom Chilton and Turkington. Tom Oliphant rounded out the top five in his BMW 330i M Sport, with Ash Sutton and Cammish and sixth and seventh.