Hondas dominated the opening free practice sessions at Snetterton ahead of the British Touring Car Championship this weekend with Eurotech Racing runner Jack Goff at the head of the timesheets.

Goff, who is seventh in the championship points, improved from 13th in practice one to top the second session with a 1m55.684s lap, which was more than two tenths clear of the rest of the pack.

"We tried a few things in free practice one, but we went back to what we knew in practice two and I think we got all we could from the car - there's not much left," said Goff.

"I went out on new tyres at the end of the session but I ran wide at a corner so decided to abort the lap - there is no point risking anything as it is only practice, but I think we are in a very good place ahead of qualifying."

The factory Honda Civic Type-R of Dan Cammish was second in the timesheets with a strong lap towards the end of the session.

"I think we will have great pace for qualifying," said Cammish. "We went out on some scrubbed new tyres and the car reacted well - I was nailed on some corners almost to the point where it was at the limit of the driver rather than the car. It felt great, and there will be more to come later this afternoon."

Goff's team-mate Matt Simpson, a winner at Oulton Park earlier this season, was third in the times after topping the earlier session.

"We have been out of the car for six weeks [since the last rounds at Croft in June] and I wanted to play myself back in," said Simpson. "We put the same set-up we had at Oulton Park on the car, and I was comfortable straight away.

"We didn't run with new brakes or new tyres, so I feel I can dip well inside the 1m55s lap times when it comes to qualifying."

Team Hard VW CC driver Mike Bushell set the fourth fastest time overall to underscore his impressive third fastest in the morning, and he was followed by another Eurotech Honda, that of Brett Smith, in fifth position.

The top six was completed by the HMS Motorsport Alfa Romeo Giulietta of Rob Austin, while championship leader Colin Turkington was 10th overall with 75kg of success ballast on his WSR BMW 125i M Sport.

In session one, the two Power Maxed Racing Vauxhall Astra drivers Josh Cook and Senna Proctor collided on the out-lap. Cook was trying to keep out of the way of another car and locked up in the slippery conditions, cannoning into the back of Proctor's sister machine. Cook was forced to miss the session due to the damage, while Proctor continued after repairs. 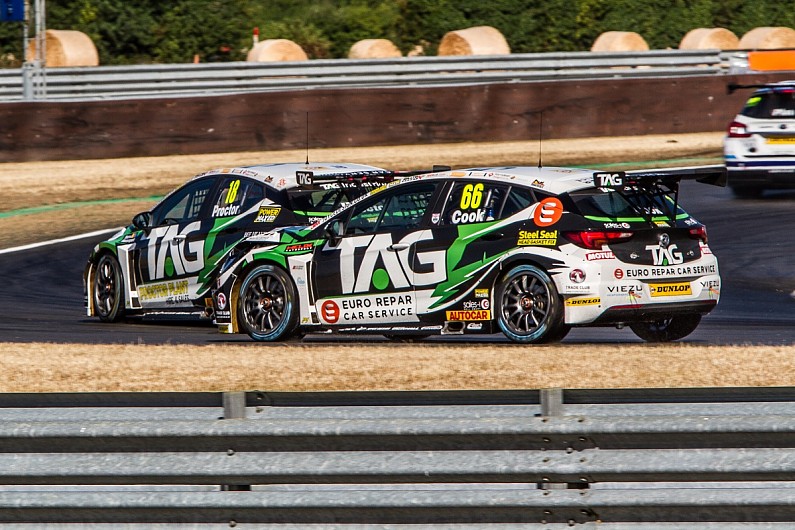 Tom Ingram, who is second in the points coming into the meeting, suffered an electrical failure on the engine wiring loom during the opening session and was only able to complete five laps in his Speedworks Motorsport Toyota Avensis. He was 15th in session two.

Both Tom Oliphant in his Ciceley Motorsport Mercedes-Benz A-Class and Smith were given black flags in second practice for track limits infringements.

The drivers will take part in two qualifying sessions this afternoon. The first is a 30-minute session which will set the grid for the opening race of the weekend and takes place at 1510hrs.

Race three is the special celebration race, which will offer double points. It will feature a standalone 15-minute qualifying session where no driver will be required to carry championship success ballast. It is scheduled to begin at 1740hrs.