Vernay got a good enough getaway from pole position in his RS3 LMS to close the door on the Volkswagen Golf GTi of fellow front row starter Rob Huff and edged away thereafter to claim his second win of the season.

Vernay momentarily crept forward from his start slot before the lights went out but came to a prompt stop, then moved over to the right-hand side of the track when the race started to prevent Huff from running up his inside and into the lead.

That startline movement was investigated by officials as Vernay gradually increased his lead at the front, before a decision of no further action was communicated midway through the race.

Vernay said he he had been "worried" about the three cars behind, which all started with new front tyres, but the Frenchman maintained a comfortable buffer back to Huff throughout and clinched victory by 1.2 seconds, with Vervisch a comfortable third.

The second WRT Audi of Gordon Shedden spent the majority of the race pent up behind the Munnich Motorsport Honda Civic of Esteban Guerrieri, having been jumped by the Argentinian at the start.

From fifth on the grid, Guerrieri shaped to the outside off the line and almost found a way past Vervisch before ceding third on the run to the Hugenholtz left-handed hairpin, slotting back in between the two Audis.

Shedden had two half chances to engineer a way past the Civic but had to settle for fifth. 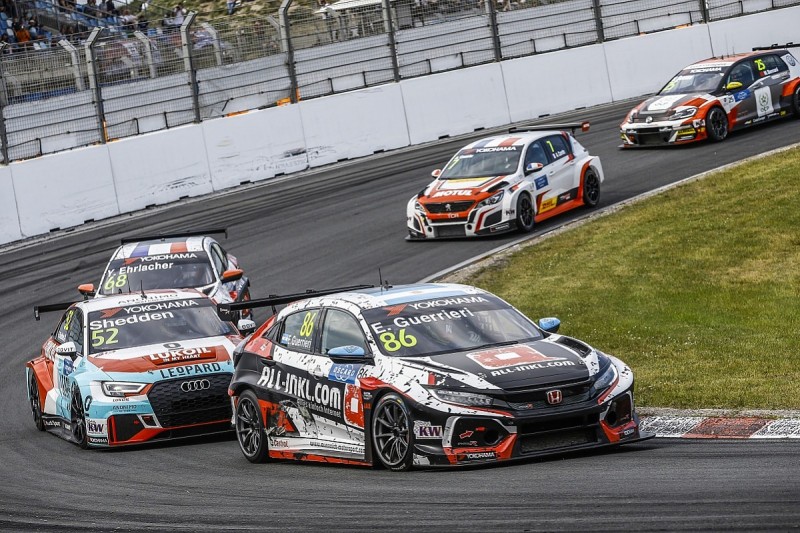 Guerrieri's team-mate Yann Ehrlacher could not match the two podiums he achieved in either of the weekend's first two races, but with sixth in the final encounter he did move into the lead of the championship.

Ehrlacher had an uneventful race in his Civic, sitting a comfortable margin back from Shedden's Audi, but the 10 points he claimed were enough to move him to the head of the drivers' standings by nine points from uncle Yvan Muller.

James Thompson completed a late pass on Pepe Oriola to claim ninth ahead of the Spaniard.

Gianni Morbidelli had advanced from 17th on the grid to run 13th and within striking distance of his and the Team Mulsanne Alfa Romeo outfit's first points of the WTCR season, but contact from John Filippi two laps from the finish as Morbidelli overtook the Cupra driver for 12th turned the Italian round.

Thed Bjork was the leading Hyundai driver in 14th, which meant all four i30 Ns failed to score a point during the Zandvoort weekend.