Having achieved a maiden WTCR podium for himself and the 308TCR on Sunday by leaping from seventh to second at the start, Comte set up victory in Monday's first race with another fast getaway from the front row to beat polesitter James Thompson down to the first corner.

Despite Thompson getting close to the leader after a mid-race safety car, Comte was not headed at the front of the field and cruised to victory by 4.757 seconds while Thompson and team-mate Ehrlacher swapped positions on the final lap.

Comte became the eighth driver to win from the first 14 WTCR races of the season, with the DG Sport driver's victory also making Peugeot the fifth of the seven brands competing in the world cup to win a race.

Runner-up Ehrlacher started the race from fifth in his Honda Civic, but beat Mehdi Bennani on the opening lap to run fourth.

Ehrlacher then spent the majority of the race bottled up behind the Campos Racing Cupra of Pepe Oriola until he pushed his way past with a little more than two laps remaining - with Oriola squirming wide at the slow Vodafone left-hander after a bump from the Civic. 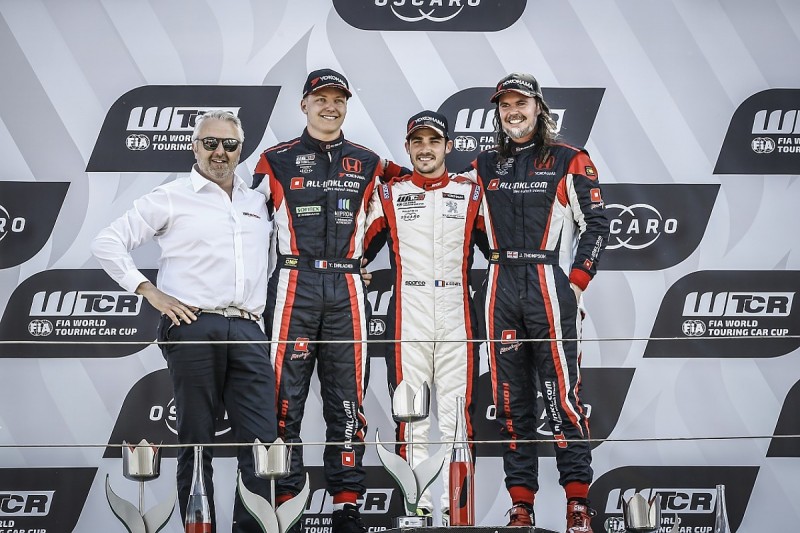 Thompson then slowed two corners from the finish to allow his team-mate into second place, which moves Ehrlacher within a point of his uncle - four-time World Touring Car champion Yvan Muller - at the head of the drivers' standings.

Behind Thompson, who secured his first podium since his return, came Oriola, who was able to hold off a growing queue of cars on the final lap after Ehrlacher had muscled his way through.

Bennani came home fifth in his Sebastien Loeb Racing Volkswagen Golf GTi ahead of Gordon Shedden, who enjoyed a tussle with the third Munnich Civic of Esteban Guerrieri.

Shedden left the door open for Guerrieri to take sixth while the Briton attempted to find a way past Bennani, but Shedden reclaimed the position on the penultimate lap in his WRT Audi RS3 LMS after setting up a move up the inside of the fast Scheivlak right-hander.

Race three polesitter Jean-Karl Vernay elected to start from the pitlane in his WRT Audi after an engine change, and completed four laps before returning to his garage.