Team Mulsanne Alfa Romeo racer Ceccon ended up just over a tenth behind the DG Sport Peugeot of Comte in Friday morning's first qualifying, which determines the grid for Saturday's opening race.

The Italian, who replaced Gianni Morbidelli in Team Mulsanne's line-up midway through the season, then proceeded to dominate the final portion of second qualifying, beating the BRC Racing Hyundai of Gabriele Tarquini by 0.699 seconds to take pole for Sunday's third race.

Second for Tarquini means he stretches his points lead further over fellow Hyundai drivers Thed Bjork and Yvan Muller, who both failed to make the top 10 in second qualifying. 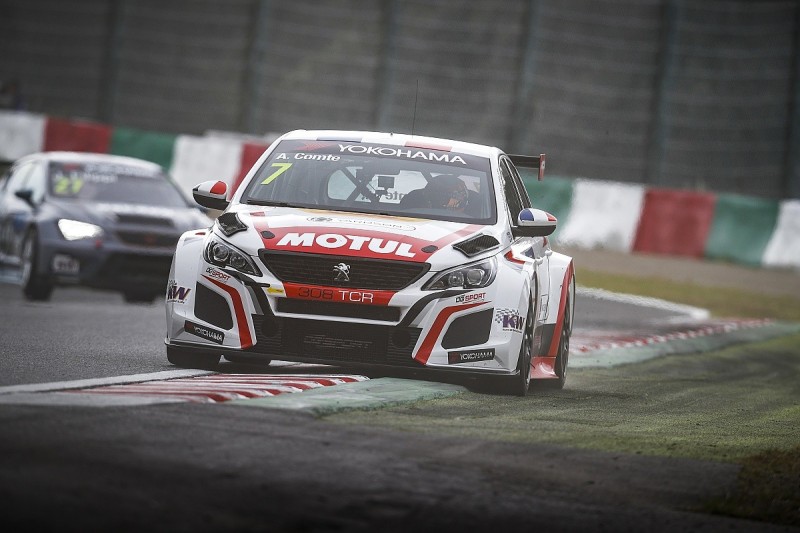 Title outsider Pepe Oriola will start the reversed-grid race from pole position in his Campos Racing Cupra by virtue of ending up 10th in the second part of second qualifying.

The Spaniard's time wasidentical to Esteban Guerrieri's (Munnich Honda), but because he set his first he kept the position, with Guerrieri ending up 11th both in the session and on the grid for races two and three.

Muller (YMR Hyundai) completed the order and will start 12th, having had his lap time scrubbed for exceeding track limits.

Oriola will line up ahead of Bennani's SLR team-mate Rob Huff in race two, with Denis Dupont (Comtoyou Audi), the second BRC Hyundai of Norbert Michelisz and Aurelien Panis following behind.

Guerrieri could at least take some comfort in taking third in first qualifying behind Comte and Ceccon, followed by Ehrlacher, Tarquini and Muller.

Title contender Bjork endured a difficult day in his YMR Hyundai, managing only 17th in first qualifying and then falling at the first hurdle in second qualifying as he finished the session 13th - where he will start both Sunday races.

Tiago Monteiro, returning from injury after more than a year on the sidelines, secured 20th on the grid for Saturday's opener in his Boutsen Ginion Honda and 16th for the two Sunday races.