Tarquini set the fastest time of the weekend so far in the shootout section of qualifying, recording a 1m24.316s lap of the Moulay El Hassan circuit in Marrakech in his Hyundai i30 N to beat the similar YMR car of Yvan Muller to pole.

BRC Racing driver Tarquini had trailed Muller through the first two sectors on his shootout effort, but pulled out the fastest final sector time and jumped the Frenchman by 0.080 seconds.

A slight mistake from Tarquini's team-mate Norbert Michelisz in the first sector of his flying lap cost him two tenths to Muller's previous best time time and, though he clawed back ground in the middle sector, he ended up 0.224s away from pole and will line-up third.

Thed Bjork had been fastest in the second part of qualifying in his YMR Hyundai, but was always playing catch up on his run and ended up 0.337s adrift.

Munnich Motorsport Honda Civic driver Yann Ehrlacher was the only non-Hyundai to make it through to the final part of qualifying, and will start Sunday's final race from fifth.

Fastest of those knocked out in Q2 was Rob Huff in his Sebastien Loeb Racing Golf GTi, with Ehrlacher's final effort in second qualifying beating the Briton's best by a mere 0.005s. 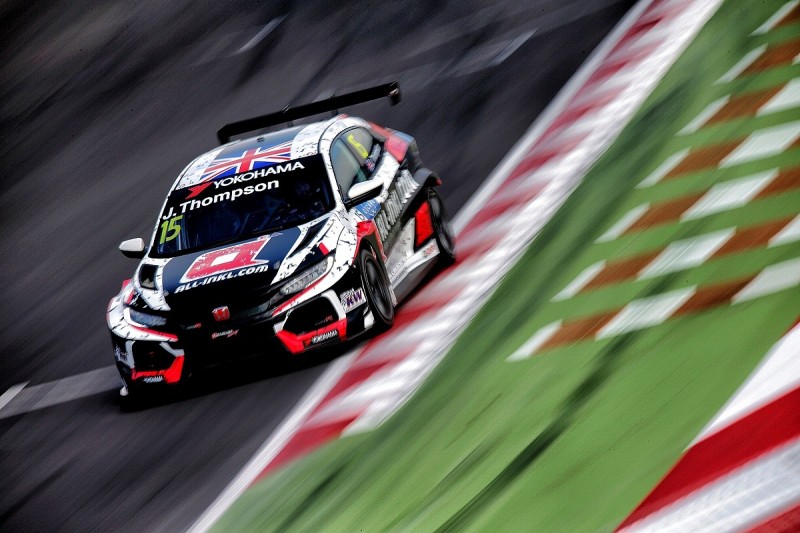 The second Golf of Mehdi Bennani was seventh ahead of James Thompson (pictured above), who was an impressive eighth in his Munnich Motorsport Honda and will start Sunday's reversed-grid race from third.

He will line up behind the WRT Audi RS3 LMS of Jean-Karl Vernay and polesitter Pepe Oriola on the race two grid, after the pair qualified ninth and 10th respectively.

Gordon Shedden briefly sat in 10th after his final flying lap in the session, but was bumped down by an improvement from the Cupra of Oriola.

Shedden had earlier squeaked through to the second part of qualifying in 12th at the expense of Esteban Guerrieri, who was the only one of the Munnich Motorsport drivers to miss the cut.

The pair were both sat in the drop zone when Q1 resumed following a lengthy stoppage to recover Denis Dupont's Comtoyou Audi from the barriers at Turn 1, but Shedden ultimately got the nod by 0.022s over Guerrieri.

Argentinian Guerrieri will start race two from 12th, though, with Frederic Vervisch dropping five spots from his 12th place qualifying position for his part in an accident at the start of Saturday's first race.

Neither of the Peugeots made it through the first part of qualifying, with Mato Homola 16th after sliding into the barrier on the outside of the Turn 4/5 chicane during the session and Aurelien Comte two places further behind.

Alfa Romeo pair Fabrizio Giovanardi and Gianni Morbidelli struggled once again and will start both of Sunday's races from 23rd and 25th respectively.