Tarquini jumped into the lead from second on the grid at the start of the race and expertly handled two safety car restarts to build an advantage that allowed him to defend his lead thereafter.

Tarquini made a better getaway off the line and was able to duck underneath polesitter Bjork on the approach to the first corner as the field bunched together in their wake.

Mehdi Bennani got into Esteban Guerrieri at the start, before Frederic Vervisch triggered an incident at the first corner when he braked late and went into the back of James Thompson's Honda Civic.

That contact put Thompson into a slide, before he was hit by the Audi again and half-spun, while Vervisch then also caught the Boutsen Ginion Civic of Tom Coronel as the Dutchman rejoined the circuit having run wide at the first corner.

Vervisch subsequently stopped his Comtoyou Audi on track, forcing the safety car to be deployed before a red flag was shown.

Tarquini leapt away on the full restart after a further lap behind the safety car, building a 1.338-second lead over Bjork.

But the race was quickly neutralised again when Tarquini's team-mate Norbert Michelisz - who had qualified second but dropped to the back of the grid after an engine change - stopped on track when a wheel fell off his Hyundai.

A further five laps behind the safety car followed before the race resumed.

Although Bjork once again allowed Tarquini to escape up the road by more than a second, the pair - with Huff for company in third - bunched up over the following lap.

The leading Hyundai cars slowly edged away from Huff and entered into a private battle for the lead, but Bjork struggled to get close enough to Tarquini to have a look at passing. 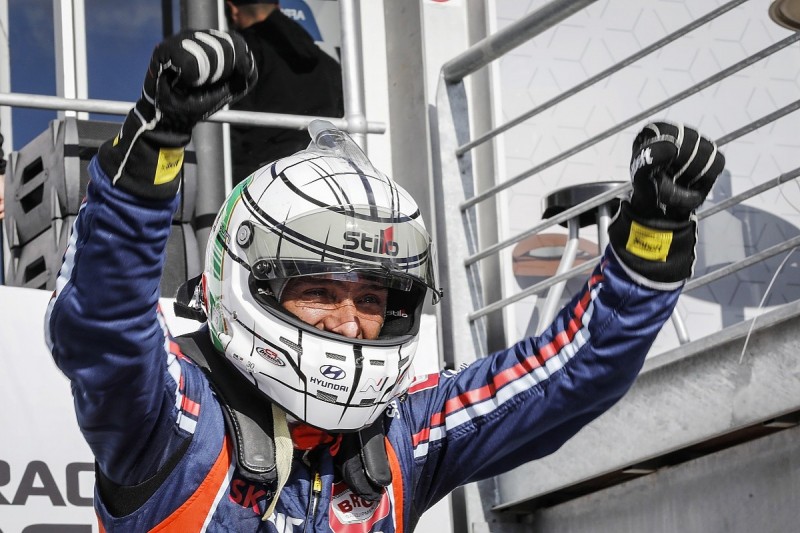 Tarquini therefore remained ahead until the finish, eventually beating 2017 WTCC Bjork over the line by half a second, with Huff a further two seconds back.

Jean-Karl Vernay, the 2017 TCR International Series champion, brought his Audi RS3 LMS home fourth over the line ahead of Bennani, although the Moroccan was later slapped with a 10-second penalty for hitting Guerrieri at the start that dropped him to ninth.

That meant Gordon Shedden assumed fifth on his first World Touring Car start, with Guerrieri sixth - some four seconds behind the Briton and with Munnich Motorsport team-mate Yann Ehrlacher on his tail.

Aurelien Comte was eighth in the revised classification in his DG Sport Peugeot 308TCR ahead of Bennani.