This year Hyundai has embraced this idea but given it a modern twist as motorsport continues its transition into an electric and hybrid-powered future. The South Korean marque is among many manufacturers in the automotive industry investing in developing more sustainable technology for its vehicles by using the power of motor racing as its test bed.

Hyundai is among three manufacturers, alongside Cupra and Alfa Romeo, represented in the all-electric FIA ETCR eTouring Car Cup, launched in 2021. This project runs alongside its ongoing commitment to the World Rally Championship, which boasts new-for-2022 Rally1 hybrid regulations, using hybrid vehicles powered by 100% sustainable fuels.

To showcase its latest offerings, Hyundai challenged two of its factory drivers to swap offices for the day at Belgium’s Zolder circuit for a special demonstration during a round of the ETCR series. WRC driver Thierry Neuville jumped behind the wheel of Hyundai’s all-new Veloster N ETCR car, while ETCR pilot and tin-top ace Norbert Michelisz climbed aboard Neuville’s i20 N Rally1 hybrid.

First of the duo to take the plunge is 2019 World Touring Car Cup champion Michelisz – a self-confessed WRC fan. The Hungarian takes the wheel of the i20 N, with Neuville placed in the unusual position of co-driver. The i20 N started life as an underdeveloped and fragile rally car, but Hyundai’s expertise has since turned this into a four-time rally winner, following triumphs in Sardinia, Finland, Belgium and Greece, where it recorded a history-making first WRC podium lockout for the marque earlier this month.

PLUS: How team orders could make Hyundai's historic Acropolis Rally a Greek tragedy 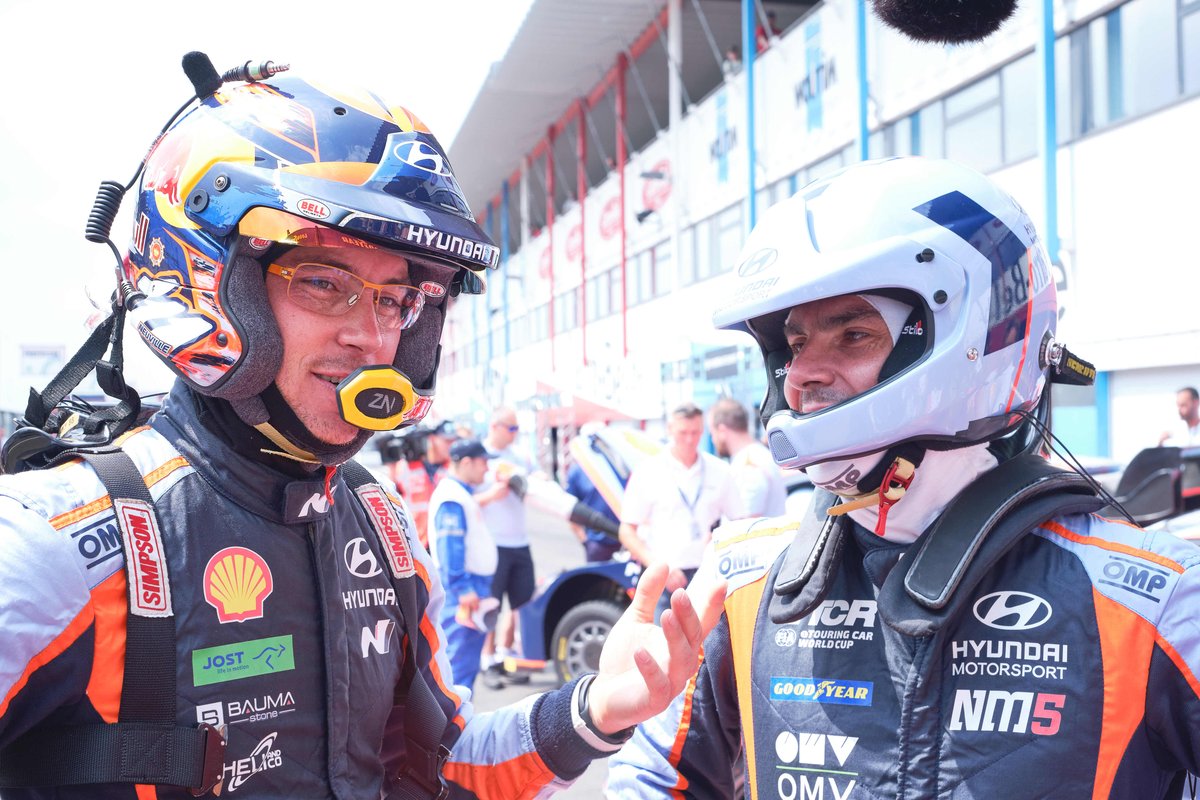 The i20 N Rally is powered by a 1.6-litre turbocharged internal combustion engine paired with a 100kW control hybrid unit, designed by Compact Dynamics. When engine and hybrid are engaged, the car is capable of producing 500 horsepower in short bursts. Hybrid boost is deployed by the use of the throttle pedal, while further boosts are unlocked through energy regeneration under braking. Drivers are required to regenerate 30 kilojoules of energy before another boost is granted that will be used the next time they touch the throttle pedal.

Unlike its previous iteration, the four-wheel-drive i20 N features a five-speed gearbox and 15% less downforce created through aerodynamics. The sophisticated centre differential of old has been replaced by simpler front and rear differentials.

“I was really looking forward to this because from a very early age rallying was something very interesting,” enthuses Michelisz. “I follow the WRC, and of course I know the drivers there so it was a great experience and great pleasure to try something new, but even more to try the i20 N Rally1. It’s an unbelievable car.

"Many people underestimate this sport from the outside, but after this experience you realise that it’s something unique" Norbert Michelisz

“The plan was to do some laps of Zolder, but the car had the gravel set-up so I wasn’t sure what to expect. In the end Thierry was a big help, he helped me with the approach, reference points, and I realised very early that I can build the confidence to push.

“The basic things are very similar. In the rally car it was about putting the car straight and then you can go back on throttle, and like this you can be efficient and not overheat the tyres. Of course, you do a bit more sliding but the philosophy to be fast is more or less the same.

“I always had a huge respect for them [rally drivers] because for me they are doing an amazing job, and they are doing it by feel many times. It’s something unique and something very different to what we are doing. I had some idea about how to approach this but at the end of the day sitting inside the car and having him [Neuville] beside me you gain even more respect.” 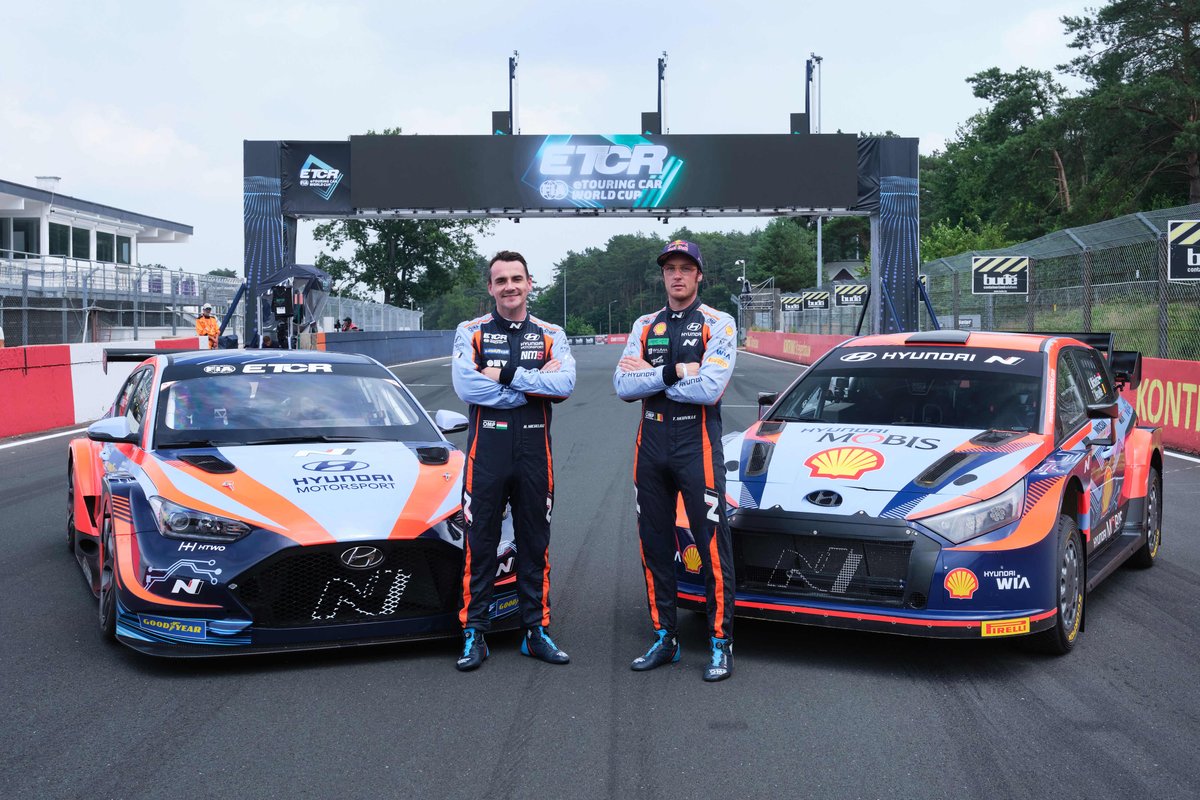 Then it’s time for Michelisz to act as teacher while five-time WRC championship runner-up Neuville takes the wheel of the Veloster N ETCR machine. While Neuville has successfully raced an i30 N TCR car, and even enjoyed a win in the TCR Germany series in 2019, driving a full-electric race car is a new experience.

The rear-wheel-drive Veloster N ETCR is powered by four Magelec-produced electric motors with two fitted to each rear wheel, which work independently. Power is provided by an 800V, 65kWh battery system manufactured by Williams Advanced Engineering. At its peak, the car – which weighs in at 1800kg, 500kg heavier than the i20 N Rally1 – can produce 500kW, which equates to 670 horsepower. Power is delivered through a single-ratio gearbox, which means there is no gearshift to be operated by the driver during the short, sharp rallycross-style knockout circuit races that make up an ETCR round.

“What a great experience,” beams Neuville. “It was interesting, it’s a new experience for me with a fully electric car and on a race track as well. The format looks really interesting and the competitions are only three or four-lap races and are quite intense. It seems as though it [full electric power] is better adapted to circuit racing, as for rallies the infrastructure is completely different.

So could there be a career swap on the horizon? Neuville admits he would be open to contesting an ETCR race: “I have done TCR races before, but maybe in the future I will join an electric race as well.”

Michelisz, still in awe of the skills required to be successful in rallying, reveals that he would also like to try a rally in the future. “I am not on the level of them [WRC drivers] but my plan was to always try it,” he says. “Of course I’m quite busy with the double programme in WTCR and ETCR but I really hope in the future I will have a possibility. Then again it has to be the right set-up. It’s a dangerous sport and you have to respect it.

“You really need to do a lot of preparation and you need to put a lot of effort into making the right decisions and having a good set-up, which is not easy. Many people underestimate this sport from the outside, but after this experience you realise that it’s something unique.”

But for now Neuville and Michelisz will focus on the familiar worlds of rallying and touring car racing. 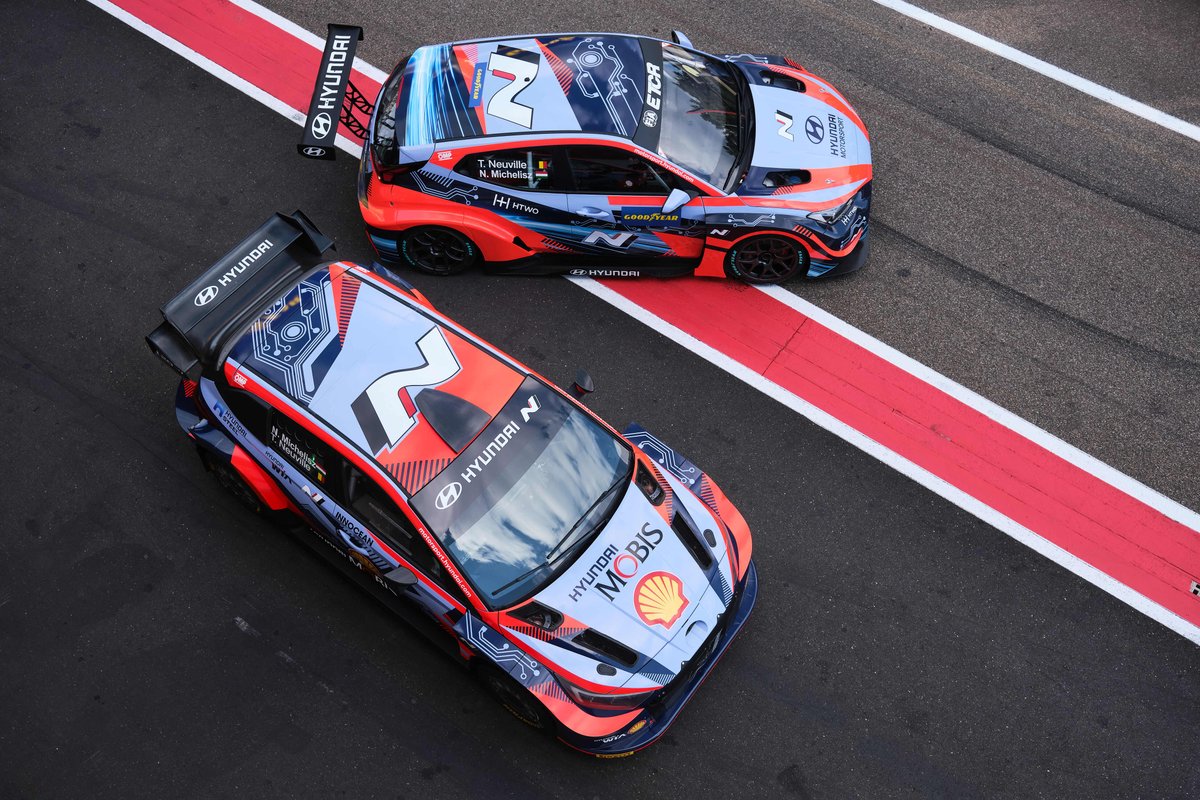