Norbert Michelisz was fastest in practice for the Hungarian round of the World Touring Car Cup, setting a new fastest lap of the Hungaroring in TCR machinery

BRC Racing driver Michelisz set the quickest time in the opening practice session in his Hyundai i30 N, with the similar YMR car of Yvan Muller on top later in the morning.

Michelisz set his stall out early in the opening practice session, recording a fastest time of 1m52.657s that bettered his own qualifying lap record from last year.

The home favourite set another time that would have been good enough for top spot - a 1m53.014s - but his ultimate best still left him 0.544 seconds clear of the second-place YMR Hyundai of Thed Bjork.

Esteban Guerrieri headed a Munnich Motorsport Honda 3-4 in first practice, lapping five thousandths slower than Bjork. James Thompson, who admitted he is still struggling for consistency with the gearbox on his Honda Civic, was fourth and half a tenth slower than team-mate Guerrieri.

Wildcard entrant Daniel Nagy ended FP1 fifth in his Hyundai run by Michelisz's M1RA team, with the third and fourth regular Hyundais of FP2 pacesetter Muller and Gabriele Tarquini next up in sixth and seventh respectively. 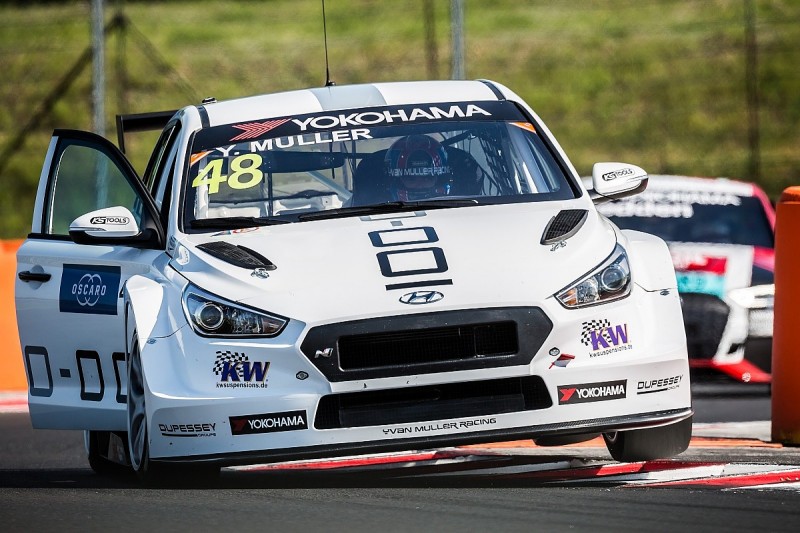 Muller had to have his right-hand door taped up during the second session, but returned to the track and ended FP2 fastest - half a tenth slower than Michelisz's earlier benchmark - eclipsing team-mate Bjork in the final moments of the session by 0.083s.

Michelisz completed a Hyundai 1-2-3 in that session, lapping four tenths slower than Muller, while Yann Ehrlacher ended FP2 as the fastest of the Honda contingent a further 0.044s back.

Sixth was the Volkswagen Golf GTi of Rob Huff, who was the early pacesetter, ahead of the impressive Nagy and Thompson.

Aurelien Comte was the busiest man in practice, completing 27 laps across the two practice sessions in his Peugeot 308TCR. He ended both sessions in eighth, beating Gabriele Tarquini in the second session.

The second Hungaroring wildcard entry of Attila Tassi completed the top 10 in FP2 and was 1.081s off the pace, having finished the morning's opening session in 25th.

Gordon Shedden could only manage the 26th and 24th fastest times in the respective practice sessions, while WRT Audi team-mate Jean-Karl Vernay had a number of laps chalked off for exceeding track limits in FP2 and was slowest of those to complete a representative lap in 26th.