Vervisch benefited from a rapid getaway and emerged from a hectic opening lap in second, chasing the fast-starting Alfa Romeo Giulietta Veloce of Ma Qing Hua.

Once racing resumed after an early safety car, Vervisch kept the pressure on and swept by after a mistake under braking cost Ma the lead on lap four.

Vervisch ran untroubled for the remainder of the race on his way to sealing the first Audi win of the year by 2.8 seconds.

"A great race and great result," said Vervisch. "At Turn 3 I was lucky as I got hit from behind.

"It was just about keeping the pace and we had good pace. [Ma] was quicker on the straights, but I could put him under pressure and he was very fair when I overtook him."

Rain was a threat just before the race, as it had been in Friday qualifying, but it was not enough for drivers to opt for wet tyres as the race was not declared wet.

Ma inherited the lead while polesitter Nicky Catsburg slid wide in the slippery conditions in his efforts to sweep around the outside of the Alfa heading through Turn 1.

After surrendering the lead, Ma came under attack from Norbert Michelisz in the best of the BRC Racing Hyundai i30 N cars.

But the Alfa driver held on despite an attempt around the outside from Michelisz in the closing laps of the race, ensuring Team Mulsanne secured its first podium finish of 2019 with second ahead of Hungarian Michelisz.

Jean-Karl Vernay finished a lonely fourth in his WRT Audi RS3 LMS, having survived a tag in the rear under braking heading into the tight third corner during the opening lap fall-out in tricky conditions.

A hectic tussle for fifth place eventually went the way of Augusto Farfus, who charged through the pack methodically from a lowly 19th place on the grid.

The Brazilian had carved his way into the top 10 before the early safety car, and soon joined a train of cars stacked behind the fifth-placed PWR Racing Seat Cupra of Daniel Haglof. 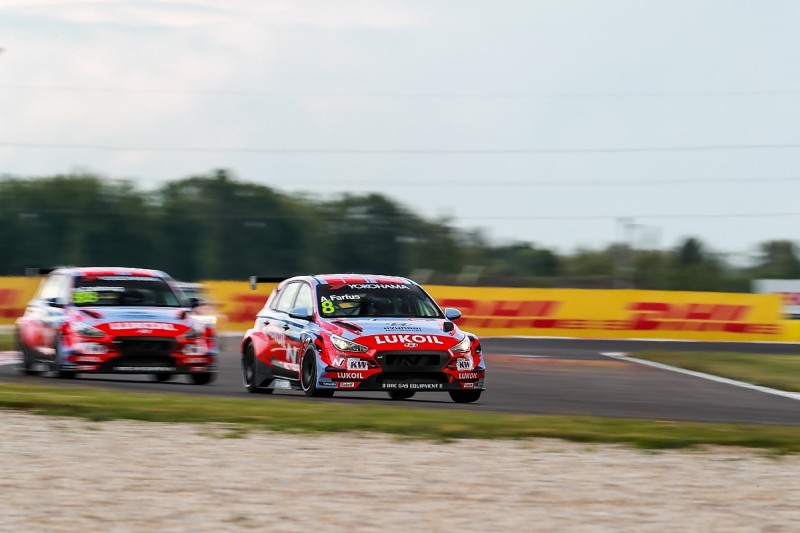 After slipping by BRC team-mate Catsburg, Farfus out-braked Haglof heading into the first right-hander on lap seven, with Catsburg colliding with Haglof as the pair entered the following straight.

Another Hyundai i30 N finished sixth as reigning champion Gabriele Tarquini fought through from 13th, disposing of Catsburg who fell back to seventh having also clipped a tyre stack.

Tom Coronel (Comtoyou Cupra) was eighth ahead of Mikel Azcona (PWR Racing Cupra), while Luca Engstler's wildcard Hyundai rounded out the top 10 ahead of the best of the Cyan Racing Lynk & Co 03 cars of Yvan Muller.

Championship leader Nestor Girolami failed to finish, after the Munnich Motorsport Honda Civic made contact with the second Comtoyou Audi of Niels Langeveld on a frenetic first lap.

Girolami's Munnich Motorsport team-mate Esteban Guerrieri pitted during the subsequent safety car interruption and could only recover to 15th, while Haglof fell back to 19th after running fifth.