Qualifying began in damp conditions after the threatened downpour finally occurred in the build-up to Q1, drivers experimenting with a mix of wet and slick compounds initially as the surface dried.

By the start of Q3, the five fastest cars all took to the circuit on slicks at its driest, Catsburg opting to run last after topping both sessions prior to the final shootout.

Just like in Hungary, Michelisz squeezed into the final part of qualifying and was left to run first on the road.

The Hungarian's 2m09.746s lap was good enough for a front row start, while Team Mulsanne's Alfa Giulietta Veloce enjoyed a best result of third thanks to Ma Qing Hua.

PWR Racing had another strong qualifying performance thanks to Daniel Haglof, who made it into Q3 and backed that up with fourth on the grid in his Seat Cupra ahead of Munnich Motorsport's Esteban Guerrieri.

Haglof's late flyer in Q2 bumped Kevin Ceccon's Alfa out of the running in sixth, while Niels Langeveld for Comtoyou Audi Sport was the only Audi to make it to Q2 - ahead of the Cupra of Aurelien Panis. 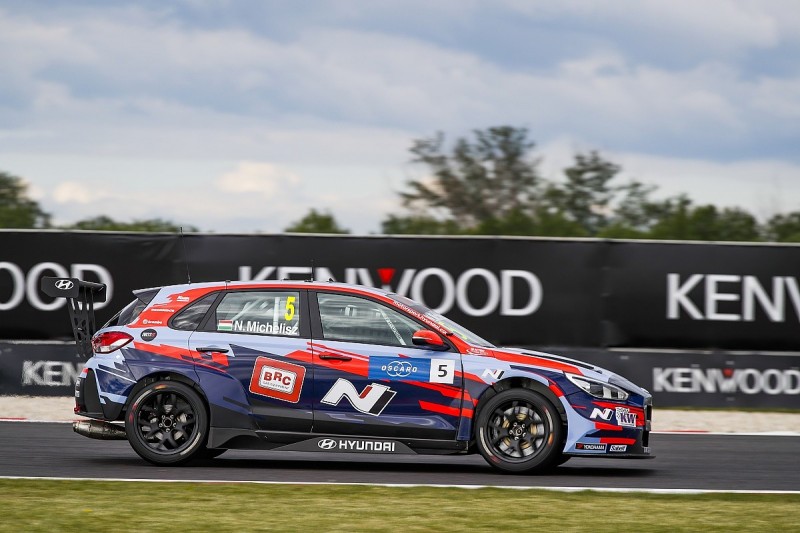 Munnich Motorsport Honda Civic's championship leader Nestor Girolami opted for a steady end to Q2 and was rewarded with ninth place and a front row start for race two, where he will be joined by Sebastien Loeb Racing's Rob Huff, who starts from pole for the second race after posting the 10th quickest time.

The drying conditions of Q1 proved the undoing of several regular frontrunners.

Reigning champion Gabriele Tarquini was one of those who missed out on Q2, a mixed tyre choice limiting his progress as he qualified 16th ahead of the similar Hyundai i30 N of Augusto Farfus.

"It's not my day", said Tarquini. "This was just not clear on tactics, and I was wrong on tactics. I was not on the right tyres. It was my tactic, but you cannot be right 100% of the time."

Thed Bjork gave Cyan Racing some positives by making the Q2 cut in 11th place, on a day of struggle otherwise for the Lynk & Co 03 quartet.

Of others that failed to make it into Q2, Yvan Muller could only manage 20th on the grid, while Tom Coronel will start from the back of the grid after a puncture sent him bouncing through the grass when track conditions were at their best.