Michelisz had shared fastest times with Rob Huff in Saturday's earlier practice sessions, but the factory Honda Civics proved to be a cut above the opposition in qualifying.

Hungarian Michelisz set fastest times in all three sectors on his Q3 shootout lap, recording a 1m55.846s to claim pole by 0.684 seconds.

That was ultimately ahead of Munnich Motorsport driver Huff, with Michelisz's team-mate Tiago Monteiro wrecking his chances of a front row start with a lurid slide on the brakes into the final Turn 26 roundabout.

That left the early qualifying pacesetter with the fourth-best time at his home circuit.

While Huff couldn't match the ultimate pace of the Civics, his independent Citroen C-Elysee was well clear of the leading Volvo S60 Polestar of Thed Bjork who qualified third with a 1m56.919s.

Bjork's team-mate and championship leader Nicky Catsburg will start Sunday's main race from fifth, but did not set a time in the shootout after slowing just before the start of his flying lap.

Catsburg, who complained of a vibration issue, was asked by his Volvo team to attempt a lap but replied: "No, I don't want to take the risk."

The top five drivers were well clear of the chasing pack in making the cut for Q3, with Tom Chilton some six tenths shy of Catsburg's pace in the second part of qualifying.

Chilton jumped his Sebastien Loeb Racing team-mate Mehdi Bennani in the order after an improvement on his final lap in Q2, with the pair sixth and seventh respectively.

Esteban Guerrieri qualified his Campos Racing Chevrolet Cruze eighth ahead of the third S60 Polestar of Nestor Girolami, who endured a tumultuous first part of qualifying, with hasty repairs made to his car in first practice to seal his bonnet, but scraped through to the second session.

Ryo Michigami will start a World Touring Car Championship race from pole for the first time after qualifying 10th.

The Japanese driver beat John Filippi and Yann Ehrlacher to the position in Q2 despite having his fastest lap time deleted, and as a result will start Sunday's opening reversed-grid race from the front.

There were no major casualties in the first part of qualifying - paused for 25 minutes for track and barrier repairs - with RC Motorsport drivers Kevin Gleason and WTCC debutant Manuel Fernandez, plus the Zengo Motorsport Civics of Aurelien Panis and Daniel Nagy eliminated.

Tom Coronel had already been ruled out of the session - and the remainder of the weekend - after a hefty crash involving a fire truck in first practice. 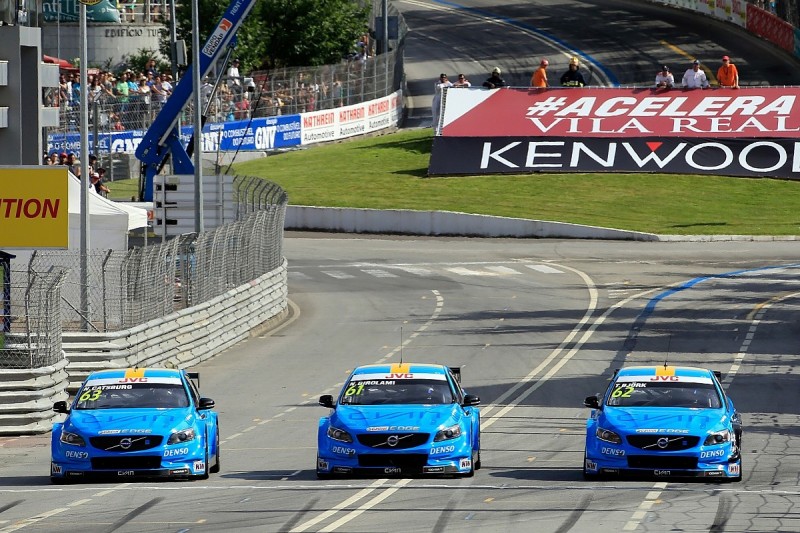 Volvo claimed another victory in the MAC3 time trial, as both manufacturers' runs were affected by slow cars.

Catsburg hung off the back of the train, but carried his car - which still appeared to be hobbled after qualifying - across the line comfortably enough.

Michelisz and Michigami leapt away at the start of the manufacturer's run, but the pair appeared to back off towards the end of their first lap and kept Monteiro in tow thereafter, with the time-setting third car required to finish within 15 seconds of the first one in order to score manufacturer points.