Huff got close to usurping the previously dominant Hondas with his first serious flying lap of the Portuguese street circuit in FP2.

The 1m58.117s he recorded in his Munnich Motorsport Citroen C-Elysee was just 0.060 seconds short of Michelisz's 1m58.057s best, although he had been up on the benchmark through the second split before dropping time in the final sector.

But the Briton made no mistake with his final effort with two minutes of the session to run, recording a 1m58.030s to snatch top spot.

Michelisz was baulked by traffic on his final run and missed out on the chance to improve his time, instead settling for second ahead of team-mate and home favourite Tiago Monteiro.

The leading Volvo S60 Polestar of Nicky Catsburg was fourth ahead of team-mate Thed Bjork, while Campos Racing's Esteban Guerrieri (Chevrolet Cruze) and the Sebastien Loeb Racing C-Elysee of Mehdi Bennani were the only other drivers to get within a second of Huff's best. 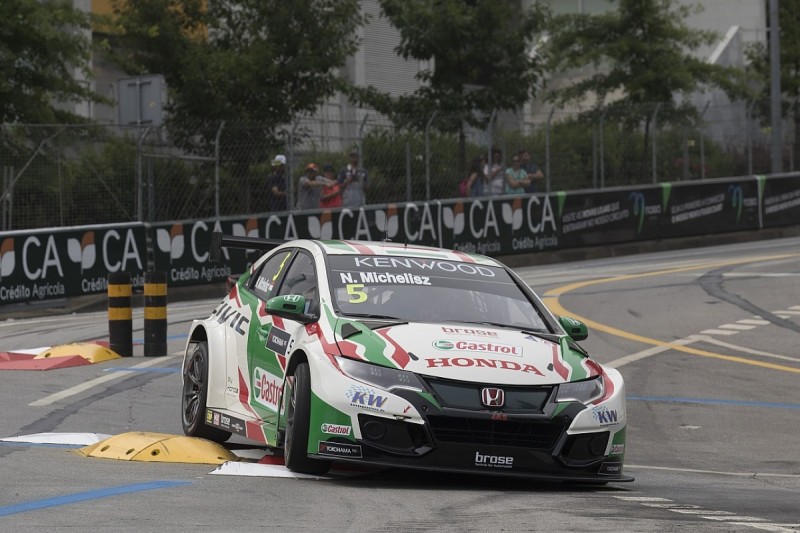 Third- and fourth-placed Bjork and Huff were more than a second off the pace, ahead of Catsburg and Bennani.

Tom Coronel was 14th in FP1 but will take no part in the remainder of the weekend after crashing into a stationary fire truck.

The Dutchman was unable to brake for the Turn 23 right-hander after a fast downhill section towards the end of the lap and went straight on past a crash barrier into the side of the truck.

His front-left wheel had worked itself loose as he approached the braking zone and broke free just before the impact.

Coronel won the opening race at Vila Real last year, but his ROAL Motorsport Chevrolet Cruze will now be repaired before being packed for ship freight ahead of the next round of the season in Argentina.

WTCC debutant Manuel Fernandes was 15th in both sessions in his RC Motorsport Lada Vesta, finishing the second 5.450s off the pace.

Drivers were also allowed to use the two sessions to get used to the Vila Real joker lap.

The format is being used in the championship for the first time this weekend and at Vila Real comprises a tighter left-right sequence around the Turn 26 roundabout before the finish line, which is around two seconds slower than the conventional corner.

Michelisz had six attempts at the joker in FP1 and seven across the two sessions, while Monteiro completed a total of nine attempts during practice - more than any other driver.