Michelisz was afforded a break at the start when front row partner Rob Huff stalled, allowing the Civic a clean run to the first corner as the field swallowed up Huff's Citroen C-Elysee.

The leading Volvo S60 Polestar of Thed Bjork gave chase gamely but never looked likely to challenge Michelisz's lead, with any threat neutered when the pair both opted to serve their joker laps at the same time.

Having extended his lead to a second in the closing stages, Michelisz was able to back off and clinch his first win since the reversed-grid race at Motegi last year.

There was no repeat of Tiago Monteiro's main race win from 12 months earlier, but the Portuguese consolidated the championship lead he reclaimed in the opening race with a second podium of the day at his home round. 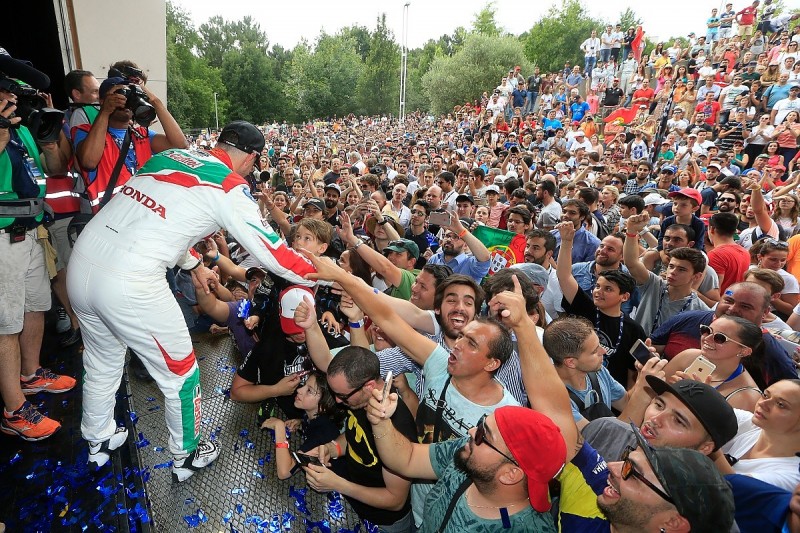 Monteiro was close to two seconds behind Bjork at the finish in his Honda Civic, and was a comfortable margin clear of the second Volvo of Nicky Catsburg.

Behind Catsburg, Huff staged a remarkable comeback to finish fifth - a just reward for a strong opening lap recovery and later a canny joker lap strategy.

Having briefly dropped to the back of the field, Huff quickly worked his way back through the order to run 11th by the end of the first lap.

He then waited until lap five of the 13 to serve his joker, staying out when first John Filippi and then Esteban Guerrieri and Yann Ehrlacher took theirs on the third and fourth laps to jump all three for eighth.

His superior pace on the subsequent lap - at the time the fastest of the race - also jumped him ahead of Mehdi Bennani and Nestor Girolami when they served their jokers on lap six.

But there was further progress still to come for Huff, who hounded the Sebastien Loeb Racing C-Elysee Tom Chilton for fifth in the second half of the race.

Huff nudged his compatriot aside through the fast downhill section with a little more than two laps left, and made a move stick at the Turn 23 right-hander.

SLR team-mates Chilton and Bennani finished in lonely sixth and seventh places respectively, while Campos Racing's Guerrieri got the jump on Girolami on the final lap to claim eighth in his Chevrolet Cruze.