Coronel was travelling through a fast downhill section towards the end of the lap when his Chevrolet's left-front wheel failed.

He went straight on past the Turn 23 right-hander down an escape road.

Having missed a crash barrier, the Dutchman's Chevrolet Cruze came to a halt when it smashed into the side of a fire crew van.

Coronel and his ROAL Motorsport team later discovered the bolts on his front-left wheel had broken, with the wheel working itself loose on the downhill run and breaking free before the collision.

"Under braking, many things happened underneath the car, but it certainly didn't brake," said Coronel.

"I ran through the grass at high speed, hit an obstacle and finally came to a halt against an ambulance that was parked there.

"The impact was huge; it turned out that the reason was the five bolts of the left front wheel that were broken.

"I didn't have any brakes and couldn't do anything because of it.

"In hindsight, I'm happy the ambulance was parked there rather than blocks of concrete with the impact that would have caused.

"All the safety measures worked well and an investigation by the FIA revealed that the force of the impact was around 25G.

"The safety belts of the car were cut in two [after the incident, to prevent re-use], just like the ties of the HANS system.

"The serial number of my helmet was noted. That can never be used again." 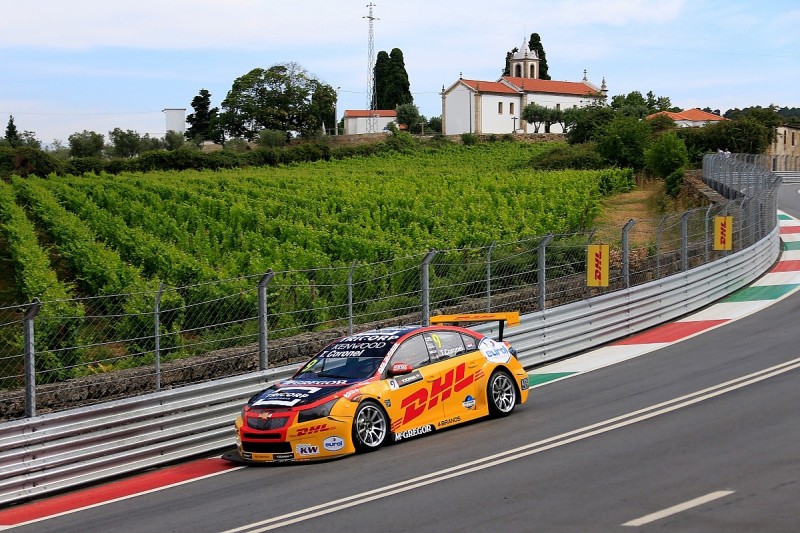 Coronel won the opening reversed-grid race at the Portuguese street venue a year earlier, but was ruled out of any further participation in last weekend's event by the crash.

His Cruze was transferred by ROAL to Campos Racing, the other WTCC outfit campaigning a Chevrolet, to be repaired at its workshop before the series' cars are transported by sea freight to Argentina.

"The engine was dislocated, the entire front wheel suspension was broken and there was massive damage to the bodywork and the chassis," Coronel continued.

"The ROAL Motorsport mechanics already started to remove the parts that were damaged.

"Before the races started, they left with the wreck to head to Barcelona, where the car will be rebuilt for the second half of the season.

"Campos still has two of these cars that we can use for spare parts and they have also made two mechanics available to support us to stay within the timeframe.

"On Tuesday next week, the cars have to be delivered in Frankfurt for the crossing to Argentina, where the next round will be held.

"There is a lot of work to do to get everything sorted in time, but everybody has assured me that they are confident."