Bjork had started sixth for the reversed grid race, but a rapid start propelled him to fourth as he squeezed between Tom Chilton and Tom Coronel when the lights went out.

A poor start from front row starter Esteban Guerrieri meant Bjork was running third by the time the WTCC grid went through the first corner.

A duel between polesitter Nestor Girolami and Mehdi Bennani involved a touch of wheels at the start, allowing Bjork to sit close behind them.

Bjork had to wait until the two mile straight at the end of the opening lap to slipstream his way past Bennani and into second, before repeating the feat on the second tour to wrestle the lead from Girolami.

The Volvo driver then ran unchallenged to the flag ahead of Bennani, with Girolami's race ruined by a puncture that forced him into the barriers and elevated the privateer Munnich Motorsport Citroen of Rob Huff into third. 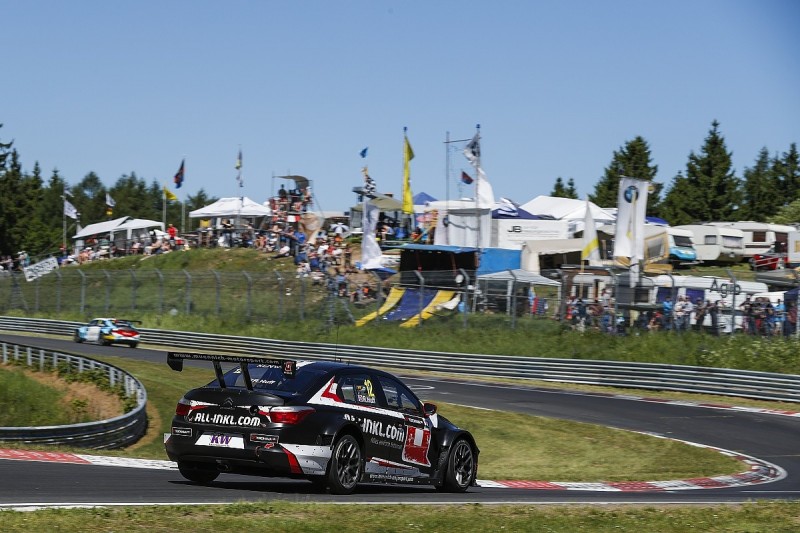 Huff worked his way up the grid from eighth with a series of impressive passes and moved clear of Chilton for the final podium place on the last lap.

Fifth went the way of Guerrieri, who progressively slipped down the order after a poor start from second.

Nicky Catsburg won the duel for sixth in his Volvo after defending resolutely from the Honda of Norbert Michelisz and ROAL Motorsport's Tom Coronel.

Yann Ehrlacher was ninth ahead of Sebastien Loeb Racing's John Filippi and the Honda of Ryo Michigami.

The third works Honda of championship leader Tiago Monteiro struggled for pace throughout the race and picked up a puncture late on that left him last on the road.