World Touring Car Championship leader Tiago Monteiro has been forced to withdraw from the upcoming China round on medical grounds, and will be replaced by Gabriele Tarquini

Monteiro, who has a 12-point lead over Volvo driver Thed Bjork in the drivers' standings, crashed heavily at the Barcelona circuit's first corner during a test in early September after his brake failed.

He was taken to hospital in Barcelona before being transferred to a hospital in Portugal and, two weeks after the accident, returned home to begin his recovery process.

Monteiro has since revealed more details about his crash in a series of videos for the WTCC's official website, and has been focussed on getting back to full fitness after suffering compression of the nerves in his 255km/h (158mph) crash.

The 41-year-old has had continuous problems with his vision and, although he is expected to make a full recovery, has been ruled out of competing at the Ningbo circuit this weekend.

"As a team, we've worked incredibly hard to make it to the top of the championship and this is a huge setback to everybody.

"Unfortunately, the human body is what it is, and despite the outstanding efforts of my medical team, I just need more time.

"My focus now shifts to returning to fitness in time for Motegi later this month and resuming my title challenge there.

"I must say a big thank you to Gabriele for stepping in.

"He's a great friend and was a fantastic team-mate for many years in the WTCC, so there's nobody else I'd rather have in the car to support my title push."

Former factory Honda driver Tarquini will instead fill in for the Portuguese driver this weekend. 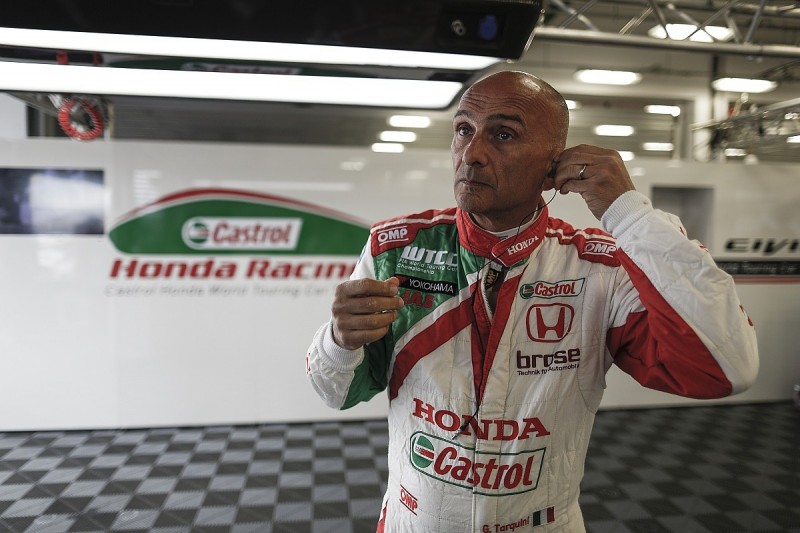 Tarquini, who helped develop the JAS Motorsport-built Civic WTCC and last raced for the team in 2015, has spent this season without a drive in the championship for the first time since its rebirth in '05 after Lada pulled its manufacturer backing at the end of '16.

"I'm pleased to return to the Honda World Touring Car Team this weekend, although I wish it had been in happier circumstances," said Tarquini, who gave Hyundai a win on its TCR International Series debut at the Zhejiang circuit in China last weekend.

"Tiago is a fantastic driver who has rightfully earned his place at the top of the championship and it's a real shame he has to miss this weekend.

"I'll do the very best job I can for Tiago and the team this weekend and hope that the combination of my experience of the Civic WTCC from 2014-15 and the levelling factor of a brand-new circuit can help me fight for a strong pair of results."