Finnish driver Niclas Gronholm withstood enormous pressure in wet conditions to win his home round of the World Rallycross Championship at Kouvola, becoming the third different winner this season.

Gronholm, son of double world rally champion Marcus, was fastest in Q2 on Sunday morning but had to endure the worst of the track conditions in Q3 and was beaten to top spot in qualifying by points leader Johan Kristoffersson.

Kristofferson, who won Saturday's round at Kouvola and Gronholm then won their respective semi-finals from pole to lock out the front row of the final, which took place in muddy and slippery conditions after rain during the knock-out races.

Double World RX champion Kristoffersson made the best launch to win the race to the first corner, but made an uncharacteristic mistake and his Volkswagen Polo ran wide after the apex, allowing Gronholm through on the inside approaching the uphill Turn 2 right-hander.

Kristoffersson broke out of the pack on the third tour to take his compulsory extra-route joker lap and dropped behind Ekstrom to third, ahead of Gronholm's GRX team mate Timur Timerzyanov, who had taken his joker on lap two. 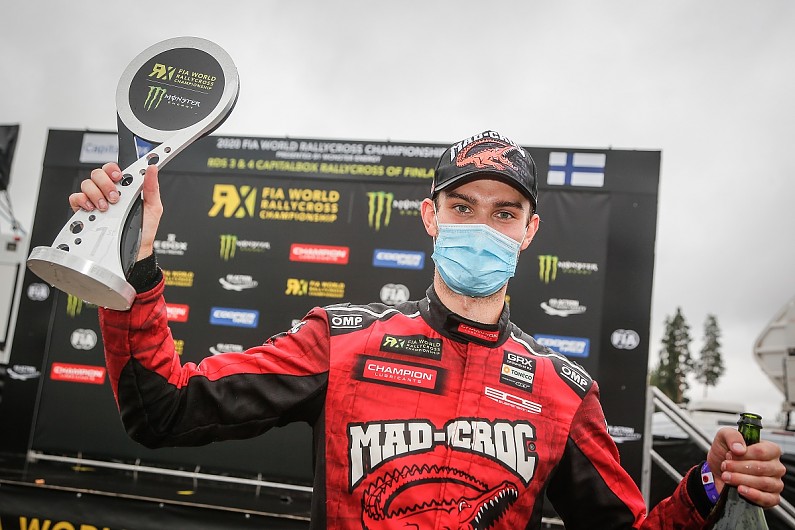 Such was Gronholm's defensive driving against Ekstrom that the top four cars ran bumper-to-bumper on the fourth lap, before Timerzyanov dropped back.

Gronholm and Ekstrom both took their jokers on the final lap, and a perfectly executed joker on the cleaner section of track allowed Gronholm to merge just in front of Kristoffersson and claim victory.

Double DTM champion Ekstrom then dived up the inside of Kristoffersson into the final turn, knocking the Polo sideways and allowing Timerzyanov to sneak underneath him for third.

Reigning champion Timmy Hansen finished fifth ahead of Andreas Bakkerud, the latter making it into the final after round three runner-up Juha Rytkonen was penalised for a track limits infringement in the semi-finals and dropped behind the Norwegian.

Among those who also missed out on the final were Hansen's younger brother Kevin - who was narrowly beaten to the line by Timerzyanov in the second semi-final and Timo Scheider, the double DTM champion missing out for the first time this year.