Gronholm made it into the final despite dropping to last in his semi-final after a clutch issue caused a slow start. Having fought his way back to win the knock-out race, the Finn lined up on the front row of the final alongside Kevin Hansen.

From pole, Hansen maintained the advantage ahead of Gronholm through the first series of corners (Turns 5, 6 and 7 of the Formula 1 layout) as behind Liam Doran made a move around the outside and challenged double DTM champion Timo Scheider for third.

Seat campaigner Scheider ran Doran wide on the exit of Turn 3, but then slammed the door on Krisztian Szabo on the entry to the next left-hander.

Stuck in the traffic, Doran was first to take his extra-route joker at the first opportunity, while up front Gronholm pressured leader Hansen hard, the pair dropping Scheider and Szabo behind.

On the fourth lap, Hansen over-rotated his Peugeot 208 in the circuit's uphill hairpin, Gronholm nudged his Hyundai i20 into Hansen's rear bumper and forced the Swede sideways, taking the position. 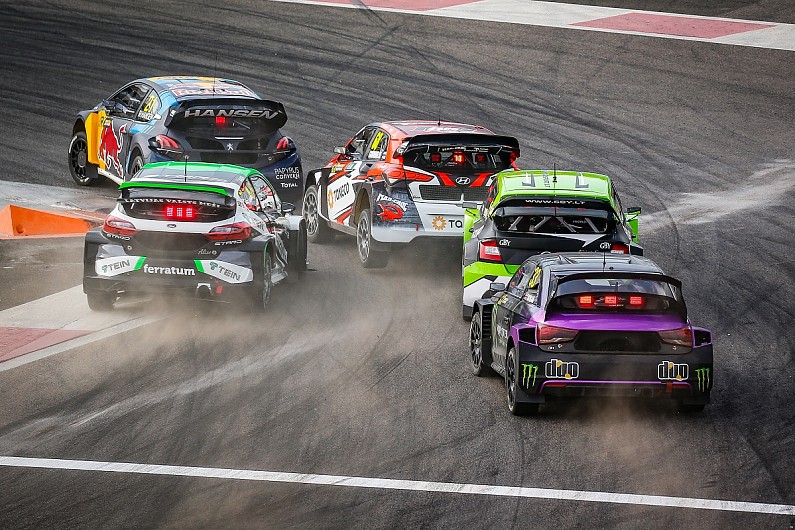 From there, Gronholm maintained track position, with Hansen following the new race leader into the joker on lap five, the pair holding position to the finish.

Behind, Scheider and Baumanis had jokered on lap four and were passed by Doran. On a mission, the Audi S1 driver jumped his car hard at the end of the fifth lap and moved ahead of Szabo for third, where he remained to the flag.

All three of the rostrum finishers visited the podium for the first time at Yas Marina, while Doran's top-three marked only the second for a British driver in World RX.

Doran's RX Cartel team-mate Andreas Bakkerud and overnight leader, fellow title-favourite Timmy Hansen, had a controversial accident in the third qualifier that put both drivers out of the running.

Hansen led the qualifying race and took a later joker than Bakkerud, but at the exit iof the alternative route into the first corner of the final lap, Bakkerud made hard contact with the left-hand side of Hansen's Peugeot.

While Hansen finished the race, Bakkerud retired on the spot. But, the substantial structural damage to Hansen's 208 forced the Hansen MJP squad to retire the car.

Bakkerud did make it back for Q4 and qualified for the semi-finals, but was later had his Q3 time scrubbed by the stewards, which put him out of the semi-final positions.