World Rallycross champion Johan Kristoffersson continued his incredible campaign by winning the last European leg of the season in Germany.

Kristoffersson, who had saved a set of new tyres for final stages of the event, survived a challenge from fast-starting Volkswagen team-mate Petter Solberg from row two on the run to the first corner to win his semi and net pole position for the final.

The final took two attempts to complete after a crash for Kevin Hansen on the fourth lap forced a red flag, with the Peugeot driver taken to hospital.

Again starting from row two, in the first run of the final Solberg made it to the first corner ahead, on the outside of front row starters Kristoffersson and Mattias Ekstrom, but ran wide and visited the gravel trap. Both Ekstrom and Kristoffersson also hit the outside Armco while Bakkerud snuck up the inside to take the lead. 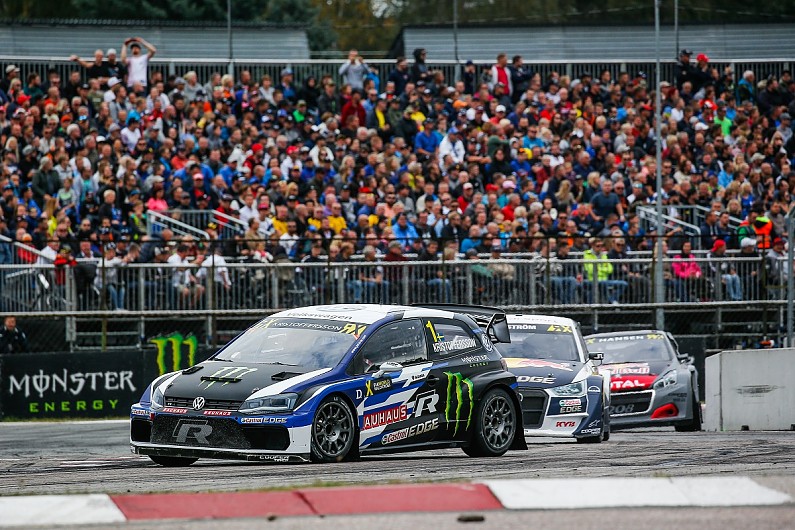 Kristoffersson held off Hansen for second in the run to turn two, while Niclas Gronholm passed Solberg for fourth. Kristoffersson passed Bakkerud for the lead at the first corner of lap two and was at the front when the race was stopped.

At the re-start, Kristoffersson made the best launch and held the inside at turn one, as Ekstrom also maintained position and ran second on the first tour in front of Bakkerud, Solberg and Gronholm.

The Finn took his last-corner joker at the first opportunity, before Solberg responded on lap two and maintained track position. But the Norwegian wouldn't make it to the flag. His Volkswagen Polo stopped with engine problems on the fifth lap, but it mattered little, as his PSRX Volkswagen Sweden squad had already wrapped up the teams' title for the second year in a row.

Bakkerud took his joker on lap four and covered off Gronholm, while the leading Swedish duo of Kristoffersson and Ekstrom took their jokers on the final lap. Kristoffersson claimed his 10th win of the season while both Audi drivers finished the marque's final home World RX round on the podium.

Sebastien Loeb retired from his semi-final after contact when making an overtaking move on Kevin Eriksson.