The Polo, a revised version of the squad's double-title-winning 2017 Supercar, features a new front bumper, different front wings and a more elaborate rear spoiler, similar to that seen on the final incarnation of VW's abandoned 2017 World Rally Car.

"After driving some rally cars in the winter and so on, it was a nice feeling to get back into such a car," Kristoffersson told Autosport.

"It was a good day, not so much driving because there was quite a lot of cars there so we didn't manage to do so many laps, but it's always nice to do a little shakedown for the car, team and also for the drivers."

Although no official announcement has been made, Kristoffersson appears set to remain with Solberg's PSRX squad for the defence of his title, with permanent entries for the 2018 World RX series closing on Thursday. 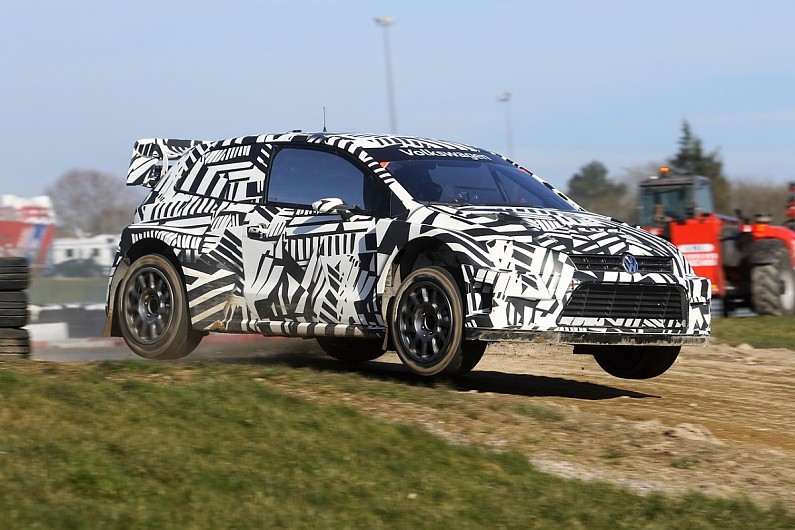 Asked about the updates to the Polo Supercar, Kristoffersson explained: "We are always trying to develop and work on details, but basically it is quite similar [to last year]. But, it's still a very early stage of the season before testing."

The Swede said that changes to the aerodynamic package would make a bigger difference on the series' faster circuits, but that it was an improvement overall.

"Maybe [it makes more difference] on the tracks that are a little bit more high speed, but also of course in rallycross it's very difficult to say because the grip level changes so dramatically from when you are on the track to the next time and it's almost a year since we were last at Mettet," Kristoffersson said.

"It would be possible to feel some difference if you do a back-to-back comparison on the same day at the same time."

Andreas Bakkerud made his first public appearance for the EKS team driving a 2017-specification Audi S1 Supercar at the circuit.

EKS's new 2018 car, built in conjunction with Audi Sport, is expected to be revealed in the coming weeks.

The G-Fors team also shook down its new Clio RS RX Supercar at the Mettet test.