While Neuville starred, title contender Evans was forced to retire after hitting a rock on stage three, while Sordo also spun into a ditch.

Championship leader Ogier is seventh behind the M-Sport Ford pair of Gus Greensmith and Adrien Fourmaux but is already 2m11.9s adrift after suffering a suspension issue.

The crews were presented with a narrow and twisty run through African bushland to kick off the rally proper following Thursday’s superspecial.

Neuville impressed from the outset as he guided his Hyundai through the tricky rocky gravel and sandy roads to win the opening test by 3.7s from team-mate Tanak, whose run was hampered by dust sticking to his windscreen due to a leaking screen washer.

Rovanpera was the best of the Toyotas in third, 5.6s adrift but ahead of his team-mates Evans and Ogier, who were the first two cars on the road.

The M-Sport Ford duo of Fourmaux and Greensmith produced a steady pace to end up seventh and 10th, while Hyundai’s Oliver Solberg was ninth but he clouted a bank that damaged his car.

The second stage of the day, Kedong (32.68km) - the longest of the rally - outlined how this event will punish competitors for minor mistakes.

Ogier, Evans and Sordo all hit trouble through the fast open gravel tracks that were accompanied by a smattering of wildlife, including a giraffe that was captured very close to the stage by Neuville’s onboard camera. 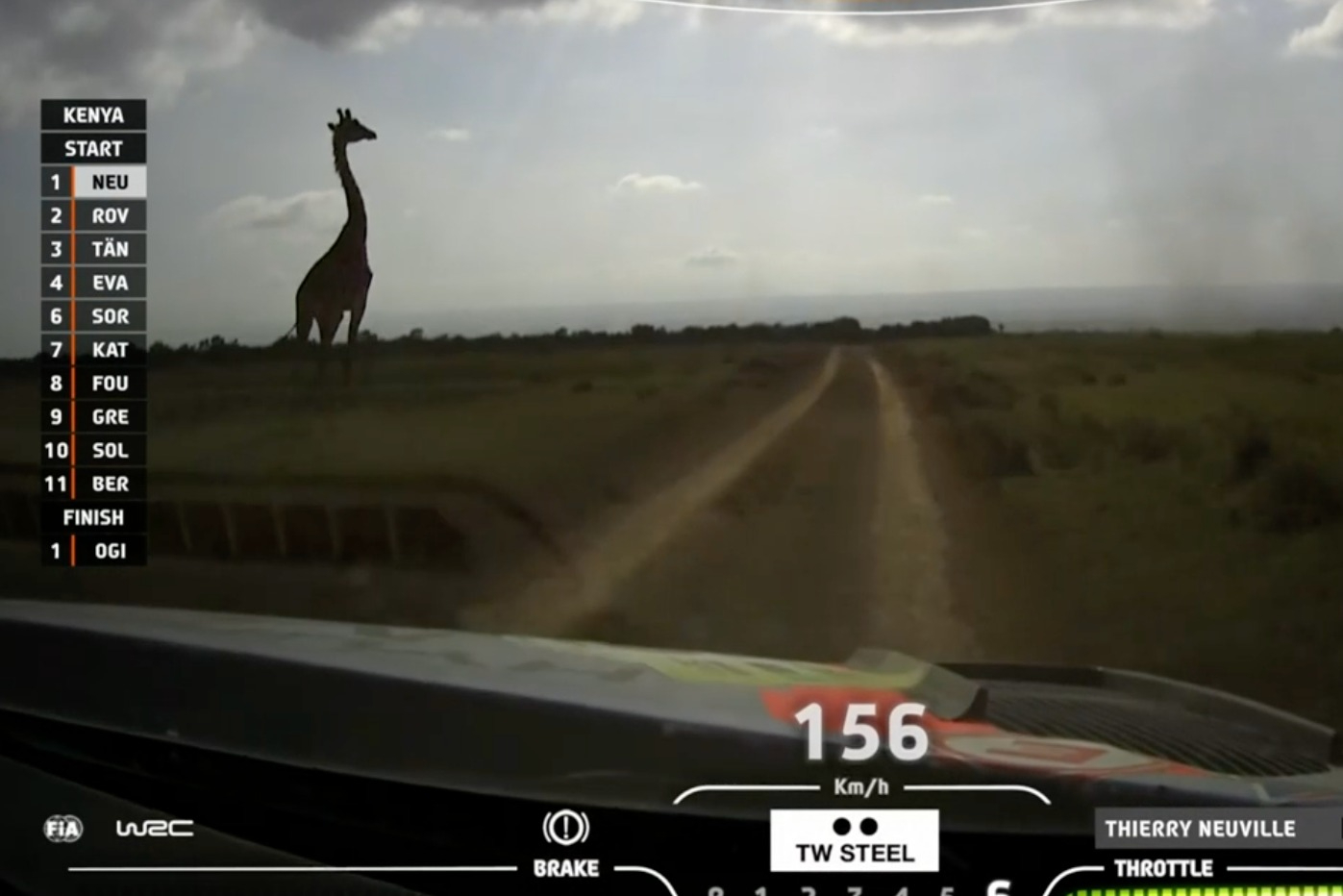 Roadsweeper Ogier, who earlier overshot a corner, ran wide up a bank which appeared to damage his rear suspension causing his Yaris to bounce awkwardly through the remainder of the stage, dropping 34.2s in the process.

However, much worse was to befall his team-mate Evans who hit a rock a little more than a kilometre from the finish that severely damaged his right-front suspension. After attempting a repair, Evans was forced to retire from the day.

Moments later Hyundai’s Sordo spun wildly off the road at speed and into a ditch, which left him stranded on the test.

It is expected the Spaniard, who retired from the previous Rally Sardinia after a rare driver error, will return to action on Saturday.

Meanwhile, there was no such trouble for his team-mate Neuville who continued his impressive speed to claim his second stage win of the day.

The Belgian took the test by 7.3s from Toyota’s Rovanpera, who was forced to battle through despite an incredible amount of dust coming into the car's cabin.

"It was an incredible stage. The condition is so bad and there are big ruts all the time," said Rovanpera.

“At the end of the stage, I had a puncture, and there was so much dust in the car I couldn't breathe - it's Safari for sure.”

Tanak was third fastest, a second slower than Rovanpera, admitting he wasn’t driving at the limit to ensure his Hyundai avoided damage.

"The only target was to not damage the car. It's already very demanding, so the second time I think it will be very much on the limit,” said Tanak.

Further back, Solberg hit trouble as the damage to his car suffered in the previous test was significant enough that he was 30 minutes late to the stage after conducting a repair.

Rovanpera stepped up his pace to win the final stage of the morning loop, an 18.87km blast through Oserian 1.

The Finn was 3.1s faster than Neuville while Toyota’s Takamoto Katsuta was 2.1s further back in third.

Tanak struggled, dropping 19.8s in the test losing yet more time to his team-mate Neuville.

However, Ogier was to suffer even more pain as he was forced to limp through the test due to his suspension issue, losing 1m38.6s to Rovanpera.

The opening day of the rally concludes with a second pass through the trio of morning stages.