Neuville had fallen from first to second on the Pozezdrze stage when he picked up a rear puncture on his Hyundai.

But while that put Ott Tanak's M-Sport Ford into a 14.4-second lead, Tanak arrived at the stage finish minus his car's rear wing - which he said had detached itself without warning on a straight.

Given the 2017 cars' reliance on aerodynamics, the rest of the day was always going to be a huge challenge for Tanak and Neuville was back in front within two stages.

He goes into Sunday's deciding four-stage leg with a 3.1s lead over Tanak.

The dramas of Pozezdrze brought Neuville's team-mate Paddon - with whom he shared the afternoon's stage wins - into contention at the front.

Paddon gained third when Jari-Matti Latvala's Toyota ground to a halt on Pozezdrze just before Tanak and Neuville's troubles, and starts day three 22.4s behind Tanak - but insisting his priority is not to risk his podium.

Sebastien Ogier had to cope with several niggling problems on his M-Sport Ford through the afternoon and is a distant fourth, though now pulling away from Dani Sordo after some small errors by the Hyundai driver. 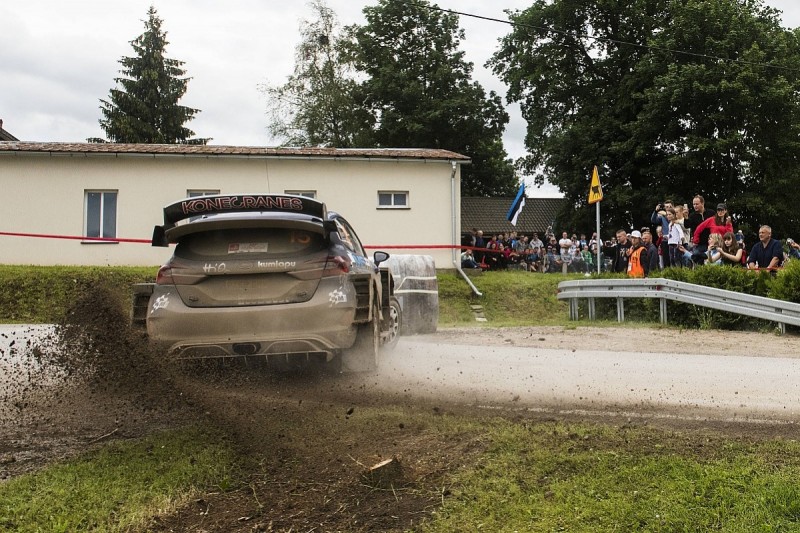 Toyota now has no cars in the top 10.

Along with Esapekka Lappi's Friday damage and Latvala's problem, Juho Hanninen was hampered by a lack of power through Saturday afternoon and fell to 11th behind the battling Elfyn Evans and Andreas Mikkelsen.

The gap between Evans and Mikkelsen had ebbed and flowed all day, with Evans finishing it 11.5s ahead having won the Mikolajki Arena superspecial for the third time in as many evenings.

Craig Breen was much happier with his car and the conditions on leg two and has worked his way back up to 13th overall, albeit seven minutes outside the points.