Neuville and co-driver Nicolas Gilsoul began Sunday's stages 3.9s behind their rival but won all four of the day's tests to eclipse Ogier, in what was the equal third closest finish in WRC history.

The result extends Neuville's championship lead to 27 points over Ogier, with the Belgian securing a maximum score after also winning the powerstage.

Neuville and Toyota's Jari-Matti Latvala are the only two drivers to take a maximum score since the introduction of the new WRC rules for 2017.

Neuville also managed the feat on last year's Rally Argentina, which he also won by 0.7s.

Ogier had been leading this weekend's rally since Friday afternoon, holding a lead of 19s after the opening day.

The world champion saw that gap eroded on Saturday however when a cautious run through the first pass of Monte Lerno and a stall on a short superspecial stage eroded his advantage.

The M-Sport driver was powerless to stop Neuville taking his ninth career win on Sunday, not being helped by a late scare with his time card where he initially left the stop line of the penultimate stage without it.

Toyota's Ott Tanak finshed that stage after Ogier, and picked up the time card to deliver it to the crew at the regroup before the powerstage. 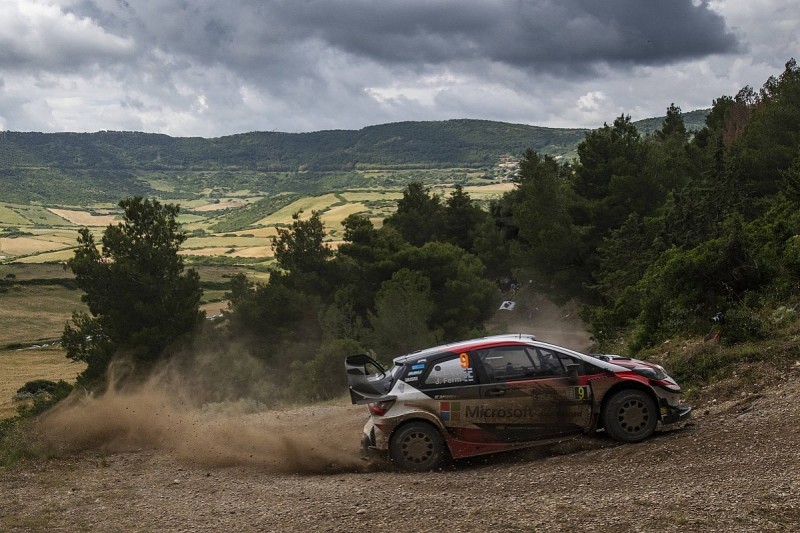 Esapekka Lappi took his first podium of the year with third place for Toyota, a result the Finn felt he deserved after showing the pace to do so earlier in the year.

Lappi had been battling team-mate Latvala for the position, but Lappi's run to third became a lot easier when Latvala was forced to retire on the road section back to service with alternator issues on Saturday night.

Hayden Paddon finished fourth for Hyundai on just his third rally of the year, edging out a close fight with Citroen's Mads Ostberg by 15.7s.

Craig Breen was a distant sixth after enduring a difficult weekend that began with handbrake issues on Friday.

The Irishman struggled to match the pace at the front thereafter. Latvala restarted on Sunday and headed a bunch of drivers starting under the Rally2 regulations to take seventh overall.

Tanak recovered to eighth, having retired from Friday's final stage with damage after a heavy landing over a jump.