There were six cars in the battle for the top position, but Juho Hanninen went off on the final stage of the day, SS9 Tergu-Osilo, having started it in second position, 7.9s behind Paddon.

Hanninen will start his Toyota Yaris on Saturday 38s behind Paddon in sixth overall, if the car makes it back to overnight service.

Rally leader Paddon suffered what he believed to be a broken front damper on SS7, and nursed his car back to secure the benefit of the rally lead and a favourable road position overnight.

He leads the rally by 8.2s from team-mate Thierry Neuville, who drove brilliantly as the second car on a very dusty road.

Neuville suffered a puncture on SS7, and managed the rest of the stages without a spare tyre.

M-Sport driver Ott Tanak moved into the podium places by pumping in a rapid stage time on the last test of the day thanks to taking an extra tyre for the loop, meaning his car was heavier but had more grip when his fellow competitors were struggling at the end of the afternoon.

He heads Toyota's Jari-Matti Latvala by just 0.3s, the Finn having a much better afternoon than morning, which brought him into contention. He lies 9.8s off the lead, although only 4.9s ahead of Mads Ostberg.

The Norwegian wasn't particularly happy with his afternoon, struggling with the rear end of his privately-entered Ford Fiesta, but the result proved contrary to his thoughts on his progress.

Sebastien Ogier is only seventh, now three seconds behind the delayed Hanninen.

With so many cars retiring on Friday, Ogier will still be relatively close to the front of the running order on Saturday and may have to do some road sweeping.

His opening day was ruined by opening the road, with no major issues with the car or driver. 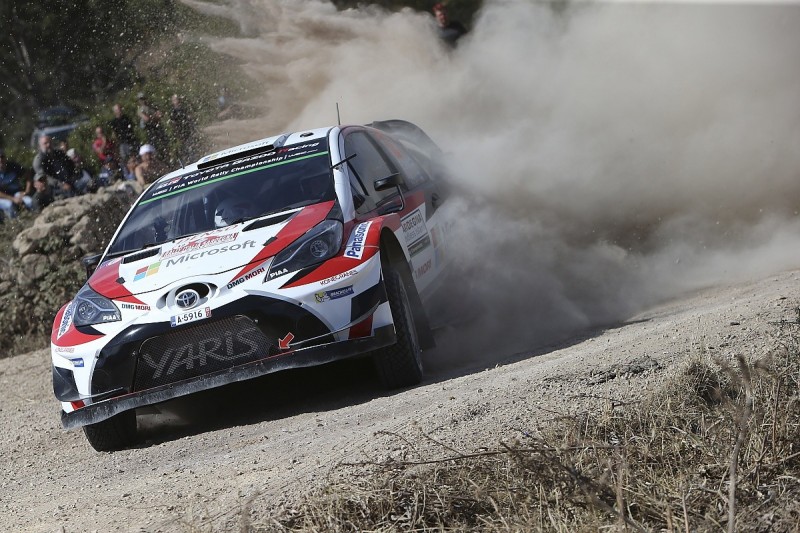 Recent Toyota newcomer Esapekka Lappi set his first ever WRC fastest time on the morning loop, incredibly after having no second gear for that stage.

He opened the afternoon with two more scratch times, before breaking a damper on the next stage. He still managed second quickest in his Toyota Yaris on the leg's finale and is eighth overnight.

Andreas Mikkelsen continued his tough day of adaptation to the Citroen C3 WRC, driving a 2017-spec WRC car for the first time. It was too tail happy for him when he prefers to drive the car "through the steering wheel".

Rounding out the top 10 is Eric Camilli in his Ford Fiesta R5, although the Frenchman isn't registered for the WRC2 category the car and driver usually compete in.

Instead, Jan Kopecky leads that class in his Skoda Fabia R5, by 52.7s over fellow Skoda driver Ole Christian Veiby.

Autosport Live coverage of Rally Italy resumes with SS11 from 7.35am UK time on Saturday