Event scrutineers have observed damage to the C3 WRC's rollcage and will not allow the car to return to the stages for the weekend.

Citroen now only has team newcomer Andreas Mikkelsen in contention, running eighth, as Craig Breen was also sidelined by a damaged gearbox casing in SS3.

"We have two cars which are not in the race anymore.

"The positive thing from the first stages was the pace of Kris - this was good and he was leading provisionally.

"But after this mistake, we have no possibility for him to continue.

"For Craig it was bad luck. He hit a rock after a compression on the jump and the gearbox was damaged."

Meeke had just taken over from Juho Hanninen in the lead of Italy's World Rally Championship round when the crash happened.

"It was a fourth-gear corner four or five kilometres into the stage," Meeke told Autosport.

"I slid wide, hit the bank and it spat me back into the road and over.

"What can I say? I've been trying so hard not to make any mistakes."

Meeke made it through the stage, dropping more than seven minutes in the process.

The accident follows mistakes on the proceeding rounds in Argentina and Portugal.

Nawarecki added: "It's disappointing. It was important for Kris to finish the rally and to bring some manufacturer points - this was the target of this rally." 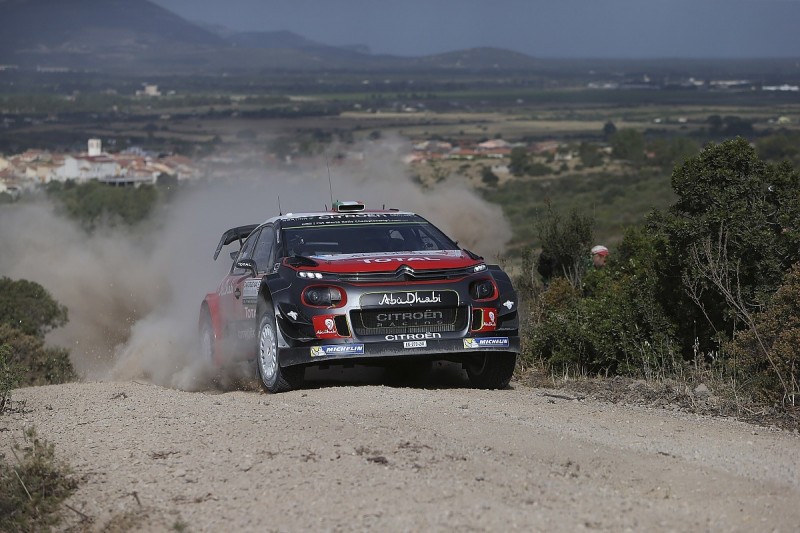 Breen is expected to return to action for Saturday with a new gearbox fitted to his car.

"We came over a jump and then after we landed there was a rock in the road," said Breen.

"It wasn't a big one, but the car was just coming back up after the compression.

"There was a bang, but everything carried on working as it was, we were able to change gear.

"But when we got to the finish of the stage, we could smell oil.

"For me, it feels like it's the same issue we had in Argentina, but we have to look."

Nawarecki said the team wanted to investigate further before commenting on whether it was the same issue as the shock-related gearbox failure Breen suffered in South America.

While his team-mates had dramas, Mikkelsen spent the morning getting to know the C3 WRC and admitted it was tougher than he had expected.

"This car has to be driven in quite a different way to the [VW] Polo," he told Autosport.

"I did one day of testing before here, but in the test you are going up and down the same piece of road - it's only when you come here that you find out what the car does."