Tanak had led the rally overnight following Thursday's superspecial stage but fell behind Ogier on the morning's opening stage when the M-Sport Ford driver edged ahead with a time 0.8 seconds faster.

Ogier held a one-second lead to Tanak, who was squeezed back into third by Neuville on the same stage, but the gap was obliterated when the Rally Finland winner blitzed Ogier by 5s through Mittelmosel's 13-mile run.

Tanak had previously claimed to be "learning" how to drive Rally Germany's stages in the Toyota and said he was struggling with stability in the high-speed sections.

But he did not relent in the final stage of the morning loop, again winning the contest and pulling another 3s on Ogier to hold a lead of 7.2s going into the afternoon loop.

Ogier narrowly beat Neuville in each of the three morning stages to hold an advantage of 3.7s over the Hyundai driver, who leads his title rival by 21 points going into the rally, in their fight for second.

Neuville's day could have been significantly worse as he stopped his Hyundai on the way to the fourth stage with an oil leak, suspected to be from a pipe related to the turbo.

He was unaffected on the final stage and the problem will be a fully inspected at service. 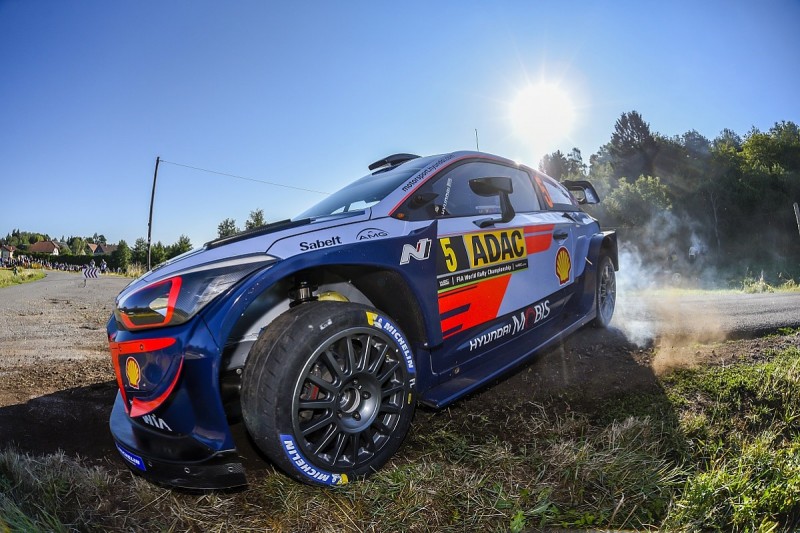 Esapekka Lappi finished the morning loop in fourth after admitting the increasing amount of dust on the asphalt was making him "afraid" to push the limits of his Toyota, having been engaged in a close fought battle with Dani Sordo in fifth.

A strong run through Mittelmosel that was rewarded with the fourth fastest time pushed Elfyn Evans into sixth in the overall classification and a buffer of over 10s back to Andreas Mikkelsen.

Mikkelsen was the slowest Hyundai driver in the morning as he struggled to extract performance from the car and had to adapt his driving style to be "more aggressive on the steering wheel".

Citroen endured a difficult Friday morning as it battled against the dust left behind those running higher up the order and Mads Ostberg's and Craig Breen's relative lack of recent asphalt experience showed.

Breen ended the loop in ninth after getting caught in a freak heavy rain shower, edging out Ostberg by over 4s.