Though Ogier trimmed Toyota driver Tanak's advantage to 10.6 seconds on the short version of the Panzerplatte military range stage that opened the day, Tanak was quicker on the following three stages and is now 14.1s in front.

The better news for Ogier is that his main WRC title rival Neuville has struggled.

Running with a less-than-ideal differential after an oil leak forced a gearbox change on Friday, Neuville was off the pace all morning and coming under increasing threat from a large pack of cars behind.

His Hyundai team-mate Dani Sordo briefly emerged as his main challenger by winning the long Panzerplatte stage and jumping to fourth, before the discomfort that Sordo felt on the Friday vineyard stages returned when the route left the military ranges for the rest of the morning.

Latvala benefited, and a strong run on the loop-closing Romerstrasse stage took him both past Sordo and ahead of Neuville by just 0.1s into third place. 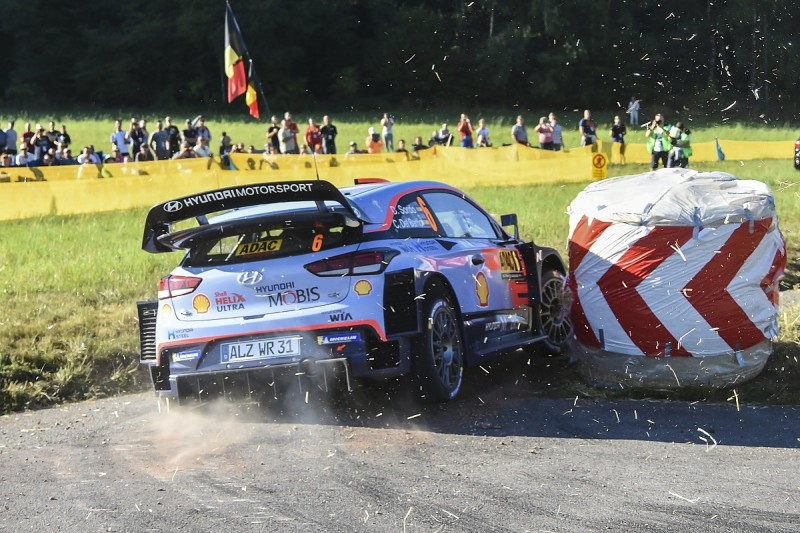 Sordo is only 1.8s behind Neuville in fifth.

Elfyn Evans had finished Friday in fourth place but his speed faded on Saturday morning and he slipped back to seventh before going off the road on Romerstrasse and parking with damage to his M-Sport Ford.

After losing time on Panzerplatte, Esapekka Lappi was fastest on the Freisen stage and is back on the tail of the podium battle in sixth.

Craig Breen, the Romerstrasse pacesetter, is also closing on this group, having dropped Friday rival Andreas Mikkelsen as the Norwegian grappled with the comprehensive driving style change he feels he needs to get on top of the Hyundai.

Mikkelsen is drifting back towards ninth-placed Teemu Suninen, who was pulling away from Mads Ostberg before the Citroen driver struck back with a stronger time on the final stage of the loop.