WRC points leader Sebastien Ogier is already out, having sustained rear suspension damage to his M-Sport Ford on a jump on the third stage of a packed six-stage morning loop.

But his main championship rival Thierry Neuville is only in an off the pace ninth.

Latvala took the lead when Ott Tanak ran wide and damaged a tyre on a rock early on the stage that ended M-Sport team-mate Ogier's day.

Even before that, Latvala had been steadily closing in on Tanak and had got the gap down from 2.2 seconds overnight to 0.3s.

But Lappi was the pacesetter on the following four stages.

His fastest time on Jukojarvi immediately vaulted him from 10th to second place, and he chipped away at the gap to Latvala thereafter before ending the morning just 1.6s behind. 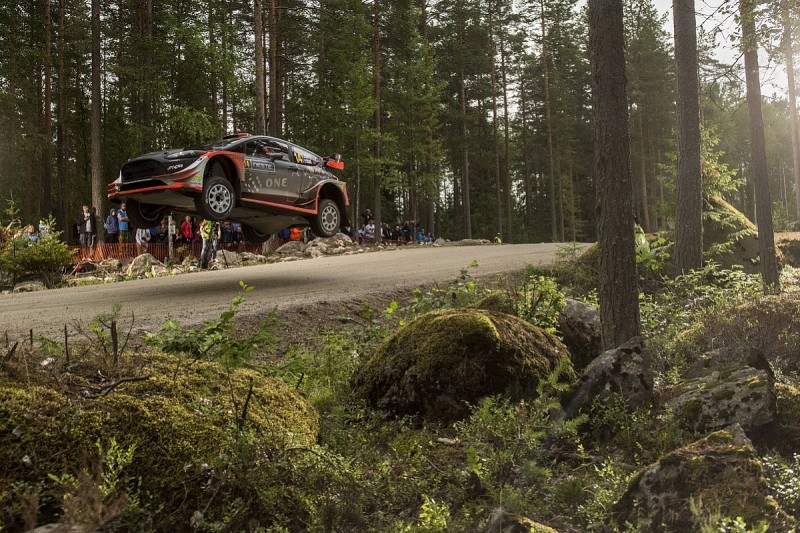 A rapid time on the second run through Jukojarvi allowed Mads Ostberg to jump from fifth to third in his private Ford, as he despatched the battling Craig Breen and Teemu Suninen. Just 0.5s now covers all three.

Juho Hanninen and Citroen's returnee Kris Meeke spent the last stages swapping sixth place, with the Toyota currently ahead by half a second.

Hayden Paddon's brief appearance in third place before breaking his rear suspension has been the only sign of Hyundai pace so far.

Neuville is struggling in ninth, falling away from Elfyn Evans ahead, while Dani Sordo is an even more distant 10th.

Tanak's damage dropped him to 13th, but he swiftly cleared the leading R5 cars and is now closing the gap to Sordo.