Evans's large early lead had been reduced to just 0.6s going into the final stage, and though he initially looked set to hang on a small late error allowed Neuville to grab the victory.

Ford driver Evans had dominated the first half of the rally. DMACK's new-for-2017 soft tyre is harder than the Michelin equivalent and thrived on a hard surface that had been churned up by heavy rain earlier in the week then baked dry as temperatures rose.

Early pressure on Evans from Kris Meeke and Dani Sordo disappeared when the Citroen crashed and the Hyundai broke a steering arm on a rock, and by Saturday morning the DMACK Ford was a minute clear of the opposition.

Then an accumulation of minor problems started to eat into Evans's cushion - two punctures, minor errors, the car's diffuser coming off, a brake worry and a handling issue meant by the end of Saturday he was just 11s clear of Neuville.

He lost another 2.5s to the Belgian on Sunday's opener, and then Neuville's searing pace on the penultimate stage set up the tense decider.

At first it looked good for Evans on the powerstage as he put in an opening split 2.5s better than Neuville's.

Then a slight error running onto a bridge cost Evans momentum and crucial seconds, and at the next timing point he was 1.6s slower than Neuville.

Evans kept fighting and closed a touch, but crossed the line 1.3s off Neuville on the stage and had to concede defeat in the overall battle by a mere 0.7s.

A second straight win for Neuville and a maximum 28-point score given his powerstage pace moves him to within 18 points of leader Sebastien Ogier in the championship. 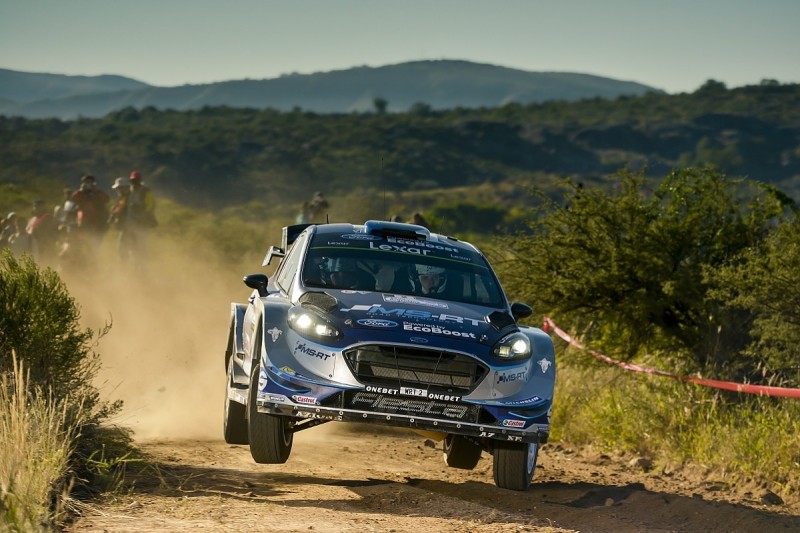 Neuville had spent much of the middle of the rally in a super-close, constantly changing battle for the podium positions that also involved the M-Sport Fords of Ott Tanak (above) and Ogier, privateer Mads Ostberg in only his second WRC appearance of 2017 and Jari-Matti Latvala's Toyota.

Tanak followed Neuville in eventually surging clear of this group, claiming the final podium spot by outperforming his fourth-placed team-mate Ogier - who had a muted rally that included a trip into a ditch due to an incorrect pace note on the first full-length stage, having to dodge a stray dog and a mechanical problem with the rear of his Fiesta on Saturday.

Ostberg's impressive run, which included a spell in second, was interrupted when he broke his Ford's suspension on a rock late on Saturday. He returned under Rally2 to finish ninth.

Latvala fell away from podium contention with a puncture on Saturday and ended up fifth. His Toyota team-mate Juho Hanninen toiled through a weekend of constant mechanical problems for seventh.

Last year's Argentina winner Hayden Paddon rolled on Friday morning and lost touch with the leaders. He limped home sixth in a Hyundai that would only function with rear-wheel-drive on the final stages and then lost its power steering too.

Sordo eventually made it back to eighth place, despite a final-stage puncture that nearly dropped him into Ostberg's range, after Lorenzo Bertelli had a gearbox failure with one stage to go while on course to equal his WRC career best.

Citroen had a terrible weekend. Meeke rejoined under Rally2 for Saturday but had an even bigger crash on the day's final stage.

His team-mate Craig Breen had a gearbox failure on Friday, was halted by an oil leak before he could rejoin on Saturday morning and then finally made it back out on Sunday.

Pontus Tidemand's limited WRC2 opposition mostly hit trouble on the first morning, so the Skoda driver was able to cruise to the class win and 10th overall.