Evans avoided a spate of punctures, technical issues and accidents that affected many of his rivals across the day’s surprisingly rough eight gravel stage.

Evans blitzed the first two stages to grab the lead before losing the advantage to M-Sport’s Sebastien Loeb, after the Frenchman’s victory on Stage 4 put the nine-time world champion into a 0.5s lead.

However, Loeb’s hopes of a second victory of the season, following his Monte Carlo triumph in January, came to an end, courtesy of a rare driver error on the afternoon’s first test.

The M-Sport driver, contesting only selected rounds this year, misjudged a left hander resulting in his Puma sliding into a wall, causing terminal damage to the right rear suspension, ending his his day early.

This allowed Evans to reclaim the lead which he protected despite a late charge from Rovanpera.

Rovanpera’s rise to become Evans’ nearest challenger highlighted the extent of the drama that unfolded, given the Finn faced the worst road conditions opening the road. However, the 21-year-old turned heads tie his pace in tricky conditions to win Stage 7 and 8.

Rovanpera benefited from Loeb’s retirement to sit fourth overall heading into the afternoon. That soon transformed to third when Ogier was forced to exit the rally after picking up two punctures across Stages 6 and 7.

The eight-time world champion suffered a front left failure that lost him two minutes, while the wheel was changed. But a second on the following stage spelled the end of his day having elected not to take two spares. The Frenchman will return to action on Saturday under restart rules.

Despite being second on the road, Neuville had drove smartly to sit second up until a front driveshaft broke on a road section before Stage 8.

The issue affected his front left, and although a fix allowed him to continue, he lost more than minute across the final two stages, dropping him to seventh overall, 1m46.4s adrift of Evans. 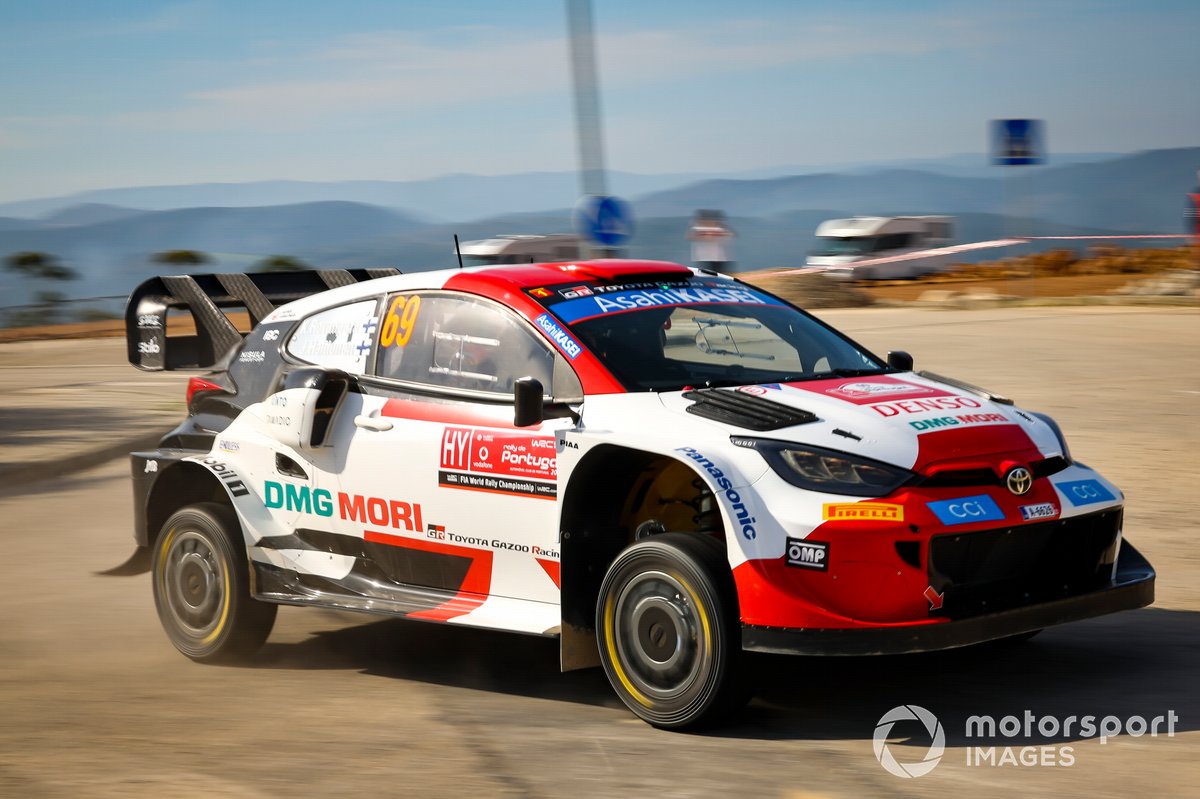 Neuville wasn’t the only Hyundai to hit trouble as Tanak picked up a pair of punctures on Stages 6 and 7 and transmission issue. The Estonian lost more than three minutes, pushing the 2019 champion from fifth to 10th overall.

Sordo in the third Hyundai was able to take advantage of the problems to claim to third by the end of the day, having made a tentative start to his first rally of the season.

Toyota’s Takamoto Katsuta was among the few to avoid incurring a puncture, but did survive a half spin in Stage 6 to come home in fourth, 49.6s behind the lead.

Gus Greensmith led M-Sport’s charge as the Brit completed the eight stages in fifth despite picking up two punctures. The last arrived at Super special head-to-head held on much smoother gravel and tarmac.

Team-mate Pierre-Louis Loubet ended the day in sixth but ran as high as fourth before a wild moment where he left the road at high-speed on Stage 8.

Loubet’s fellow stable mates Craig Breen and Adrien Fourmaux reached service in eighth and ninth overall after the pair were among the puncture list. Breen was also lucky to escape hitting a bank that damaged the right rear of his Puma on Stage 8.