The opening stages held on mountain roads at night proved to be a battle of the two WRC legends that aren't contesting the full 2022 season, as eight-time champion Ogier and nine-time champion Loeb continued their earlier shakedown tussle.

Ogier, eight times a Monte winner, once again showed his class on the chilly asphalt to open out a 6.7-second lead over Loeb, the seven-time Monte winner impressing at the wheel of the new M-Sport Ford Puma on his first WRC event since Turkey 2020.

Elfyn Evans lies third in the second Toyota, 11.2s shy of the lead. While Loeb led M-Sport’s attack, the British squad delivered a strong start to the year with Adrien Fourmaux fourth ahead of impressive team-mate Gus Greensmith.

In his first event with M-Sport since switching from Hyundai, Craig Breen returned to service park in seventh, just behind Hyundai’s Thierry Neuville, who headed a disappointing start for the South Korean marque.

Starting first on the road, Ogier showed no signs of struggle adapting to the new Yaris or new co-driver Benjamin Veillas as he laid down a head-turning time on the 15.20km test, which featured patches of frost.

Although saying at stage end that “he didn’t feel so good”, Ogier held station at the top of the timing screens throughout with nearest rival Loeb, last of the Rally1 drivers the road, clocking in 5.4s adrift.

“We had a good start, but it was really tricky on the top with some wet and icy parts,” said Loeb.

“I didn't want to make a mistake on the ice, so I was a bit too careful there. It feels really good - a lot of power and the feeling with this car is great.” 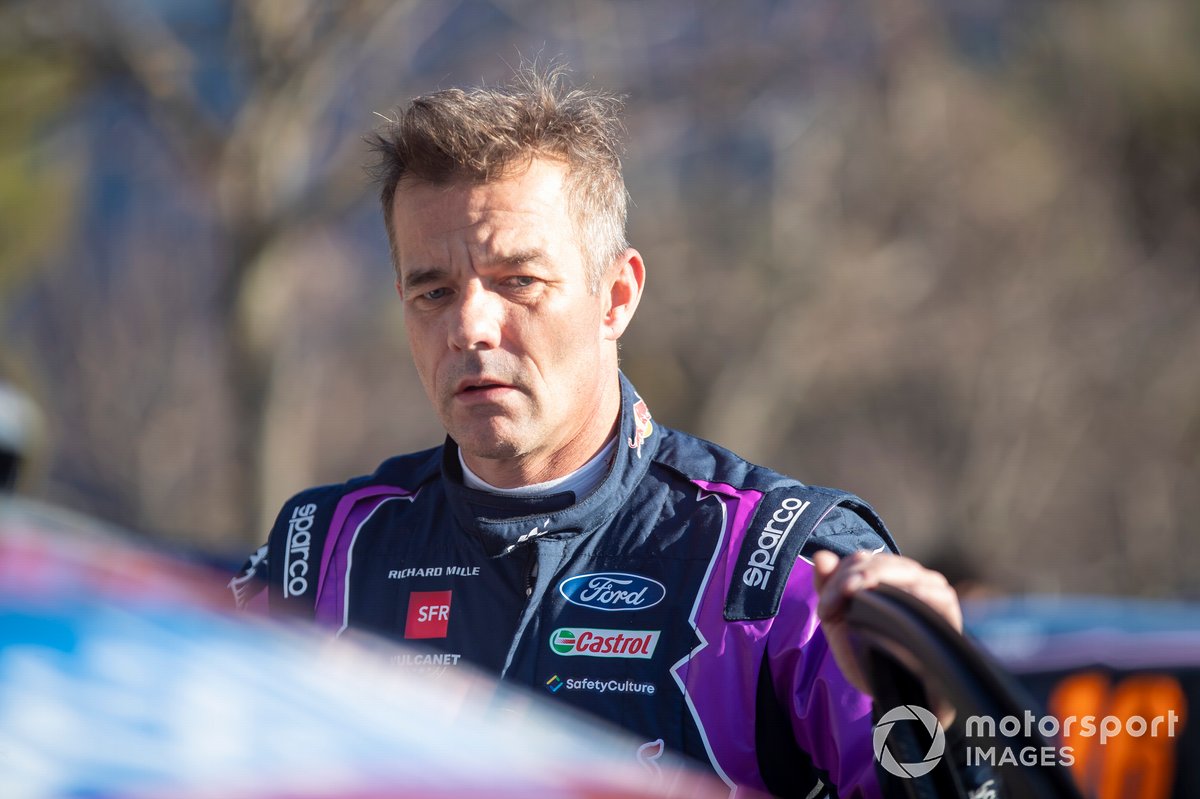 Evans sat second in the times before Loeb’s effort dropped him to third, but the Welshman wasn’t comfortable, labelling his effort “a really bad run”.

M-Sport’s Puma made successful debut with Greensmith, Breen and Fourmaux separated by 1.4s in fourth, fifth and sixth respectively.

Neuville was the quickest Hyundai in seventh as the team’s i20 Ns struggled to match the best from Toyota and M-Sport.

“I couldn't go fast and I lost the brakes and the tyres quite early in the stage," said Neuville, who lost 15.9s to Ogier.

“It's all a bit of a gamble because we only have 20 soft tyres for the weekend. We knew that today we would have to compromise, so hopefully it works out for the weekend.”

Neuville's team-mate Oliver Solberg fared even worse as he was unable to hear his co-driver Elliott Edmondson, ending the stage eighth ahead of fellow Hyundai man Ott Tanak, the 2019 world champion also struggling for pace due to an engine problem - having already been hampered by a mechanical issue during the shakedown.

“It's very annoying, I couldn't hear [Edmondson] in many places - I had to brake and go again, so I lost the rhythm,” explained Solberg.

Toyota duo Takamoto Katsuta and Kalle Rovanpera also encountered dramas, with the latter losing time to a small spin in the stage. 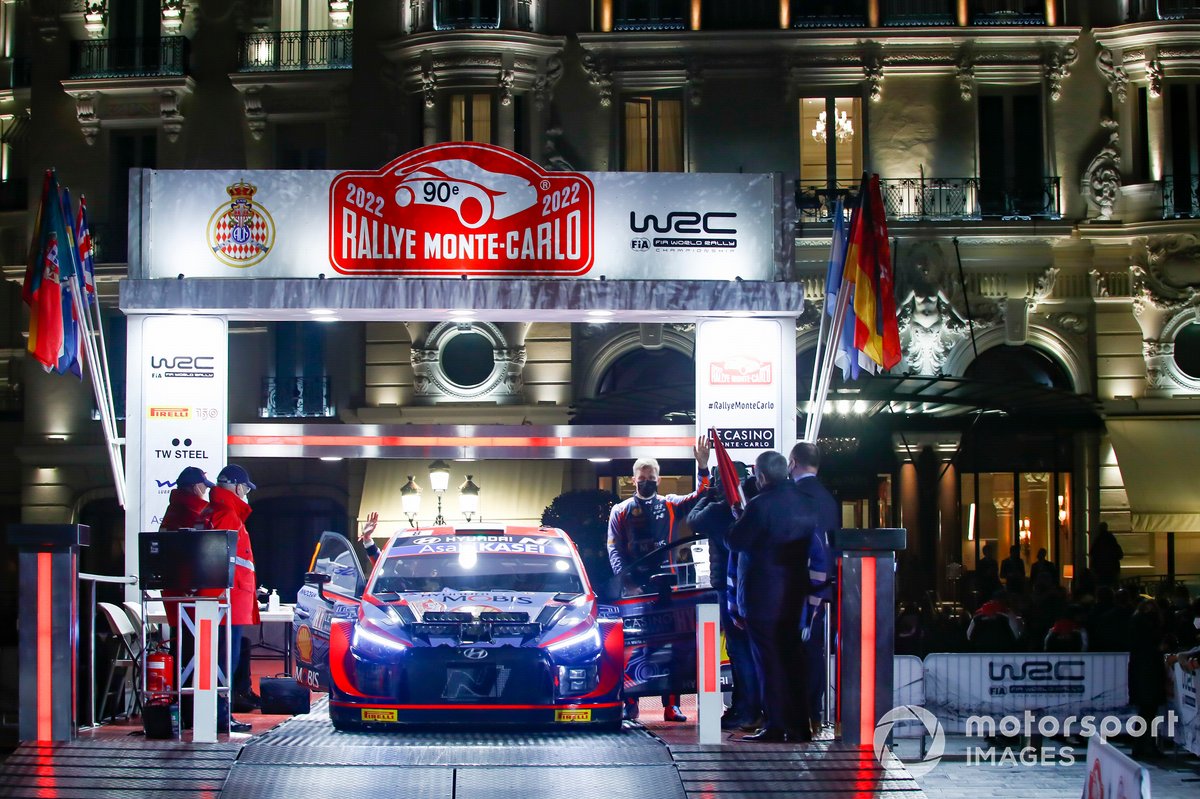 Ogier built on the success on the next test that included the famous Col de Turini section, where fans had gathered in their masses.

The Frenchman wasn’t as dominant but still managed to win the stage by 1.3s from Dakar runner-up Loeb, with Evans 0.6s further back.

The M-Sport Fords continued to shine as Fourmaux and an enthused Greensmith clocked the fourth and fifth fastest stages times.

Neuville provided a much stronger showing, but again was unable to match the outright pace and ended up 12.6s adrift with gearbox oil trailing from his i20 N.

“The brakes were a little bit better,” said Neuville. "It's a bit more bumpy and I had no trust in the car, so I had to keep it neat and tidy.”

Tanak also improved to clock the eighth fastest time, but struggled with a loss of hydraulics. He labelled the day “quite a difficult start”.

Likewise, Solberg’s hearing issues continued, coupled with a half spin at Col de Turini that left him 36.5s behind Ogier.

Rovanpera’s day ended with further disappointment that left the Finn more than a minute adrift, having battled to find a balance in his Yaris.

“I think the balance of the car is really tricky for me to drive,” said Rovanpera. “I tried to do my best to adapt for it, but if the balance is a bit more to the understeering in side then it's quite difficult for me.”

The Monte Carlo Rally continues on Friday with a further six stages scheduled, beginning at 08:14 GMT.