Ott Tanak emerged as the man to beat on the opening loop of stages at Rally Finland as Hyundai surprised favourites Toyota.

Tanak claimed a stage win on the final high-speed gravel test of the morning to open up a 1.7s lead over Hyundai team-mate Craig Breen, who won the second stage of the day.

Toyota had been billed as the rally favourites leaving Tanak to admit he would need to "throw everything in" to challenge the Japanese marque.

However, after the first trio of tests it was Esapekka Lappi, competing in a one-off rally, that was the best-placed Toyota in third overall, some 5.4s adrift, but ahead of team-mate Elfyn Evans. Rally favourite Kalle Rovanpera was 7.8s in arrears in fifth after a solid start to his home event.

Thierry Neuville ended the loop in sixth ahead of championship leader and road-sweeper Sebastien Ogier, 15.6s back from the leader.

Takamoto Katsuta claimed the only stage win for Toyota on the rally opener, before producing arguably the save of the season to prevent a huge accident on the second stage. The M-Sport Ford duo of Gus Greensmith and Adrien Fourmaux rounded out the top 10.

The rally began with a short 2.31km blast through the tarmac streets and gravel roads of host city Jyvaskyla in front of a bumper crowd.

While there was plenty of expectation on the Finns to shine, it was Jyvaskyla-based Japanese driver Katsuta that claimed the stage win.

The Toyota driver, running with his third different co-driver in as many events, blitzed the stage with his new navigator Aaron Johnston to pip Hyundai’s Neuville by 0.2s.

Lappi made a strong start to his WRC return by putting his Toyota in third only a tenth further back and 0.1s ahead of Tanak.

M-Sport’s Fourmaux, also driving with a new co-driver in Alexandre Coria, was fifth quickest ahead of Ogier, Evans and Breen, who reported issues with his Hyundai. 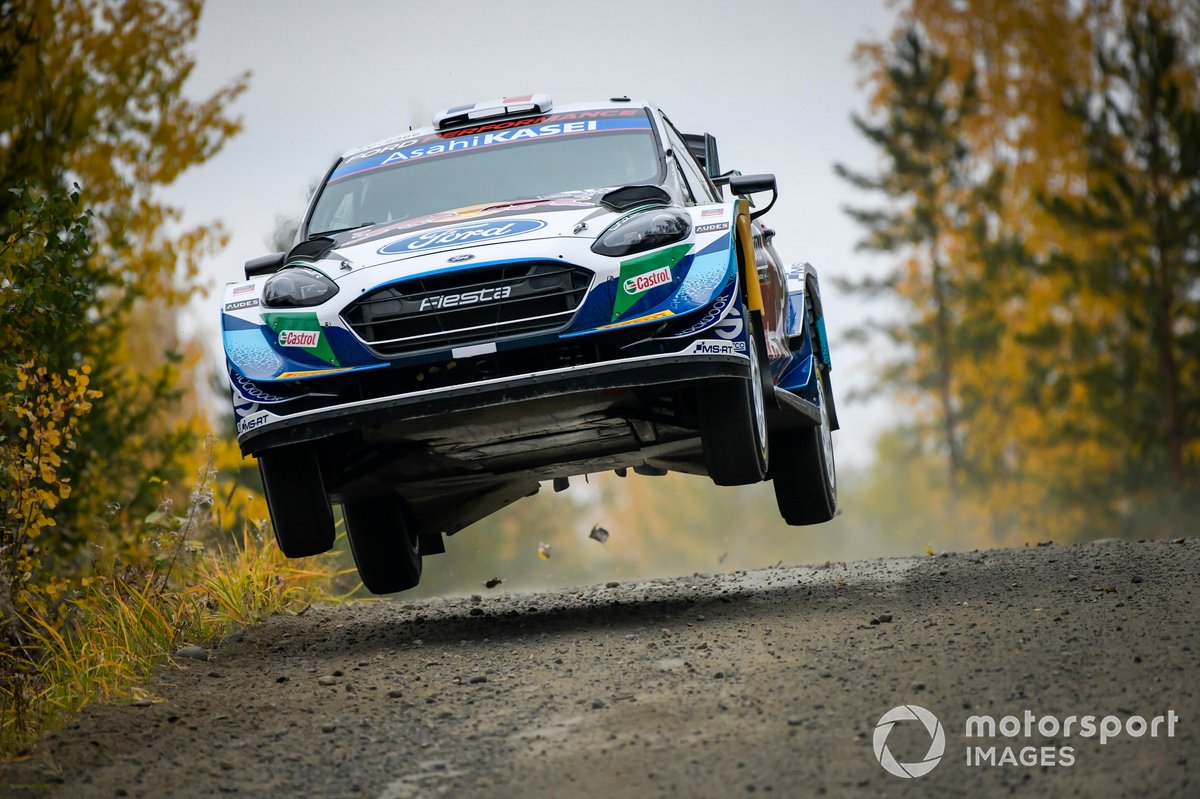 Rovanpera was surprisingly only ninth while Greensmith completed the WRC runners.

Any worries about car pace for Breen were put to one side on the first proper gravel stage of the event, as the Irishman won the second stage by 0.3s from team-mate Tanak.

"I’m on top of the word. It's so, so nice. You can be so committed and I don't have the words for it. It's absolutely amazing,” said Breen.

Evans was the best of the five Toyotas in third some 1.2s adrift, but ahead of Rovanpera and Lappi, who continued to impress on his return. Ogier was five seconds shy in sixth, 0.7s faster than Neuville.

Rally leader heading into the stage, Katsuta, was lucky to avoid a high-speed accident after a wild sixth gear 360-degree spin on a left hander. After initially stalling his Yaris, he managed to re-fire the car and reach the stage end, but dropped 21.2s in the process.

"In a very high-speed corner there was a bump inside and we kicked out from the bump,” said Katsuta. “Luckily we didn't hit anything. We are here and it's fine - these things can happen in this rally."

Tanak then delivered the drive of the morning to win the final stage of the loop by a second from Breen, with Lappi the best of the Toyotas in third.

Rovanpera could only manage the fourth best time, 3.9s slower than Tanak across the 21.37km test, as Hyundai dominated the early running.

The rally continues this afternoon with a second run through stages two and three before the infamous Oittila (19,75km) night stage, that has been labelled as the toughest of the entire rally.