Breen managed to close the gap to Tanak across the evening’s three stages before starring in the darkness to open up 2.8s lead over his team-mate.

Tanak began the afternoon by winning Stage 4 but Breen responded to win the next test to close the gap to 1.5s, before finishing third fastest on the night stage that was won by Toyota’s Elfyn Evans.

The event’s first night stage since 1994 provided a significant challenge resulting in the field closing up significantly.

Only 7.9s covers the top five as title contender Evans, courtesy of his stage win, moved to third overall 6.1s shy of the lead. Wildcard Toyota runner Esapekka Lappi turned heads on his WRC return and ended the day 0.6s slower than Evans, while rally favourite and Toyota team-mate Rovanpera fought back to complete the loop in fifth overall.

Thierry Neuville was more than half a minute adrift after losing confidence in the night, with championship leader and road sweeper Sebastien Ogier seventh. M-Sport Ford duo of Gus Greensmith and Adrien Fourmaux rounded out the top 10 behind Toyota’s Takamoto Katsuta.

Tanak picked up where he left off after the morning loop and was even faster after completing a set-up tweak on his i20 before the afternoon and evening stages.

The 2019 world champion claimed his second stage win of the event on stage 4, the second pass of Ässämäki to further extend his lead.

"I changed the car balance a bit and it's following a bit better,” said Tanak. “The feeling is coming step by step and we are learning, so it's getting better."

After struggling with his set-up, Rovanpera responded to set the second fastest time, 1.8s adrift of Tanak.

"I think our set-up is just not so good on the first pass,” said Rovanoera. “That’s my mistake from the testing and I think it's not so easy to fix that now during the rally. I can't do much more than this if somebody is much faster."

Breen dropped 2.1s to team-mate Tanak to set the third fastest time but the Irishman complained of a loose rear diffuser.

Evans was fourth quickest a tenth faster than Neuville while Lappi slotted into sixth as Katsuta edged Ogier, hampered by opening the road.

Rovanpera looked to have secured his first stage win of the rally on the next test only to be denied by Breen, who pipped the Finn by a second. 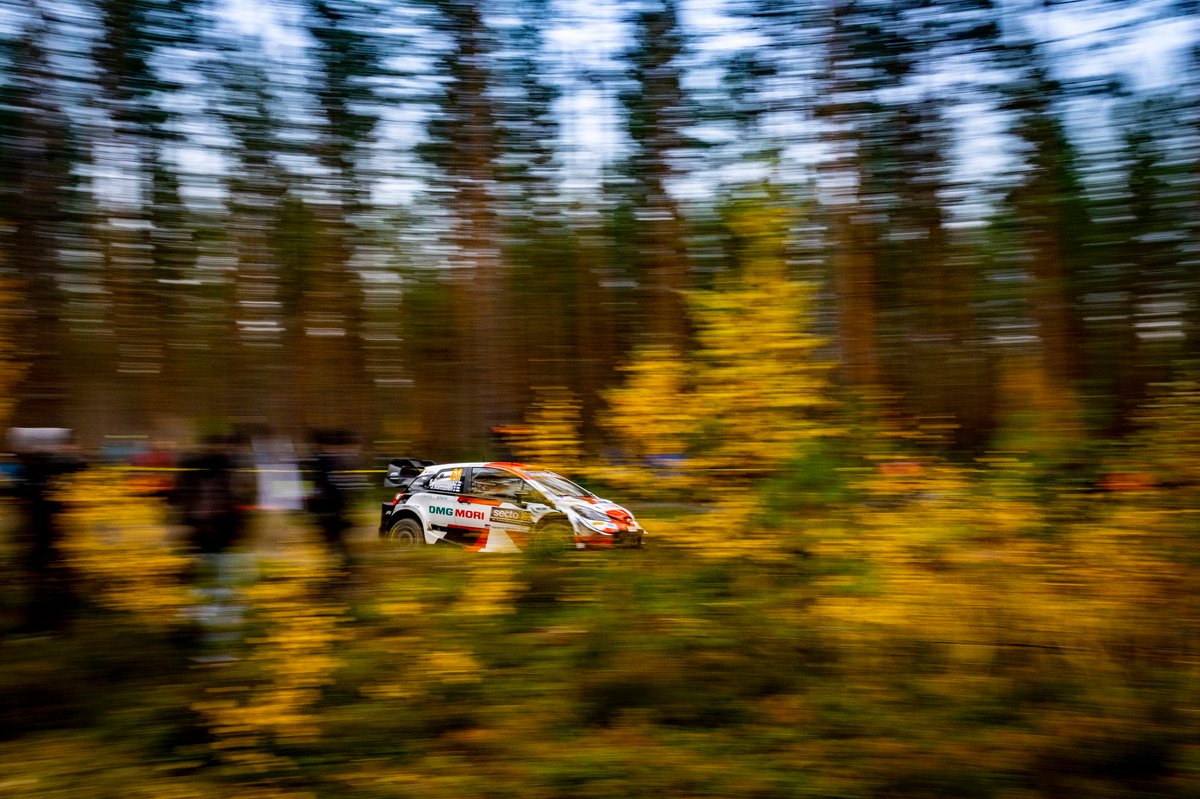 However, Rovanpera jumped to third overall after clawing 1.3s back from rally leader Tanak, who was third fastest, as the Estonian’s overall lead over Breen shrunk to 1.5s.

Lappi once again turned heads to end the stage only 2.9s adrift of the pace and comfortably faster than full-timers Evans, Neuville, Katsuta and Ogier.

Labelled the toughest stage of the rally, the night time run through Oittila lived up to the moniker.

Evans was among the drivers to have the best of the light and the Welshman made the most of it to win the stage.

However, Evans’ time was severely threatened by Lappi, who threw caution to the wind, and survived a wild moment close to the finish to end up only 1.6s shy and second fastest.

Unlike the Toyota team, which completed a night test prior to the event, the Hyundai drivers went into the stage blind. However, it didn’t stop Breen from posting the third fastest time, which would secure the 31-year-old the overall lead.

“It's amazing. I always questioned what Finland would be like in the dark and now we've felt it and witnessed it,” said Breen. “It's absolutely incredible. My lights weren't 100% to be honest, I have a bit of work to do on them, but it's just incredible."

Rovanpera managed to haul himself closer to the lead by setting the fourth fastest time, ahead of Ogier, who had the best of the light, while Tanak was sixth quickest.

Neuville admitted the darkness sapped his confidence which resulted in him dropping back from the pack.

"I just couldn't commit to it and the visibility was quite poor,” said Neuville. “My lights weren't nice and I didn't want to do a mistake because it would have been stupid."

Rally Finland continues on Saturday, the longest day of the event, with the field set to tackle nine special stages.