Kalle Rovanpera took a sensational first WRC podium in the second Toyota, with the teenager beating team-mate Sebastien Ogier in a final-stage shootout.

Evans's victory puts him into the joint lead of the championship on 42 points with Thierry Neuville, who bagged four Powerstage points and sixth place. Evans also becomes the first British driver to win Rally Sweden.

Unseasonal weather conditions in the Varmland region forced organisers to reduce the running substantially, with just nine of the original 19 stages taking place in order to preserve the roads.

Evans kicked off proceedings on Friday morning with the fastest time on the Hof-Finnskog test, beating Tanak by 1.1s, before Tanak hit back on Finnskogen (SS3) to reduce the lead gap to just under a second.

But Tanak lost almost eight seconds on the final stage before service (Nyckelvattnet), and lost second place to Evans's 19-year-old team-mate Rovanpera, who starred on the opening day.

Evans extended his lead to more than 16 seconds over Tanak on Saturday, winning three out of four stages, with Neuville claiming his only stage win on the Torsby Sprint at the end of the day.

Behind the leading two, Rovanpera and six-time world champion team-mate Sebastien Ogier were embroiled in an epic squabble for the final podium position; the pair swapping places over the course of the day, with Ogier taking a lead of half a second into Sunday's Powerstage.

Rovanpera put in a stunning drive to win the Likenas Powerstage, though, in turn beating Ogier by 3.4s to claim his first podium finish on just his second WRC start. 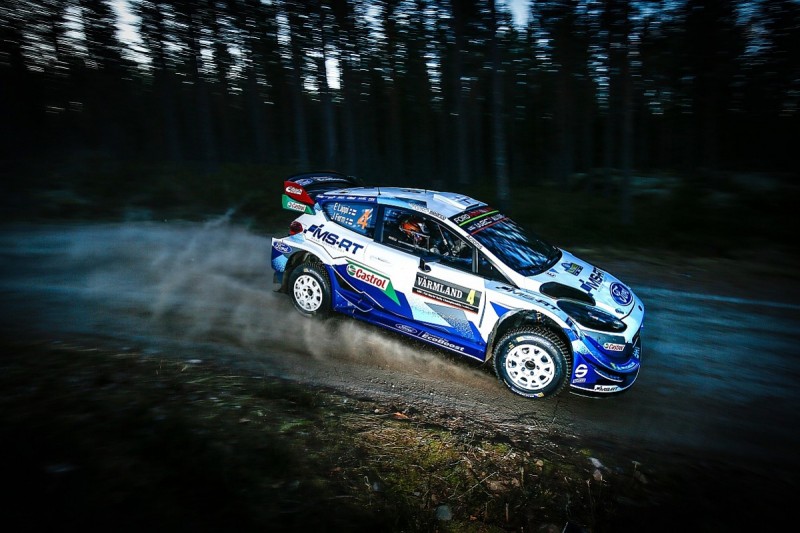 Esapekka Lappi was the best of the M-Sport Fords in fifth, with the Finn just edging Neuville by a slender 1.4s at the finish.

Neuville struggled throughout the weekend with road conditions being first on the road, with the Belgian admitting to a "lack of confidence" during Friday's opening loop.

Things did not get that much better on Saturday as the stages became far wetter and muddier than the opening day.

Craig Breen finished seventh on his first WRC appearance of the season in the third Hyundai. The Irishman was left somewhat disadvantaged on Friday as his early road position could not be maximised due to the shortened opening loop.

Breen finished 23.6s ahead of M-Sport's Teemu Suninen, who bounced back from a scare on Thursday's shakedown to end up eighth ahead of Katsumoto Kasuta's Toyota.

The Finn suffered a spin early on Friday and then an apparent electrical issue forced he and co-driver Juho Hanninen to retire at the end of the day.

The pair were beaten by Hyundai's WRC3 runner Jari Huttunen, who finished 10th overall and best of the R5 cars.

Evans has Toyota, Makinen permission to fight for WRC title