Sebastien Ogier sealed the 2017 World Rally Championship with third place for M-Sport on Rally GB, as Elfyn Evans claimed a dominant first win for himself and DMACK

Wales was tipped as one of the events where DMACK's tyre would be advantageous, and Evans used it to dominate from the start of the forest stages on Friday morning.

This time there would be no repeat of the late heartbreaks that denied DMACK with Ott Tanak in Poland last season and Evans in Argentina earlier this year.

Evans and co-driver Dan Barritt got their lead up to close to a minute by the rally's halfway point and then protected it to the finish, ultimately winning by a commanding 37.3 seconds.

The intrigue was all in the championship fight, with Thierry Neuville and Ott Tanak needing to outscore Ogier in Wales by eight and seven points respectively to maintain even a mathematical possibility of denying him in Australia next month.

Neuville recovered from a scrappy start to advance up the order and reach second during Saturday, while Ogier began to struggle for pace and slipped back to fourth behind Tanak.

Then heavy fog on the first of Saturday's two night stages prompted a huge shake-up.

Neuville and Tanak both struggled, falling from second to third and third to sixth respectively.

Ogier went off the road, picked up a puncture then had to tackle the day's final stage with only three working brakes due to damage - yet in a "miracle" drive still managed to end the evening in second place.

Neuville quickly regained second on Sunday morning and pulled away from Ogier, but knew that wouldn't be enough to prolong the title fight unless Ogier was further demoted.

Though Jari-Matti Latvala, Andreas Mikkelsen and Tanak all closed in on Ogier, with the quartet covered by just 7.5s going onto the final stage, the champion held third place and picked up a couple of powerstage bonus points to put the matter beyond doubt. Even Neuville's powerstage victory couldn't stop Ogier and co-driver Julien Ingrassia sealing a fifth consecutive championship a round early.

Mikkelsen grabbed fourth from Latvala on the penultimate stage, finishing just 0.5s ahead. Latvala had thrust himself and Toyota into podium contention by setting the pace in Saturday night's fog.

Tanak backed right off on the powerstage to help ensure Ogier had a clear run at bonus points but still finished sixth and helped M-Sport clinch its first manufacturers' championship as a private team and its first since winning with Ford in 2007.

A minor error on Saturday and then a partially-broken rear wing dropped him away from the podium fight.

Hyundai fielded four cars for GB in a bid to keep its title hopes alive, but only Neuville and Mikkelsen were on the pace.

Apart from a burst of pace when the fog hit on Saturday night, Hayden Paddon had a low-key run to a distant eighth.

Dani Sordo lost huge ground in the fog and finished 10th on his last appearance of the season, behind Esapekka Lappi - who never got comfortable in the Toyota all weekend. 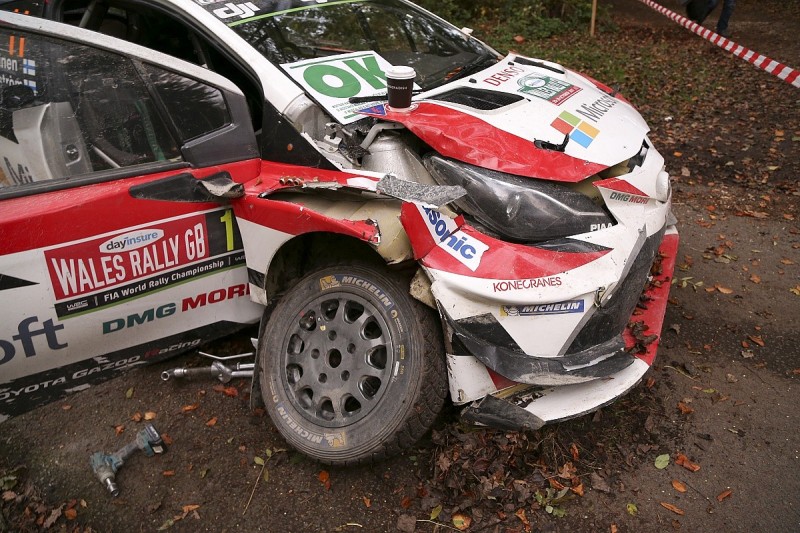 Juho Hanninen, in his final competitive outing for Toyota as it is only taking two cars to Australia and dropping him for 2018, was charging towards Paddon and Sordo when he had an embarrassing crash on Saturday's short Cholmondeley Castle spectator stage.

Hanninen was the only World Rally Car retiree who didn't rejoin under Rally2.

Craig Breen went off on Friday but picked his way back up from 36th to 15th, while Mads Ostberg was still plagued by electrical problems even after rejoining for the final day.