Jari-Matti Latvala's retirement while inching away in the rally lead on the second running of Ouninpohja left his team-mate Lappi facing an untroubled run towards a win on his home World Rally Championship round, in only his fourth start in the series' top class.

Finns still hold a 1-2-3 at home, but Toyota's one-two has been disrupted by Suninen - in only his second World Rally Car start - getting ahead of Juho Hanninen by going quickest on Saturday's penultimate stage Pihlajakoski.

A rollbar problem caused Hanninen to back off slightly, and as well as falling 4.3s behind Suninen he is also now just 1.3s ahead of flying DMACK Ford driver Elfyn Evans - who won the concluding Paijala stage. 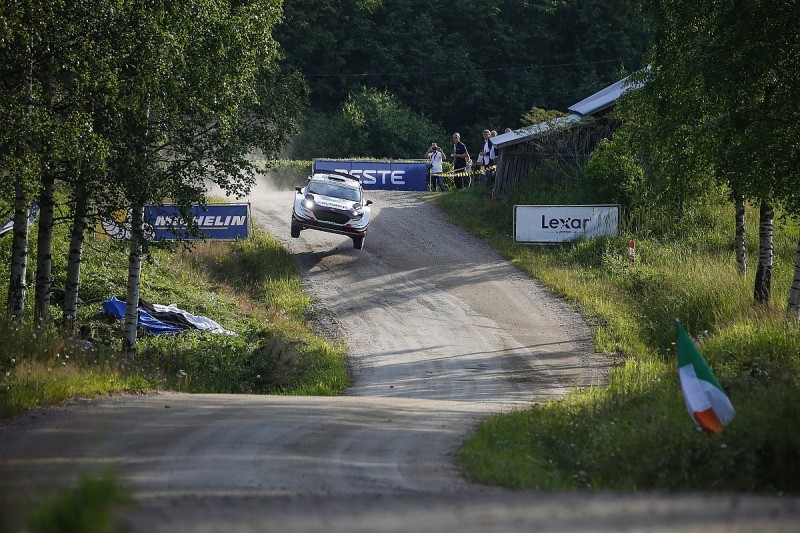 Thierry Neuville is now up to sixth place and closing on Craig Breen ahead as he tries to take advantage of WRC title rival Sebastien Ogier's absence following his heavy Friday morning crash.

Hyundai has been off the pace all weekend, but Neuville felt the cleaner road conditions of the afternoon loop helped make the car handle the best it had so far and he closed to within 14s of Breen's Citroen.

Ogier may yet rejoin to go for powerstage points on Sunday, subject to the outcome of further medical tests on his concussed co-driver Julien Ingrassia.

He picked up that spot when Kris Meeke sustained a puncture on the last stage, though Tanak had been on course to overhaul the Citroen regardless.

At the foot of the top 10, the delayed Mads Ostberg is charging up behind Dani Sordo for ninth.